Editor's Note:  Internationalists have been trying to bring down the United States for a long, long time.  Here's an example from over 85 years ago.  And, like always, none of these people were ever prosecuted.

In 1933, Marine Corps Major General Smedley Butler was approached by a wealthy group of industrialists and bankers called the "American Liberty League", including Prescott Bush (George W. Bush's grandfather) who asked him to command a rogue army of 500,000 veterans that would help stage a coup to topple then President Franklin Delano Roosevelt. In 1934 Butler testified to the McCormack--Dickstein Congressional committee on these claims. In the opinion of the committee, these allegations were credible. One of the purported plotters, Gerald MacGuire, vehemently denied any such plot. In their report, the Congressional committee stated that it was able to confirm Butler's statements other than the proposal from MacGuire which it considered more or less confirmed by MacGuire's European reports. No one was prosecuted.

In 1936, William Dodd, the U.S. Ambassador to Germany, wrote a letter to President Roosevelt in which he stated, "A clique of U.S. industrialists is hell-bent to bring a fascist state to supplant our democratic government and is working closely with the fascist regime in Germany and Italy. I have had plenty of opportunity in my post in Berlin to witness how close some of our American ruling families are to the Nazi regime.... A prominent executive of one of the largest corporations, told me point blank that he would be ready to take definite action to bring fascism into America if President Roosevelt continued his progressive policies. Certain American industrialists had a great deal to do with bringing fascist regimes into being in both Germany and Italy. They extended aid to help Fascism occupy the seat of power, and they are helping to keep it there. Propagandists for fascist groups try to dismiss the fascist scare. We should be aware of the symptoms. When industrialists ignore laws designed for social and economic progress they will seek recourse to a fascist state when the institutions of our government compel them to comply with the provisions." The proven record of Prescott Bush's involvement in financing the Nazi war machine dovetails with the fact that he was part of a criminal cabal that actively sought to impose a fascist coup in America.

President George Walker Bush's grandfather (Prescott Bush) and great grandfather (George Herbert Walker) were among Wall Street's ultra-right wing elite. Before WWII, they were among the key players who coordinated the flow of investments from American multimillionaires into Germany. They profited by helping to coordinate the American financing behind Hitler's rise to power. During the war, they even profited from companies that armed the Nazi war machine and used slave labour at Auschwitz. Then, after the war, Prescott Bush was instrumental in helping to launder Nazi loot for Fritz Thyssen, who was one Hitler's earliest and richest industrialist backers.

The following drawing is of the intricate structure of the organizations and people involved in this plot.  Remember this was back in the 1930's.  Imagine what kind of convoluted schemes they have going on now with all the technology at their fingertips.

People often have a hard time imagining how a small group of people can control so much.  Well, this diagram shows you how.  There are only 8 basic groups controlling all the rest, which really only amount to roughly 50 other groups.  When you have virtually unlimited resources, you can hire as many people as you need to implement every devious little scheme you could imagine.  And with the technology available to them today, especially computers, it's not that difficult. 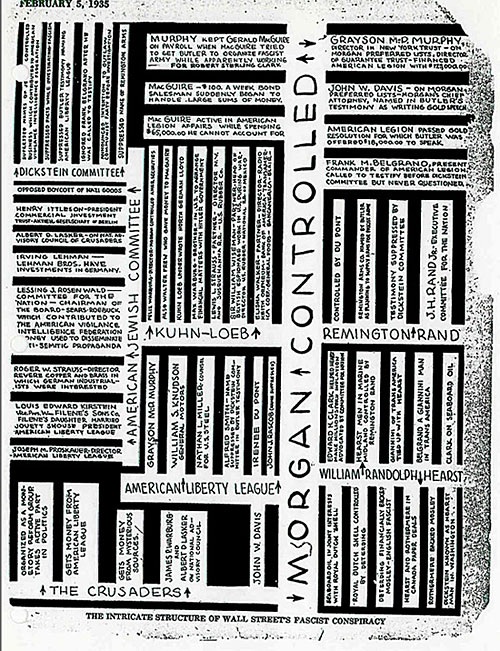 If you'd like the entire newspaper articles from 1935 in PDF format, just click on the following thumbnail image. 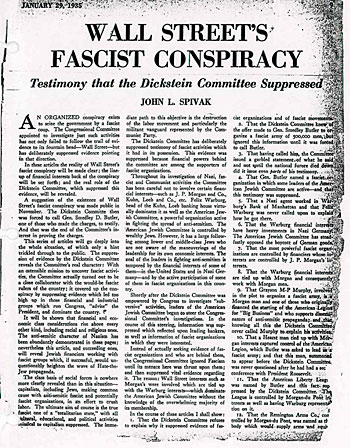 Trackback URL for this entry: https://kickthemallout.com/trackback.php/V-Attempt_To_Overthrow_FDR