International best-selling author, Dr. Vernon Coleman MB ChB DSc FRSA, looks at why people wear masks and how their willingness to do so threatens all of us in every possible way. Dr. Coleman also explains why maks are now creating an epidemic of bacterial pneumonia, and he explains why the British Government's advice means that he believes that no one has to wear a mask.

To download a free copy of Dr Coleman's book about the dangers of masks please visit http://www.vernoncoleman.com

This presentation by Jerry Day details how global interests have hijacked normal seasonal coronavirus illnesses and employed totally bogus testing to manufacture a FAKE pandemic in order to provide cover for what is now being called "the Great Reset". Jerry highlights a very plausible argument for what the deliberate destruction of global economies under the cover of medical necessity is really providing cover for.

Once again David Icke exposes the TRUTH about what's been done and continues to be done to free humanity by the INSANE GLOBALIST CULT that is hell-bent on destroying the economies of the world so they can impose their Draconian, tyrannical global system of control. 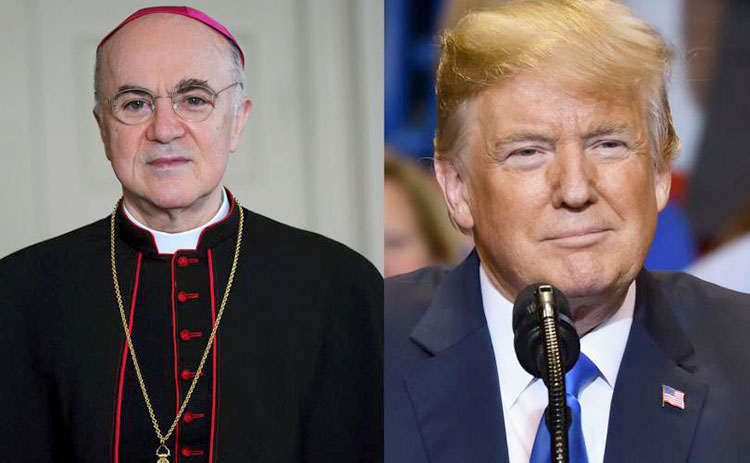 It is you, dear President, who are 'the one who opposes' the deep state, the final assault of the children of darkness,' His Excellency wrote. 'Place your trust in the Lord.'

October 30, 2020 (LifeSiteNews) – His Excellency, Archbishop Carlo Maria Viganò, has written yet another open letter to President Donald J. Trump. Read it in its entirety below. It is available in PDF by clicking here. Read it in Italian here.

OPEN LETTER TO THE PRESIDENT OF THE UNITED STATES OF AMERICA

Solemnity of Christ the King

Allow me to address you at this hour in which the fate of the whole world is being threatened by a global conspiracy against God and humanity. I write to you as an Archbishop, as a Successor of the Apostles, as the former Apostolic Nuncio to the United States of America. I am writing to you in the midst of the silence of both civil and religious authorities. May you accept these words of mine as the “voice of one crying out in the desert” (Jn 1:23).

As I said when I wrote my letter to you in June, this historical moment sees the forces of Evil aligned in a battle without quarter against the forces of Good; forces of Evil that appear powerful and organized as they oppose the children of Light, who are disoriented and disorganized, abandoned by their temporal and spiritual leaders.

Daily we sense the attacks multiplying of those who want to destroy the very basis of society: the natural family, respect for human life, love of country, freedom of education and business. We see heads of nations and religious leaders pandering to this suicide of Western culture and its Christian soul, while the fundamental rights of citizens and believers are denied in the name of a health emergency that is revealing itself more and more fully as instrumental to the establishment of an inhuman faceless tyranny.

A global plan called the Great Reset is underway. Its architect is a global élite that wants to subdue all of humanity, imposing coercive measures with which to drastically limit individual freedoms and those of entire populations. In several nations this plan has already been approved and financed; in others it is still in an early stage. Behind the world leaders who are the accomplices and executors of this infernal project, there are unscrupulous characters who finance the World Economic Forum and Event 201, promoting their agenda.

Welcome back to New World Next Week — the video series from Corbett Report and Media Monarchy that covers some of the most important developments in open source intelligence news.

Fasten your seat belts. This criminal global COVID Pandemic Hoax is the pretext for imposing this sickening EVIL plan for all of free humanity! This is a portion of a presentation given by Dr. Rashid A. Buttar regarding a leak out of Canada that details exactly how the Globalist Psychopaths intend to impose their Draconian Global Big Brother Police State.

No matter what you may think of Donald Trump . . . this election will determine whether the Marixts/Globalists rule this planet with their boot on our faces FOREVER, or we continue to reclaim our Republic, our God-Given Liberties, and a thriving economy and middle class. The so-called GREAT RESET is just the latest "rebranding effort", the latest con job for the same old shit from the likes of George Soros and all his evil minions for a sick, twisted vision of them ruling over the entire planet.

You've all heard by now that The Great Reset is upon us. But what is The Great Reset, exactly, and what does it mean for the future of humanity? Join James for this in-depth exploration of the latest rebranding of the New World Order agenda and its vision of a post-human Fourth Industrial Revolution.