Episode 91: Scott Adams talks with the amazing Bill Pulte, founder of Blight Authority, about a solution to urban decay/crime.

'Men in America': Having a father at home is a sign of affluence. But it is also a cause of affluence, especially for boys. Boys who grow up with a father at home earn much more as adults. Boys who grow up alone with their mothers tend to earn less. They also have more disciplinary problems in school. They read less, and less well. They're less likely to graduate high school or go to college. They are more likely to be unemployed and to live in poverty.

We are caught in a vicious cycle.

With alarming regularity, the nation is being subjected to a spate of violence that terrorizes the public, destabilizes the country’s fragile ecosystem, and gives the government greater justifications to crack down, lock down, and institute even more authoritarian policies for the so-called sake of national security without many objections from the citizenry.

This shooting, which is being chalked up to mental illness by the 19-year-old assassin, came months after a series of mass shootings in late 2017, one at a church in Texas and the other at an outdoor country music concert in Las Vegas. In both the Texas and Las Vegas attacks, the shooters were dressed like a soldier or militarized police officer and armed with military-style weapons.

As usual following one of these shootings, there is a vocal outcry for enacting more strident gun control measures, more mental health checks, and heightened school security measures.

Also as usual, in the midst of the finger-pointing, no one is pointing a finger at the American police state or the war-drenched, violence-imbued, profit-driven military industrial complex, both of which have made violence America’s calling card.

Ask yourself: Why do these mass shootings keep happening? Who are these shooters modelling themselves after? Where are they finding the inspiration for their weaponry and tactics? Whose stance and techniques are they mirroring?

Mass shootings have taken place at churches, in nightclubs, on college campuses, on military bases, in elementary schools, in government offices, and at concerts. In almost every instance, you can connect the dots back to the military-industrial complex, which continues to dominate, dictate and shape almost every aspect of our lives.

We are a military culture engaged in continuous warfare.

We have been a nation at war for most of our existence.

We are a nation that makes a living from killing through defense contracts, weapons manufacturing and endless wars.

We are being fed a steady diet of violence through our entertainment, news and politics.

All of the military equipment featured in blockbuster movies is provided—at taxpayer expense—in exchange for carefully placed promotional spots.

This is a very good analysis of an interview Jordan Peterson did with Vice about the dynamic between men and women in the workplace and how ridiculous social justice values have moved from the college campuses into every aspect of life including the workplace. 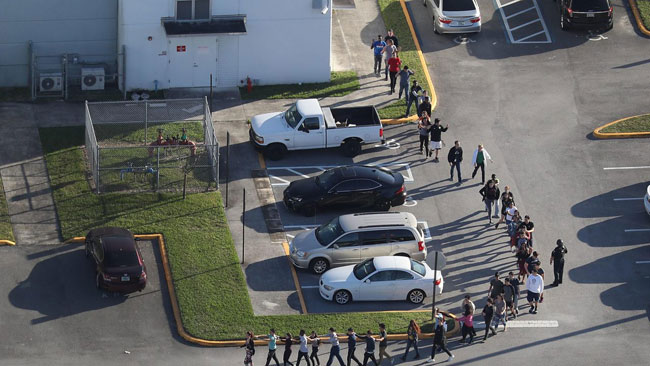 Kelly Guthrie Raley was named “Teacher of the Year” at her Florida school, Eustis Middle School, for the 2017-2018 school year last month, according to Fox News. But now she’s being recognized for her cultural commentary following the tragic Florida school shooting.

In a Facebook post that’s gone mega-viral, Ms. Raley analyzes American culture at-large and how it contributed to Wednesday’s shootings and other previous mass shootings.

What did she say?

Raley did not hold anything back. She wrote:

Until we, as a country, are willing to get serious and talk about mental health issues, lack of available care for the mental health issues, lack of discipline in the home, horrendous lack of parental support when the schools are trying to control horrible behavior at school (oh no! Not MY KID. What did YOU do to cause my kid to react that way?), lack of moral values, and yes, I’ll say it-violent video games that take away all sensitivity to ANY compassion for others’ lives, as well as reality TV that makes it commonplace for people to constantly scream up in each others’ faces and not value any other person but themselves, we will have a gun problem in school. Our kids don’t understand the permanency of death anymore!!!

The middle school teacher then told parents they need to “STEP UP,” explaining that much of the cultural problem begins at home.

“My parents NEVER supported any bad behavior from me. I was terrified of doing something bad at school, as I would have not had a life until I corrected the problem and straightened my a** out. My parents invaded my life,” Raley wrote.

“They knew where I was ALL the time. They made me have a curfew. They made me wake them up when I got home. They made me respect their rules. They had full control of their house, and at any time could and would go through every inch of my bedroom, backpack, pockets, anything!” she explained.

“Parents: it’s time to STEP UP! Be the parent that actually gives a crap! Be the annoying mom that pries and knows what your kid is doing. STOP being their friend,” Raley charged.

Raley wanted to emphasize that her post had nothing to do with the conversation about guns or gun control. She wrote:

This post wasn’t about gun control. This was me, loving the crap out of people and wanting the best for them. This was about my school babies and knowing that God created each one for greatness, and just wanting them to reach their futures. It’s about 20 years ago this year I started my teaching career. Violence was not this bad 20 years ago. Lack of compassion wasn’t this bad 20 years ago. And God knows 20 years ago that I wasn’t afraid daily to call a parent because I KNEW that 9 out of 10 would cuss me out, tell me to go to Hell, call the news on me, call the school board on me, or post all over FaceBook about me because I called to let them know what their child chose to do at school…because they are a NORMAL kid!!!!!

The post, published Thursday morning, has received more than 700,000 reactions and nearly 600,000 shares. 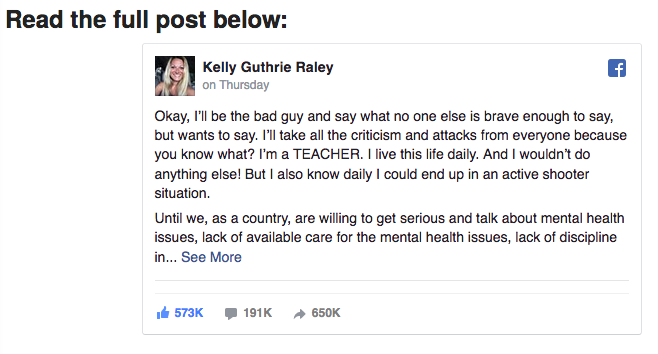