This in-depth, 4 part investigation was aired then immediately banned and removed from the Fox archives right after 9-11, a lot have people still have never seen it and is a must for the first step in the process.  Gee, you think Israel has have power over what you are allowed to see and hear?  Hardly anyone is aware of this info.

9/11, as we were told repeatedly in the days, weeks, and months after the attack, was the day that changed everything. And now a new event has come along to once again throw the world into chaos. But whereas the post-9/11 era introduced America to the concept of homeland security, the COVID-19 era is introducing the world to an altogether more abstract concept: biosecurity. This is the story of the COVID-911 security state.

Rating: 0.00/5 (0 votes cast)
By Michael Welch, Richard Gage, Dr. Leroy Hulsey, Barbara Honneger, and Christopher Gioia
“The worst act of terrorism in the history of our country which claimed almost 3000 innocent lives and which dramatically altered the course of our nation and the world and it had a proposed deadline of just 18 months which was extended by two months, and it had an initial budget of just 3 million dollars. Remember what the chairman and the vice-chairman of the 9/11 Commission said. They were set up to fail, and they were starved of funds to do a proper investigation. Who could have imagined that?”

LISTEN TO THE SHOW

A generation has now passed since the September 11, 2001 terrorist attacks.

The Official 9/11 Commission, overseen by co-chairs Thomas Kean and Lee Hamilton published its final report in August of 2004. Yet in the 15 years since that report was released, much of the public remains unconvinced that this body truly got to the bottom of the attack which directly led to the deaths of thousands of people in the United States, including first responders.

This act of terrorism, and the official explanation that it was a sneak attack by Islamic militants, was used to justify a ‘Global War on Terrorism’ which has so far come with a price tag of almost six trillion U.S. dollars, and human cost of roughly half a million souls. [2]

Many independent researchers have arrived at the conclusion that the official explanation is false, and that a new investigation is in order. One of these groups of researchers is the Architects and Engineers for 9/11 Truth. On their website is a petition with the names of over 3,000 architects and engineers along with over 23,000 members of the general public who doubt the veracity of the official account and are demanding a new investigation.

On September 11, 2017, 9/11 family members together with Architects and Engineers would announce draft legislation to re-investigate the destruction of the three World Trade Center towers.

In April 2018, legal professionals with the Lawyers’ Comittee for 9/11 Inquiry initiated a process that will see a Federal Grand Jury review the evidence not considered by the 9/11 Commission.

In July of 2019, Franklin Square and Munson Fire District just outside of Queens in New York City became the first legislative body in the United States to officially support a new investigation into the events of 9/11, following a unanimous vote by all five of its commissioners.

And on September 3, 2019, a brand new draft study was released to the public which conducted a detailed reevaluation of what caused the third World Trade Center tower, Building 7, to collapse at 5:20 in the afternoon despite never having been struck by an airplane. The report found that, contrary to the finding by the National Institute of Standards and Technology (NIST), fires in the structure could not have been the cause of the collapse.

On this week’s Global Research News Hour radio program, at the end of the week marking the 18th anniversary of the World Trade Center attacks, we update listeners on efforts to not only expose the truth of what happened, but also to achieve justice for the victims at home and abroad.

Does 9/11 Still Matter? Conversations with Richard Gage and Michel Chossudovsky

In the first half hour of the program, former guest Richard Gage, AIA of Architects and Engineers for 9/11 Truth is joined by Barbara Honegger of the Lawyers Committee for 9/11 Inquiry to provide some background on the Grand Jury petition, the lobbying of members of Congress, the fire fighters call for a new investigation, and ongoing lobbying of legislators.

In our second half hour we will hear part of the presentation from fire commissioner and 9/11 first responder Christopher Gioia as heard during a September 11, 2019 news conference in Washington D.C. (See video below.)

Josh Sigurdson talks with Richard Gage AIA of Architects & Engineers For 9/11 Truth as well as Barbara Honegger who famously exposed the truth behind the Iran Contra scandal in the 1980s as a member of the Reagan White House with her book 'October Surprise' and now works with the Lawyers Committee For 9/11 Inquiry.

Some massive news has come out in recent days regarding a petition originally filed in April of 2018 asking for a new investigation into 9/11. Just a few days ago, LCfor9/11 got a letter back from a US attorney agreeing to comply with a Federal law requiring submission to a special grand jury of report by Lawyers' committee and 9/11 victim family members of "yet to be prosecuted 9/11 crimes."

This is the biggest news to come out regarding 9/11 since the 28 pages and by far has more impact.

Barbara explains as a private citizen her thoughts on this incredible breakthrough and why it could change everything. She expects it to possibly complete in about a year and a half but this stepping stone can expose everything we've long wondered about 9/11 and the obvious coverups. Even if one is not sure what exactly happened on 9/11 as we are left to a lot of assumption, it is well understood in this day and age that at the very least, the official investigation was a whitewash. Richard Gage says this recent news is music to his ear and is something that AE911 has been pushing for for many years.

Both Richard and Barbara explain why this is so important, what people need to understand about 9/11, the strange events of the day and why everyone should question what happened. Let's not forget what that fateful day has lead to and continues to lead to in the security field and overseas.

Little did we know at the time, 9/11 was not a normal day of blue sky aviation. On the contrary, it was one of the busiest days in the history of American aviation, a dense forest of live fly exercises, drills, simulations, fake radar injects and utter confusion. And that was before the attacks even began. This is the story of 9/11 that you didn't watch unfold on your TV that fateful day in 2001. This is the story of the 9/11 War Games.

This little video proves beyond any shadow of a doubt that our public servants are nothing but a bunch of lying SOBs. This vid captures the massive lies told to get us into the bogus war with Iraq, which lead to the never end fake war on terror we are still dealing with today.  There have been so many lies, such a stream of one lie blending into another lie, that most of the American people can't figure out what the truth is anymore. 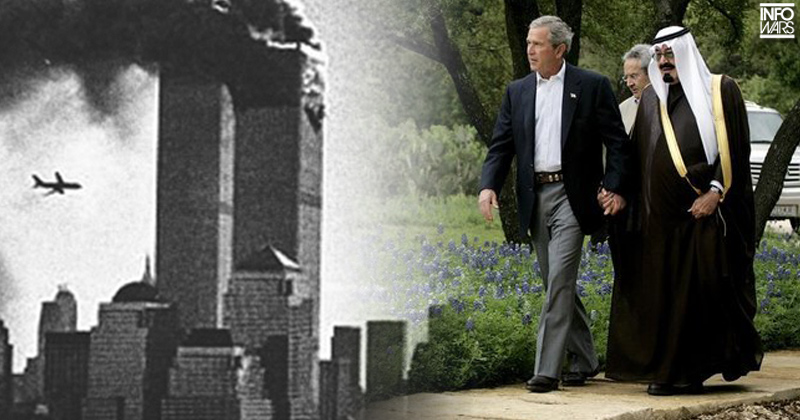 President Trump is prepared to go beyond exposing Special Counsel Robert Mueller’s 9/11-Saudi cover-up by releasing new information on how the Bushes and Clintons were also involved, according to high-level government sources.

In short, Mueller’s role in covering up Saudi Arabia’s ties to 9/11 is just the tip of the iceberg; Trump is set to expose even more collusion by the deep state, according to officials who spoke to Infowars.

Trump has previously criticized former President George W. Bush for his actions prior to and during the 9/11 attack.

“I lost hundreds of friends, the World Trade Center went down during the reign of George Bush,” then-candidate Trump said during a debate in 2016. “He kept us safe? That is not safe.”

Months later, the House Intelligence Committee released a redacted version of the once-classified 28 pages from the Congressional Joint Inquiry into the 9/11 Commission report.

While redacted in places, the 28 pages did reveal some bombshell information.

“While in the United States, some of the September 11 hijackers were in contact with, and received support or assistance from, individuals who may be connected to the Saudi Government,” the report reads. “There is information, primarily from FBI sources, that at least two of those individuals were alleged by some to be Saudi intelligence officers.”

Trump is threatening to release the information that was possibly redacted or perhaps even new documents completely unknown to the public.

Interestingly, the purge within Saudi Arabia during Trump’s first year in office removed many Saudi allies of the Bush and Clinton families.

The purge against “corrupt royalty” by King Salman targeted 10 princes and 38 senior cabinet members, and interestingly Saudi Arabia reportedly accounted for 20% of Clinton’s campaign funding in 2016.

Additionally, an attorney for 9/11 victim’s families, Jim Kreindler, said the rush to war with Iraq necessitated the cover-up of the Saudi connection to 9/11, and Mueller was instrumental in making this happen.

This explains why the Bush administration allowed prominent Saudis, including members of the Bin Laden family, to fly out of the country right after the 9/11 attacks, an evacuation that the 9/11 Commission report later conveniently claimed never happened.

This video is based on combined segments from an interview conducted by George Noory on Coast to Coast AM with 9/11 researcher author and now retired Flight Attendant Rebekah Roth. This version of the interview is shortened and edited.

Everything you ever wanted to know about the 9/11 conspiracy theory in under 5 minutes.