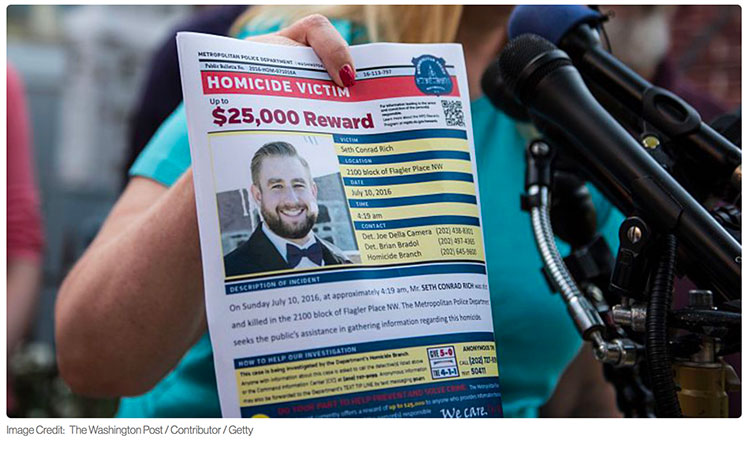 The deposition, published by Texas attorney Ty Clevenger, lends credibility to a 2017 audio recording where Hersh made the same allegation.

However, for the last three years, Hersh has been trying to rescind the original remark.

In an August 2020 cover-up article, Rolling Stone said Hersh’s 2017 comments were “all just musings” that “turned out not to be true.”

He also said that just because a source told him the information, “doesn’t make it true.”

One month before the Rolling Stone article, in an official deposition from July of 2020, Hersh confirmed his 2017 remarks were in-fact true.

Hersch was asked, “It’s true that you had a trusted source whom you had known for 31 years who communicated information to you about the FBI examining Seth Rich’s computer, finding emails from Seth Rich to Wikileaks, and requesting payment in exchange. That is a true statement, is it not?”

Hersh’s response was, “My answer is it’s absolutely true. I had a source who communicated secondhand information to me about the issues you raise.” 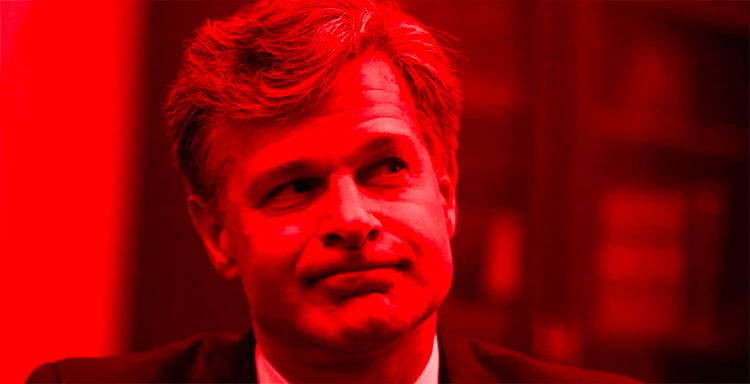 FBI Dir. Wray Profited from Hunter Biden’s Illegal China-Russia Kickback Deal, per Records & High-Placed Feds. Is This Why the FBI Has Covered Up Hunter’s Laptop? Guess Who Else Cashed In on Hunter’s Deal? AG William Barr. You couldn’t make this up if you tried.

If the audio won't play please report the problem by clicking here.

Editor's Note: This is what these bastards at the Intel agencies and FBI did and still do to manufacture crap to justify their criminal persecution of anyone they wish, including the President of the United States. They totally redacted benign documents to make it appear as if they are suspicious when they knew damned well there was NOTHING nefarious about them.

National Security Adviser Robert O'Brien made good Friday on President Trump's transparency pledge in the Russia collusion case, releasing in its entirety a previously heavily redacted document from the Robert Mueller probe showing why Russian diplomats met with Trump in May 2017.

The memo, which was originally released Wednesday with only three words visible, shows National Security Council official Eric Ciaramella wrote on May 10, 2017 that Trump chose to meet with Russian Foreign Minister Sergey Lavrov during a visit to Washington based on a request eight days earlier during a phone call with Russian president Vladimir Putin.

You can see the unredacted version here: 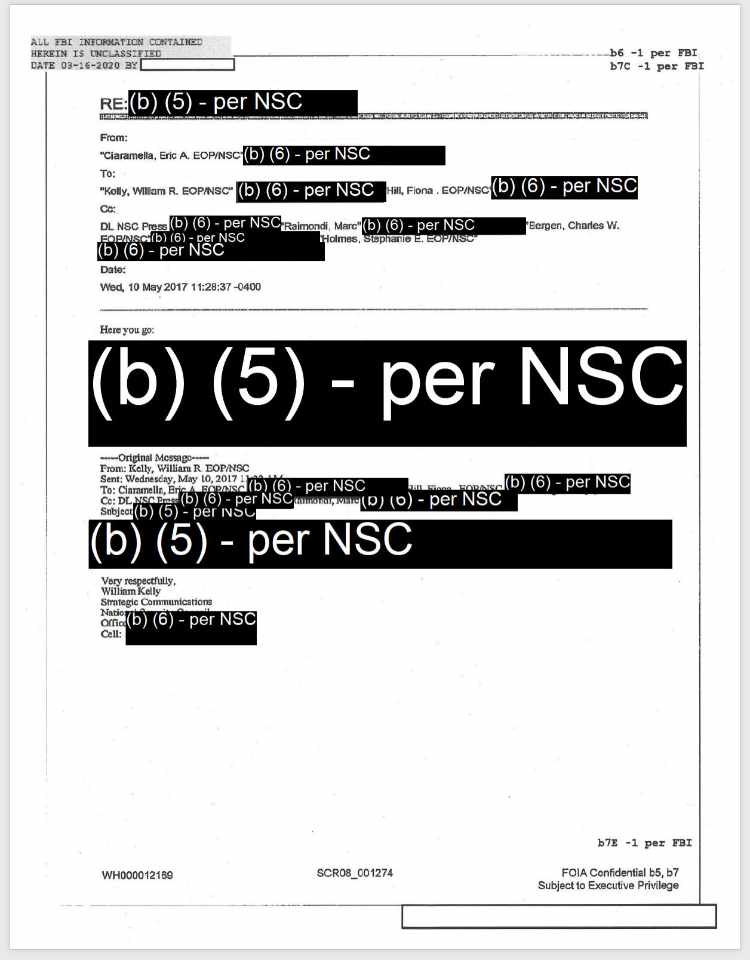 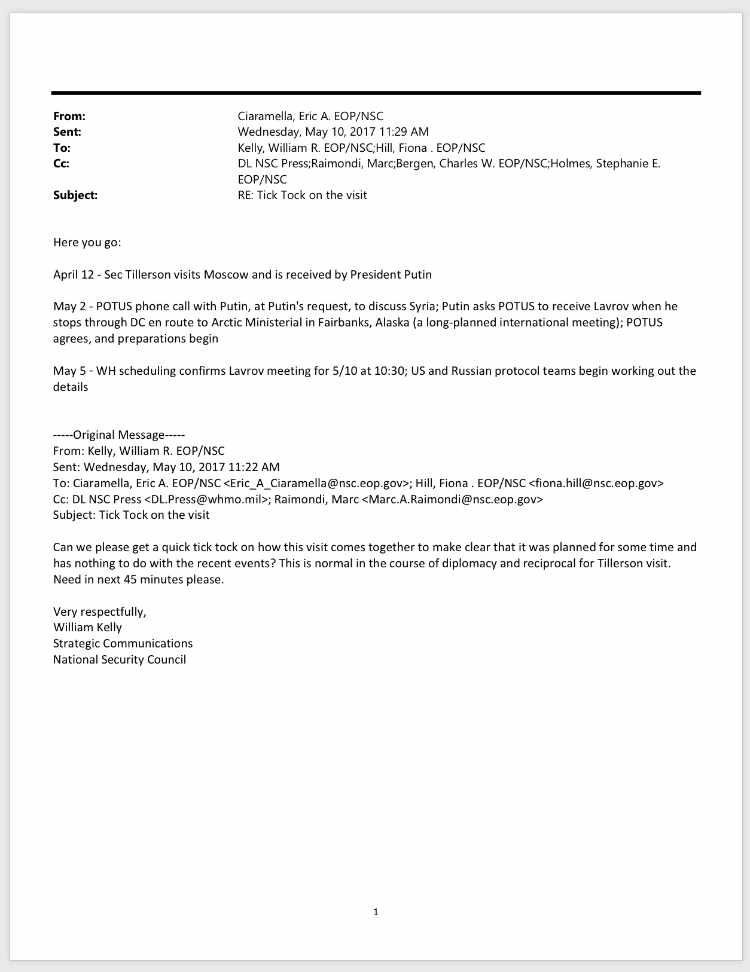 You can see the originally redacted memo here.

The memo was first flagged in a footnote of Mueller's final investigative report on the Russia collusion probe in spring 2019, in part because the Lavrov meeting became the subject of a news media leak that claimed Trump called James Comey a "nut job" during the gathering and told the Russian foreign minister the FBI director had just been fired. 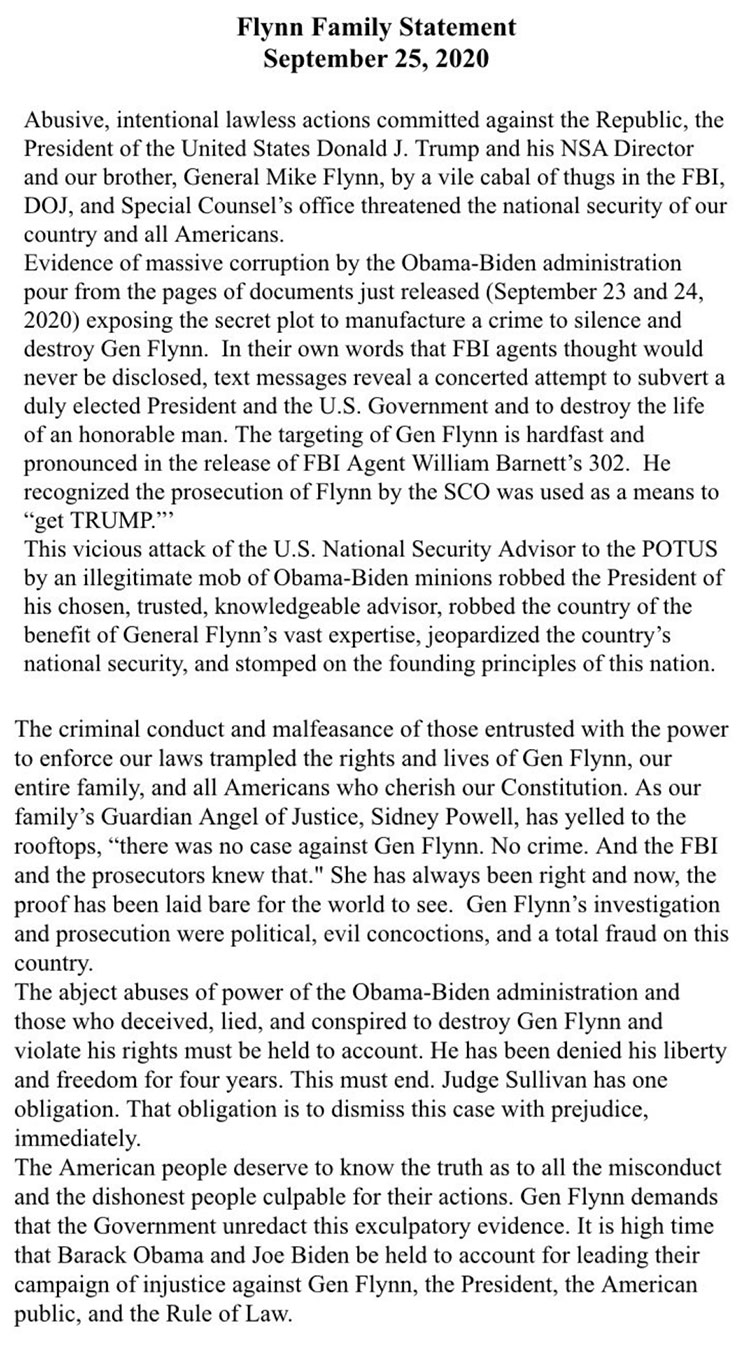 As the true story behind the Michael Flynn emerges, it appears that the FBI falsified reports, withheld evidence and bullied a 33 year military veteran and his family in order to protect the deep state. 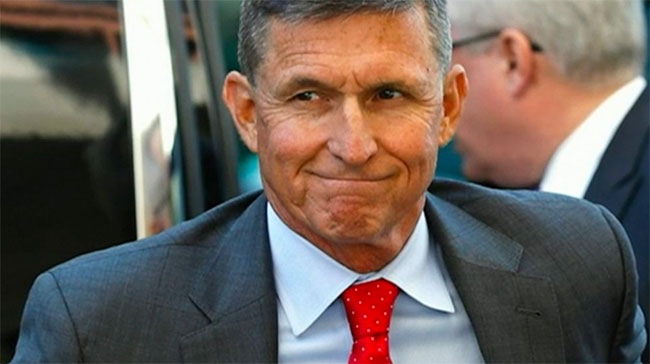 An appeals court ordered the judge presiding over the case against retired Lt. Gen. Michael Flynn to grant the Justice Department's motion to dismiss the criminal charges against the former Trump national security adviser.

"ORDERED that Flynn’s petition for a writ of mandamus be granted in part; the District Court is directed to grant the government’s Rule 48(a) motion to dismiss; and the District Court’s order appointing an amicus is hereby vacated as moot, in accordance with the opinion of the court filed herein this date," the U.S. Court of Appeals for the District of Columbia ruled Wednesday.

DOJ spokeswoman Kerri Kupec reacted to the ruling with a tweet. "WIN in General Flynn’s case. DC Circuit has ruled 2-1, instructing Judge Sullivan to grant DOJ’s motion to dismiss the case," she said.

This is not necessarily the end of the Flynn legal fight. Sullivan could request a rehearing “en banc” before the full appeals court, and it is possible that one of the other judges on the appeals court could request such a hearing “sua sponte” even if Sullivan doesn’t formally request it himself.

The Russia collusion investigation led by then-Special Counsel Robert Mueller was artificially prolonged in the hope that President Donald Trump would move to terminate it and thus be accused of obstruction of justice, according to former acting Attorney General Matthew Whitaker. Whitaker, who led the Department of Justice (DOJ) between Nov. 7, 2018, and Feb. 14, 2019, said that, in his opinion, the Mueller team acted inappropriately to create an “obstruction of justice trap” for Trump and his officials. Former FBI Director Mueller was appointed by then-Deputy Attorney General Rod Rosenstein in May 2017 to take over an FBI counterintelligence investigation to determine whether the 2016 Trump campaign colluded with Russia to sway the election.

By March 2019, Mueller had wrapped it up, saying the probe was unable to establish that any such collusion took place. Mueller, however, already knew this in 2018, Whitaker told Jan Jekielek, host of The Epoch Times’ “American Thought Leaders” series. Soon after taking command at the DOJ, Whitaker was briefed “on the contours and what was the Mueller investigation,” he said. “There was no evidence of any criminal conspiracy or connection or collusion, whatever you want to call it, between the Trump campaign, members of the Trump campaign—including Donald Trump—and the Russian government. So, therefore, the primary and sole purpose of that investigation had essentially failed to generate any evidence, and it was clear that that had been known for some time.” Keeping such an investigation open isn’t the “regular order at the Department of Justice,” according to Whitaker. He offered a theory as to why it happened. Original article: https://www.theepochtimes.com/ex-acti…

"They knew they had nothing, but using their official power they created and perpetuated the facade of an investigation"

John Dowd, one of the lead lawyers who represented President Trump during Robert Mueller’s investigation into Russian collusion, said Tuesday that the special counsel engineered a perjury trap for Trump in the exact same way that James Comey’s FBI invented a trap for former National Security Adviser Michael Flynn.

“Mueller’s scheme was the same one captured in the (newly released) FBI set-up notes pertaining to Flynn. They knew they had nothing, but using their official power they created and perpetuated the facade of an investigation,” said Dowd.

In an extensive interview on Tuesday, Dowd explained to me how his commitment of cooperation and transparency in dealing with Mueller was eventually turned against the president, as the special counsel “misled” Trump’s legal team in order to manufacture a crime where none existed.

They knew they had nothing, but using their official power they created and perpetuated the facade of an investigation

According to Dowd, Mueller learned early in his investigation that there was no evidence of Trump-Russia collusion to influence the 2016 presidential election. He admitted it during a meeting with the president’s lawyers on March 5, 2018. So, Mueller shifted to a legally contorted interpretation of obstruction of justice in order to keep his investigation afloat.

On Tuesday, Dowd elaborated on how the special counsel deceived the Trump team:

“As I look back, we had the most perfect trusting relationship with Mueller based on his word and handshake, which held throughout. No paper. Word was solid. They received everything they asked for without a hitch or page missing, including the most intimate notes of conversations with and by POTUS (President of the United States). Every witness they requested testified truthfully. No lying. No grand jury testimony. Mueller affirmed all of this in our March 5 (2018) meeting. How could there be a whisper of obstruction under these circumstances?”

Despite no evidence of an underlying crime, Mueller insisted that the president be interviewed by the special counsel. Dowd knew it was a trap. Mueller had done it to Flynn and others. He was clearly angling for obstruction of justice and hoping to ensnare the president in the equivalent of a perjury trap if he consented to be interviewed.

But obstructing what? Mueller readily acknowledged that there was no underlying crime. Moreover, Trump had encouraged every witness connected to his campaign and the White House to testify. He voluntarily produced more than a million pages of documents. The special counsel’s investigation had proceeded unimpeded.

As Mueller persisted, Trump’s lawyer realized that he had been conned all along. On Tuesday, Dowd was unsparing in his scorn for Mueller and his unscrupulous tactics:

“That is when I knew he had lied to me in our original meeting (June 16, 2017) and every meeting thereafter. Robert Mueller —‘D.C.’s great man’ — completely and deliberately misled us in order to set up a perjury/false statement trap for POTUS. It was a monstrous lie and scheme to defraud.”

Dowd shared with me numerous documents and letters supporting his accusations against Mueller. They paint a vivid picture of a special counsel determined to damage the president with an investigation bereft of any credible evidence.