This is a presentation by Robert James Hamilton detailing Blackrock's secret weapon that has made it the most powerful company in the world . . . Aladdin. If you're ever wondered how Artificial Intelligence could impact our lives, here's the answer. Aladdin is the brainchild of Larry Fink, and it already controls more assets than the GDP than the US. It's growing by $1 trillion to $2 trillion new assets in its control each year.
---
Roger James Hamilton is a futurist, social entrepreneur and New York Times Bestselling Author of the Millionaire Master Plan. He is the founder of Entrepreneurs Institute and the creator of the Wealth Dynamics, Talent Dynamics & Genius Test Profiling Systems, used by over 1,000,000 entrepreneurs to follow their flow. Check out his YouTube channel here: https://www.youtube.com/c/RogerJamesHamilton1

What if you could give life to your late grandmother’s photos? Now you can, thanks to AI and deepfake technologies.

If the video won't play please report the problem by clicking here.
Related Article
This App Will Soon Unleash Deepfake Videos That Can Frame Anyone 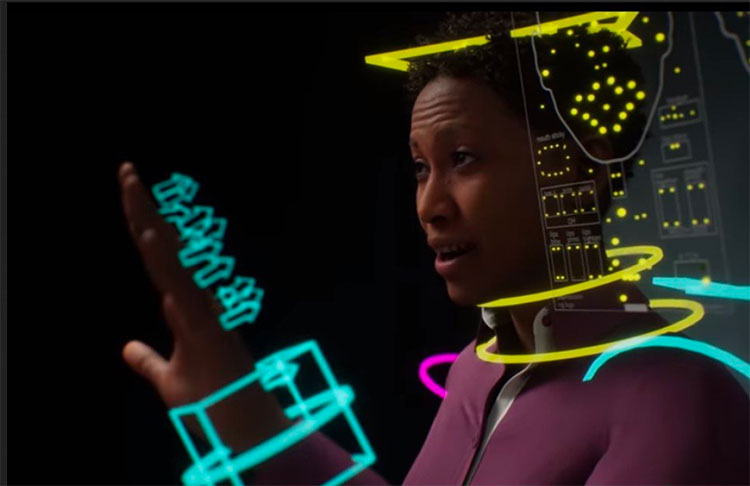 Epic Games just released the first demos for MetaHuman Creator, bringing us one step closer to living in a simulation. The cloud-based app has an intuitive interface, allowing minimally competent users to create ultra-realistic digital humans “in less than an hour, without compromising on quality.”

Just as Pro Tools gave burnouts the power to make techno, or PhotoShop let perverts alter celebrity images, soon anyone with a decent laptop will be able to generate a deepfake. It’s gonna be hilarious—at first.

MetaHuman Creator was developed for Unreal Engine, a top platform for game design, film effects, and live event production. The package allows users to build detailed humanoids for 2D videos or immersive virtual environments. Best of all, it’s so easy, any amateur can do it. If you’re a talentless game animator or a dating app con artist, now is your time to shine.

MetaHuman’s first generation of digital androids is about as creepy as you’d imagine, if only because their presentation is so natural. Their facial movements mimic genuine emotions. Watching the demos, you’ll notice tiny pores, subtle wrinkles, hints of tooth crud, and even peach fuzz catching the backlight. The facial palette offers a wide range of skin tones, hairstyles, and bone structures.

Joshua Browder is trying to cut red tape and upend the legal services industry with DoNotPay, a company that's running a "denial of service attack on the legal system."

Journalist Ashlee Vance travels to Montreal, Canada to meet the founders of Lyrebird, a startup that is using AI to clone human voices with frightening precision.

Ocado's new warehouse has thousands of robots zooming around a grid system to pack groceries. The thousands of robots can process 65,000 orders every week. They communicate on a 4G network to avoid bumping into each other. Is this the future of retail? 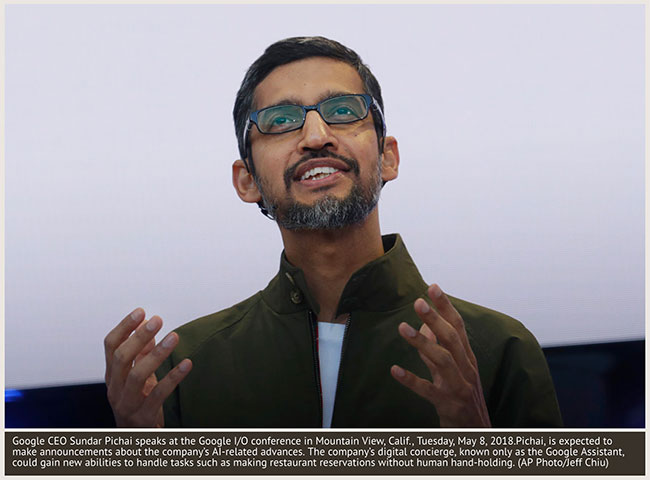 At the I/O developers conference, Pichai introduced Google Duplex, which allows the Assistant to speak with human-like cadence and includes artificial intelligence that is able to comprehend context and unclear answers.

Pichai demonstrated Duplex’s ability by having Assistant make reservations with a restaurant and a hair salon in two recorded phone calls. The receivers of the calls seemed to have no idea they were speaking to an AI voice. In the phone calls, Google Assistant said “ums” and “uhs” to make itself sound more human. In its phone call with the restaurant, where it was too busy to book a reservation, Google Assistant was able to naturally respond to questions and remarks made in a thick accent.

MAX TEGMARK: Hollywood movies make people worry about the wrong things in terms of super intelligence. What we should really worry about is not malice but competence, where we have machines that are smarter than us whose goals just aren’t aligned with ours. For example, I don’t hate ants, I don’t go out of my way to stomp an ant if I see one on the sidewalk, but if I’m in charge of this hydroelectric dam construction and just as I’m going to flood this valley with water I see an ant hill there, tough luck for the ants. Their goals weren’t aligned with mine and because I’m smarter it’s going to be my goals, not the ant’s goals, that get fulfilled. We never want to put humanity in the role of those ants.

Nadia is a one-of-a-kind chatbot. Her mission is to help people with disabilities benefit from government insurance schemes.

The AI genius, who has built out his virtual BabyX from a laughing, crying head, sees a symbiotic relationship between humans and machines. 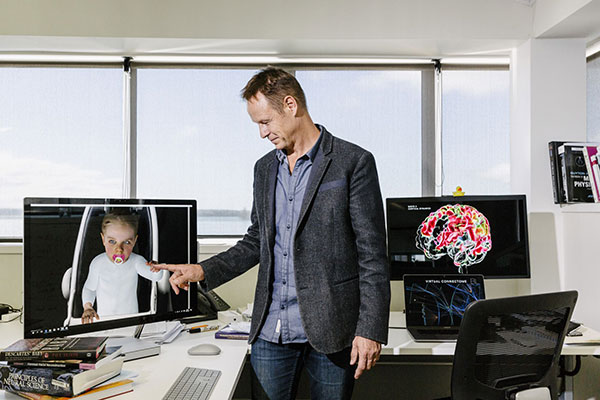 People get up to weird things in New Zealand. At the University of Auckland, if you want to run hours upon hours of experiments on a baby trapped in a high chair, that’s cool. You can even have a conversation with her surprisingly chatty disembodied head.

BabyX, the virtual creation of Mark Sagar and his researchers, looks impossibly real. The child, a 3D digital rendering based on images of Sagar’s daughter at 18 months, has rosy cheeks, warm eyes, a full head of blond hair, and a soft, sweet voice. When I visited the computer scientist’s lab last year, BabyX was stuck inside a computer but could still see me sitting in front of the screen with her “father.” To get her attention, we’d call out, “Hi, baby. Look at me, baby,” and wave our hands. When her gaze locked onto our faces, we’d hold up a book filled with words (such as “apple” or “ball”) and pictures (sheep, clocks), then ask BabyX to read the words and identify the objects. When she got an answer right, we praised her, and she smiled with confidence. When she got one wrong, chiding her would turn her teary and sullen.

If it sounds odd to encounter a virtual child that can read words from a book, it’s much more disorienting to feel a sense of fatherly pride after she nails a bunch in a row and lights up with what appears to be authentic joy. BabyX and I seemed to be having a moment, learning from each other while trading expressions and subtle cues so familiar to the human experience. That’s the feeling Sagar is after with his research and his new company Soul Machines Ltd.

The term “artificial intelligence” has become a catchall for impersonal, mysterious calculations performed behind closed doors. Huge farms of computers crank away at piles of data, using statistics to analyze our internet history, driving habits, and speech to produce targeted ads, better maps, and Apple Inc.’s Siri. This sense of AI as an amorphous shadow falling over more and more of our lives has left people from Stephen Hawking to Elon Musk skeptical of the technology, which tends to feel unnatural, somehow less than real.

Sagar is a leading figure in the camp trying to humanize AI, which he says has the potential to yield a more symbiotic relationship between humans and machines. While he wasn’t the first to this idea, his approach is unique, a synthesis of his early years as a computer scientist and later ones in the world of Hollywood special effects. The face, he’s concluded, is the key to barreling through the uncanny valley and making virtual beings feel truly lifelike. Soul Machines’ creations are unparalleled in this respect, able to wince and grin with musculature and features that move shockingly like ours. They have human voices, too, and are already contracted for use as online helpers for companies ranging from insurance providers to airlines. Soul Machines wants to produce the first wave of likable, believable virtual assistants that work as customer service agents and breathe life into hunks of plastic such as Amazon.com’s Echo and Google Inc.’s Home. 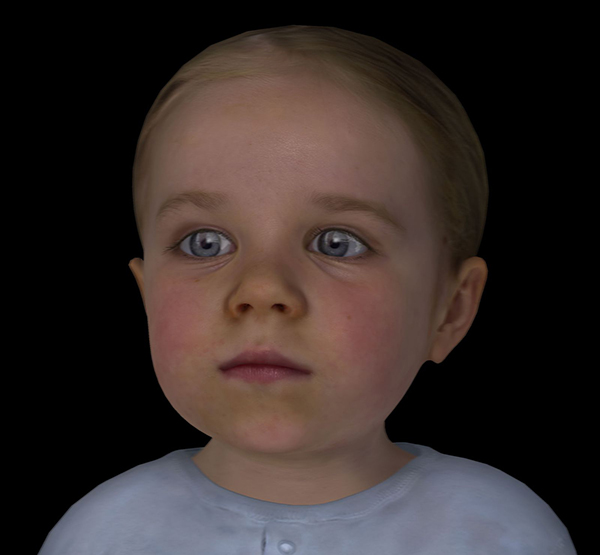 Companies with similar aspirations throughout Japan and the U.S. have produced a wide array of virtual avatars, assistants, and holograms. Many of the people behind these projects say AI systems and robots can achieve their full potential only if they become more humanlike. They need to have memories, the thinking goes, plus something resembling emotions, to propel them to seek out their own experiences.

Sagar’s approach on this front may be his most radical contribution to the field. Behind the exquisite faces he builds are unprecedented biological models and simulations. When BabyX smiles, it’s because her simulated brain has responded to stimuli by releasing a cocktail of virtual dopamine, endorphins, and serotonin into her system. This is part of Sagar’s larger quest, using AI to reverse-engineer how humans work. He wants to get to the roots of emotion, desire, and thought and impart the lessons to computers and robots, making them more like us.

“Since my 20s, I’ve had these thoughts of can a computer become intelligent, can it have consciousness, burning in my mind,” he says. “We want to build a system that not only learns for itself but that is motivated to learn and motivated to interact with the world. And so I set out with this crazy goal of trying to build a computational model of human consciousness.”

Here’s what should really freak you out: He’s getting there a lot quicker than anybody would have thought. Since last year, BabyX has, among other things, sprouted a body and learned to play the piano. They grow up so fast.