What’s behind the devastating power outages in Texas? Some say the problem was freezing natural gas pipelines; some say it’s because wind turbines froze or mismanagement by the Electric Reliability Council of Texas (ERCOT). To find out what’s going on in Texas, I sat down with Jason Isaac, who predicted a power crisis in Texas months ago. He’s the director of Life:Powered, a national initiative of the Texas Public Policy Foundation seeking to “raise America’s energy IQ.” 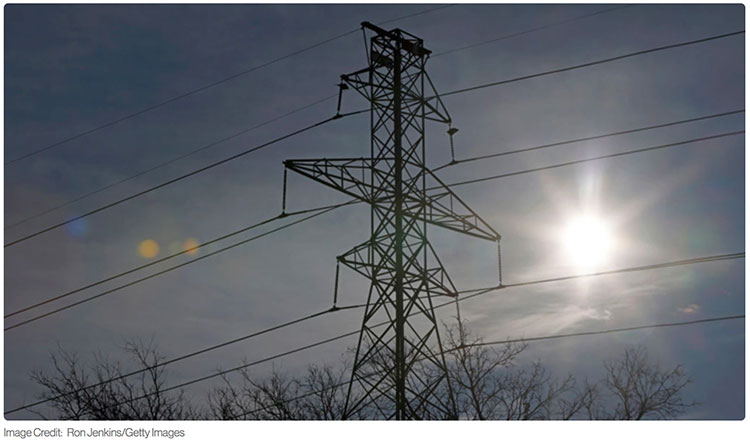 A week before, Texas begged for help and asked for DOE to lift federal regulations barring state's energy output.

An Emergency Order from the Biden administration’s Department of Energy shows Texas energy grid operator ERCOT was instructed to stay within green energy standards by purchasing energy from outside the state at a higher cost, throttling power output throughout the state ahead of a catastrophic polar vortex.

The order shows Acting Energy Secretary David Huizenga did not waive environmental restrictions to allow for maximum energy output, instead ordering ERCOT to utilize all resources in order to stay within acceptable emissions standards – including purchasing energy from outside the state.

In the light of recent reports pertaining to “unimaginable” levels of radiation emanating from Fukushima, we are reposting this I-Book on the Fukushima tragedy, which has been the object of media coverup and distortion. In the words of Dr. Helen Caldicott, “one millionth of a gram of plutonium, if inhaled can cause cancer”.

Originally published in  January 2012, this study by Michel Chossudovsky confirms what is now unfolding, a Worldwide process of nuclear radiation.

Note to Readers: Remember to bookmark this page for future reference.

[scroll down for I-BOOK Table of Contents]

Originally published in January 2012. The introduction of the I-Book is contained as a chapter in Michel Chossudovsky’s 2015 bestseller:  The Globalization of War, America’s Long War against Humanity, Global Research, Montreal 2015

Fukushima: A Nuclear War without a War

Global Research’s Online Interactive I-Book Reader brings together, in the form of chapters, a collection of Global Research feature articles and videos, including debate and analysis, on a broad theme or subject matter.

In this Interactive Online I-Book we bring to the attention of our readers an important collection of articles, reports and video material on the Fukushima nuclear catastrophe and its impacts (scroll down for the Table of Contents).

The World is at a critical crossroads. The Fukushima disaster in Japan has brought to the forefront the dangers of Worldwide nuclear radiation.

The crisis in Japan has been described as “a nuclear war without a war”. In the words of renowned novelist Haruki Murakami:

Nuclear radiation –which threatens life on planet earth– is not front page news in comparison to the most insignificant issues of public concern, including the local level crime scene or the tabloid gossip reports on Hollywood celebrities.

While the long-term repercussions of the Fukushima Daiichi nuclear disaster are yet to be fully assessed, they are far more serious than those pertaining to the 1986 Chernobyl disaster in the Ukraine, which resulted in almost one million deaths (New Book Concludes – Chernobyl death toll: 985,000, mostly from cancer Global Research, September 10, 2010, See also Matthew Penney and Mark Selden  The Severity of the Fukushima Daiichi Nuclear Disaster: Comparing Chernobyl and Fukushima, Global Research, May 25, 2011)

Moreover, while all eyes were riveted on the Fukushima Daiichi plant, news coverage both in Japan and internationally failed to fully acknowledge the impacts of a second catastrophe at TEPCO’s (Tokyo Electric Power Co  Inc) Fukushima Daini nuclear power plant.

The shaky political consensus both in Japan, the U.S. and Western Europe is that the crisis at Fukushima has been contained.

The realties, however, are otherwise. Fukushima 3 was leaking unconfirmed amounts of plutonium. According to Dr. Helen Caldicott, “one millionth of a gram of plutonium, if inhaled can cause cancer”.

An opinion poll in May 2011 confirmed that more than 80 per cent of the Japanese population do not believe the government’s information regarding the nuclear crisis. (quoted in Sherwood Ross, Fukushima: Japan’s Second Nuclear Disaster, Global Research, November 10, 2011)

The Impacts in Japan

The Japanese government has been obliged to acknowledge that “the severity rating of its nuclear crisis … matches that of the 1986 Chernobyl disaster”. In a bitter irony, however, this tacit admission by the Japanese authorities has proven to been part of  the cover-up of a significantly larger catastrophe, resulting in a process of global nuclear radiation and contamination:

“While Chernobyl was an enormous unprecedented disaster, it only occurred at one reactor and rapidly melted down. Once cooled, it was able to be covered with a concrete sarcophagus that was constructed with 100,000 workers. There are a staggering 4400 tons of nuclear fuel rods at Fukushima, which greatly dwarfs the total size of radiation sources at Chernobyl.” ( Extremely High Radiation Levels in Japan: University Researchers Challenge Official Data, Global Research, April 11, 2011) Fukushima in the wake of the Tsunami, March 2011

The dumping of highly radioactive water into the Pacific Ocean constitutes a potential trigger to a process of global radioactive contamination. Radioactive elements have not only been detected in the food chain in Japan, radioactive rain water has been recorded in California:

“Hazardous radioactive elements being released in the sea and air around Fukushima accumulate at each step of various food chains (for example, into algae, crustaceans, small fish, bigger fish, then humans; or soil, grass, cow’s meat and milk, then humans). Entering the body, these elements – called internal emitters – migrate to specific organs such as the thyroid, liver, bone, and brain, continuously irradiating small volumes of cells with high doses of alpha, beta and/or gamma radiation, and over many years often induce cancer”. (Helen Caldicott, Fukushima: Nuclear Apologists Play Shoot the Messenger on Radiation, The Age,  April 26, 2011)

While the spread of radiation to the West Coast of North America was casually acknowledged, the early press reports (AP and Reuters) “quoting diplomatic sources” stated that only “tiny amounts of radioactive particles have arrived in California but do not pose a threat to human health.”

“According to the news agencies, the unnamed sources have access to data from a network of measuring stations run by the United Nations’ Comprehensive Test Ban Treaty Organization. …

… Greg Jaczko, chair of the U.S. Nuclear Regulatory Commission, told White House reporters on Thursday (March 17) that his experts “don’t see any concern from radiation levels that could be harmful here in the United States or any of the U.S. territories”. The spread of radiation. March 2011

One of the primary reasons government is set up is to provide protection against those with the most wealth and power from exploiting us and everything else.

This amazing news segment reveals an amazing (accidental) invention that instantly releases hydrogen from ordinary salt water with nothing more than harmless frequency waves.  I have seen innovation after innovation over the years that never see the light of day while Big Oil and gas continue their stranglehold on what energy sources are available to us.

Unfortunately those with the most wealth and power control our government ensuring their monopolies remain intact.

Into Eternity is a documentary about a deep geological repository for nuclear waste. The concept of long-term underground storage for radioactive waste has been explored since the 1950s. The inner part of the Russian doll-like storage canisters is to be composed of copper. Hence in the case of Onkalo it is tightly linked to experiments on copper corrosion in running groundwater flow. Application for the implementation of spent nuclear fuel repository was submitted by Posiva in 2001. The excavation itself started in 2004. With a total of four operable reactors providing 25% of the country's energy supply, Finland ranks 16th in the world nuclear power reactors country list topped by the United States (104 reactors) and France (58 reactors).

This film explores the question of preparing the site so that it is not disturbed for 100,000 years, even though no structure in human history has stayed standing for such a long period.

"Every day, the world over, large amounts of high-level radioactive waste created by nuclear power plants are placed in interim storage, which is vulnerable to natural disasters, man-made disasters, and societal changes. In Finland, the world’s first permanent repository is being hewn out of solid rock – a huge system of underground tunnels – that must last the entire period the waste remains hazardous: 100,000 years."

Once the repository waste has been deposited and is full, the facility is to be sealed off and never opened again. Or so we hope, but can we ensure that? And how is it possible to warn our descendants of the deadly waste we left behind? How do we prevent them from thinking they have found the Giza pyramids of our time, mystical burial grounds, hidden treasures? Which languages and signs will they understand? And if they understand, will they respect our instructions?

Experts above ground strive to find solutions to this crucially important radioactive waste issue to secure mankind and all species on planet Earth now and in the near and very distant future."

Col Fletcher Prouty explains how oil was falsely classified a "fossil fuel" in 1892 and how that deception was advanced further in the 70's by Kissinger and Rockefeller.