Six weeks ago, Revolver News published a blockbuster investigative report on Ray Epps — a man who, more than any other individual, appears to be the key unlocking the question of active federal involvement in the so-called “Capitol Siege” of January 6th.

Out of all of the thousands of January 6’s protesters, and the thousands of hours of publicly available footage from that fateful day, Ray Epps has turned out to be perhaps the only person nailed dead to rights confessing on camera to plotting a pre-planned attack on the Capitol. On both January 5 and January 6, Epps announced multiple times, at multiple locations, his upcoming plot to breach the US Capitol. He then spent hours attempting to recruit hundreds of others to join him. On top of it all, Epps was seen leading key people and managing key aspects of the initial breach of the Capitol grounds himself.

It would be one thing if Epps’s repeated calls on January 5 to “go into the Capitol” had simply amounted to bluster. But Epps followed through on his stated mission to shepherd others inside. In clips 4-6 of the above compilation, we see Epps actively orchestrate elements of the very first breach of the Capitol barricades at 12:50 p.m, while Trump still had 20 minutes left in his rally speech. 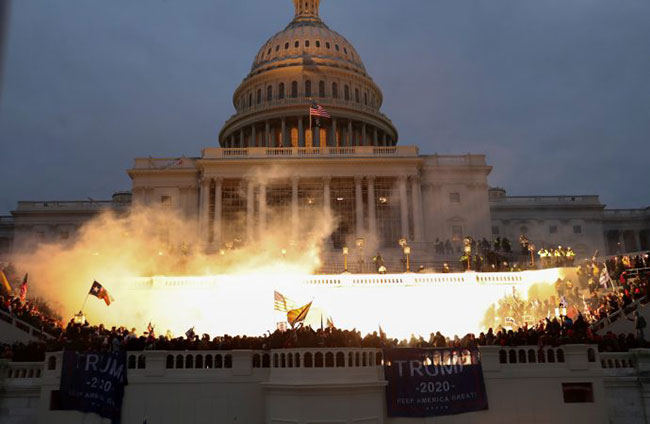 The Washington Post has reported that the outgoing Capitol Police Chief, Steve Sund, believes his efforts to secure the premises were undermined by a lack of concern from House and Senate security officials who answer directly to Speaker Nancy Pelosi and Senate leader Mitch McConnell. The National Pulse can also report the Washington Post’s timeline proves it was impossible for Trump speech attendees to have made it to the Capitol in time for the breach.

In addition to the fact that Trump openly called for the “cheering on” of Congressman, and “peaceful” protests, the timeline as established from numerous, establishment media reports simply doesn’t stack up.

The admission that House and Senate security leaders failed to provide Capitol Police with resources on the day will raise questions over their role in the day’s events.

Two days before Congress was set to formalize President-elect Joe Biden’s victory, Capitol Police Chief Steven Sund was growing increasingly worried about the size of the pro-Trump crowds expected to stream into Washington in protest.

To be on the safe side, Sund asked House and Senate security officials for permission to request that the D.C. National Guard be placed on standby in case he needed quick backup.

But, Sund said Sunday, they turned him down.

In his first interview since pro-Trump rioters stormed the U.S. Capitol last week, Sund, who has since resigned his post, said his supervisors were reluctant to take formal steps to put the Guard on call even as police intelligence suggested that the crowd President Trump had invited to Washington to protest his defeat probably would be much larger than earlier demonstrations.

House Sergeant at Arms Paul Irving said he wasn’t comfortable with the “optics” of formally declaring an emergency ahead of the demonstration, Sund said. Meanwhile, Senate Sergeant at Arms Michael Stenger suggested that Sund should informally seek out his Guard contacts, asking them to “lean forward” and be on alert in case Capitol Police needed their help.

Irving could not be reached for comment. A cellphone number listed in his name has not accepted messages since Wednesday. Messages left at a residence he owns in Nevada were not immediately returned, and there was no answer Sunday evening at a Watergate apartment listed in his name. A neighbor said he had recently moved out.

Sund recalled a conference call with Pentagon officials and officials from the D.C. government. He said on the call: “I am making an urgent, urgent immediate request for National Guard assistance… I have got to get boots on the ground.”

But the request was apparently denied over optics.

“I don’t like the visual of the National Guard standing a police line with the Capitol in the background,” an Army official replied.

John Falcicchio, chief of staff for D.C. Mayor Muriel E. Bowser admitted: “Literally, this guy is on the phone, I mean, crying out for help. It’s burned in my memories.”