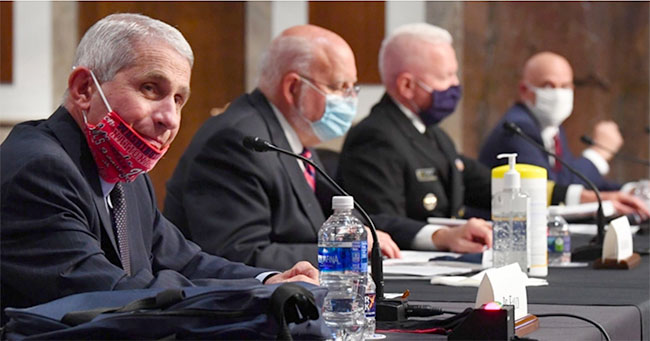 As RedState’s very own Sister Toldjah reported earlier today, the doubts President Trump recently expressed about the wisdom of Dr. Fauci’s advice on COVID-19 have elicited a chorus of smug accusation from the usual suspects that he’s “ignoring the experts.”

Sister Toldjah pointed out that it’s hard to know what their complaint even means given how often Fauci and other media-anointed authorities have done total 180s.

But, even putting aside how their advice seems to change with the political winds, the idea that there’s some scientific consensus in favor of the extreme measures inflicted on us in response to COVID-19 couldn’t be further from the truth.

Though you don’t hear their perspectives on CNN, countless scientists and doctors have tried to warn us not only that COVID-19 isn’t nearly as deadly as we’ve been led to believe; they’re also certain that the real threat to public health we’re facing is from the lockdowns.

For example, though the establishment media has somehow failed to make it widely known, in May over 600 physicians from “all specialties and from all states” signed a public letter to President Trump  describing, not COVID-19, but the lockdowns as a “mass casualty incident.” Since the letter first appeared, the number of doctors signing on has grown into the thousands. Their letter warns:

It is impossible to overstate the short, medium, and long-term harm to people’s health with a continued shutdown. Losing a job is one of life’s most stressful events, and the effect on a persons health is not lessened because it also has happened to 30 million other people. Keeping schools and universities closed is incalculably detrimental for children, teenagers, and young adults for decades to come. The millions of casualties of a continued shutdown will be hiding in plain sight, but they will be called alcoholism, homelessness, suicide, heart attack, stroke, or kidney failure. In youths it will be called financial instability, unemployment, despair, drug addiction, unplanned pregnancies, poverty, and abuse.

600 physicians sent a letter to @realdonaldtrump saying a continued shutdown can lead to a "mass casualty incident" with "negative health consequences." It is time to reopen the nation. @gracemarietweethttps://t.co/fg9Z1LzDDm

Similarly, way back in April, two California emergency room physicians gave a press conference in which they rejected basically every single premise used to justify the lockdowns. Moreover, unlike Fauci, they actually gave detailed explanations of the reasons behind what they were saying rather than demanding blind obedience.

Dr. Dan Erickson and Dr. Artin Massihi presented data from all across the world indicating that Fauci’s response to COVID-19 was completely out of proportion with the threat it posed. They also explained that isolating healthy people is an unheard-of response that violates the basic tenets of both microbiology and immunology. And, like the thousands of doctors who signed that letter to the president, they described in painful detail the disastrous public health consequences working emergency room physicians on the front lines are seeing every day as a result of these lockdowns.

“Child molestation is increasing at a severe rate. We can go over multiple cases of children who’ve been molested due to angry family members who are intoxicated, who are home, who have no paycheck. These things last a lifetime. They aren’t like a seasonal flu, they are going to follow these children and affect them in a negative fashion for their entire lives…  Spousal abuse. We see people coming in here with black eyes and cuts on their face… Alcoholism…anxiety… depression… suicide is spiking… These are things I’m hearing from E.R.s, talking to my doctors, and talking to people across the country to find out what they’re seeing. [They will] effect people for a lifetime, not for a season.

In a sign of how much our elites really care about following the science, Youtube banned the video of Dr. Erickson and Dr. Massihi’s press conference even though it not only featured medical experts fully explaining the science behind their conclusions; it was also posted by a local News channel. Fortunately, the video is still available on other platforms that don’t censor views contradicting the mainstream media’s official narratives. Some local news outlets have also acted like journalists instead of gatekeepers and given the public a chance to hear Dr. Erickson’s take.

But Youtube also censored Laura Ingraham when she interviewed Doctors Erickson and Massihi on Fox News:

Nor are Erickson and Massihi by any means the only physicians who’ve tried to warn us that the lockdowns Fauci’s pushed have nothing to do with “following the science.” Some have even thus far managed to avoid YouTube censorship.

Have you ever actually listened to a doctor who is skeptical of the mainstream narrative about Covid-19? Dr. Jeff Barke is a good example and as far as I can tell, he makes some good points. See what you think.https://t.co/0bQAg9gGyD

As Powerline’s John Hinderaker wrote back in April in a post linking to Drs. Erickson and Massihi’s now censored Youtube video:

It is perhaps unfortunate that bureaucrat doctors and academic doctors have dominated public discussion of the Wuhan virus. What some would call real doctors–those who actually treat patients–have been little heard.

Dissent from Fauscism, however, is by no means restricted to working physicians. Emminent scientists with more theoretical backgrounds have also tried to get the word out that the prescriptions Fauci’s pushed on us, far from “following the science,” are in reality the worst sort of pseudoscientific quack medicine.

John P. A. Ioannidis is a professor of medicine at Stanford University as well as both a professor of epidemiology and population health. When these lockdowns first started kicking in, Dr. Ioannidis published an op-ed titled:

A fiasco in the making? As the coronavirus pandemic takes hold, we are making decisions without reliable data.

And, again in sharp contrast to Fauci, Dr. Ionnidis broke down his reasons for thinking the threat of COVID-19 was being dangerously exaggerated.

Since then, Dr. Ioannidis has done research on the prevalence of the COVID-19 virus which indicates that its fatality rate is likely comparable to the flu’s

Alan, the 4.5% number is derived from known cases. When selection bias is removed (testing only people who are sick), mortality is more like flu. Get a grip.https://t.co/HZ5Vi7UMFg

Media airheads like CNN’s S.E. Cupp excoriated President Trump for ignoring the science when he criticized Fauci. Meanwhile, in the real world, Nobel Prize-winning biophysicist Michael Levitt has been hammering away at how idiotic this lockdown is in terms that make the president’s remarks seem mild:

“Thus, the Western World has been encouraged by their lack of responsibility coupled with uncontrolled media and academic errors to commit suicide for an excess burden of death of one month. Surely we or someone we know can do something about this!” Now 105 days later! HELP!!! pic.twitter.com/Xa65z6ciFl

Likewise for Oxford University’s Centre for Evidence-Based Medicine. They’ve been presenting cold hard data since the day these lockdowns began showing that Fauci‘s testimony to congress that COVID-19 is “at least 10 times more lethal than the flu” had no basis in scientific reality.

The Oxford University Centre for Evidence-Based Medicine has updated its estimates of the fatality of corona:

Former chief of neuroradiology at Stanford University Medical Center, Dr. Scott W. Atlas warned us way back in April that, Fauci’s lockdown, rather than being based on science, contradicted the “empirical evidence” as well as the “fundamental principles of biology established for decades.” According to Dr. Atlas’s expert opinion:

The overwhelming evidence all over the world consistently shows that a clearly defined group — older people and others with underlying conditions — is more likely to have a serious illness requiring hospitalization and more likely to die from COVID-19. Knowing that, it is a commonsense, achievable goal to target isolation policy to that group… The appropriate policy, based on fundamental biology and the evidence already in hand, is to institute a more focused strategy like some outlined in the first place: Strictly protect the known vulnerable, self-isolate the mildly sick and open most workplaces and small businesses with some prudent large-group precautions… Let’s stop underemphasizing empirical evidence while instead doubling down on hypothetical models. Facts matter.

I could go on listing working physicians and distinguished scientists who are opposed to Fauci’s lockdown all day. And, like those already listed above but unlike Fauci, the reasons for their opinions would be clearly explained and their assessments wouldn’t change with the shifting political winds.

S. E  Cupp, Pete Buttigieg, and all the others who defend Fauci by chanting “follow the science” don’t have a clue what they’re talking about. Nothing could be less scientific than blindly following the word of some alleged authority and trying to bully everyone else into doing so by mindlessly regurgitating some idiotic catchphrase. Science is about believing things for a reason, not because some media-anointed expert insists on them.

Science is also about research. And if Cupp, Buttigieg and the rest had the slightest interest in discovering whether our response to COVID-19 was justified, they would have spent a half-hour doing some and found any number of prominent scientists and working physicians who believe these lockdowns have violated the basic tenets of science and completely reject Fauci’s scaremongering about COVID-19.

In fact, one scientist whose opinion both Cupp and Buttigieg respect published an article in the New England Journal of Medicine just 11 days before Fauci’s March 11 testimony to congress. And, just like all the many dissenters cited above, this highly respected researcher totally rejected Fauci’s frightening claim that COVID-19 is “at least 10 times more lethal than the flu.”

According to this researcher, whose opinions are also often featured in the mainstream media:

The overall clinical consequences of Covid-19 may ultimately be more akin to those of a severe seasonal influenza (which has a case fatality rate of approximately 0.1%).

The author of that New England Journal of Medicine piece was none other than Dr. Fauci himself. Apparently, the “expert opinion” to which S. E. Cupp and Pete Buttiegieg are trying to bully the rest of us into joining them in blind allegiance is for the rubes and not something Fauci wanted to present to other experts unlikely to fall for bogus stats.

So the next time someone tries to convince you that COVID-19 is substantially more deadly than the seasonal flu, just tell them they need to shut up and listen to Dr. Fauci.

Trackback URL for this entry: https://kickthemallout.com/trackback.php/Thousands_of_Doctors_and_Scientists_Have_Come_Out_Against_Faudis_Lockdowns