Editor's Note: These totally useless, bogus tests are responsible for creating the false perception that some horrible pandemic is occurring.  It's totally bull shit!  These so-called tests CANNOT AND DO NOT determine anything useful or definitive and should NEVER BE USED FOR DIAGNOSTIC PURPOSES!  The package itself says quite clearly: “The BinaxNOW COVID-19 Antigen Self Test does not differentiate between SARS-CoV and SARS…CoV-2.”  “Positive results do not rule out bacterial infection or co-infection with other viruses. The agent detected may not be the definite cause of disease.” 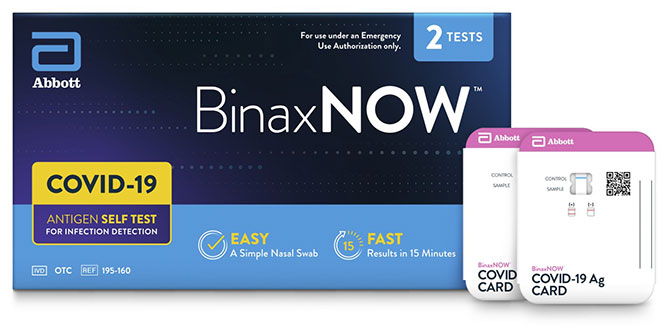 Since the beginning of the so-called pandemic, I’ve been attacking the value of the PCR diagnostic test from many angles. The primary angle, as my readers know, is: SARS-CoV-2 was never isolated, never proved to exist.

However, I’ve also ventured into the bubble world where a few billion people blindly accept the existence of the virus—and I’ve shown that even within that world, the internal contradictions and lies abound.

One again, now, I’m entering that bubble world, since the powers-that-be are widely promoting the use of an at-home test for the “virus.” This test is self-administered. No doctor, nurse, or technician is present. What could possibly go wrong, as millions of people perform the test on themselves?

Well, let’s lead off with DANGER.

The reference is an undated FDA document titled, “BinaxNOWTM COVID-19 Antigen Self TEST.”  The Binax test kit is manufactured by Abbott.

Here is the key quote: “The Reagent Solution [included in the test kit] contains a harmful chemical (see table below). If the solution contacts the skin or eye, flush with copious amounts of water. If irritation persists, seek medical advice…”

Then the FDA document lists that harmful chemical: sodium azide.

Just how harmful is it?

For an answer, let’s look at a CDC document titled, “Facts About Sodium Azide.”  We find this statement:

“Sodium azide is a rapidly acting, potentially deadly chemical that exists as an odorless white solid.”

Yes, as with all poisons, the degree of damage depends on the dosage, but you decide whether “potentially deadly,” as the CDC describes sodium azide, signifies a significant risk.

If you read the FDA document I referenced above, you’ll see that the reagent containing sodium azide is involved in the self-administered COVID test, and the whole test procedure is complex enough to allow fumbles and mistakes—such as a spill of the “deadly chemical.”

Don’t believe me? Try this FDA quote on for size: “To perform the test, an anterior nasal swab specimen is collected by the patient, then 6 drops of extraction reagent from a dropper bottle are added to the top hole of the swab well. The patient sample is inserted into the test card through the bottom hole of the swab well, and firmly pushed upwards until the swab tip is visible through the top hole. The swab is rotated 3 times clockwise and the card is closed, bringing the extracted sample into contact with the test strip. Test results are interpreted visually at 15 minutes based on the presence or absence of visually detectable pink/purple colored lines.”

See what I mean? Good luck.

Now let’s move on to the second problem with this at-home self-performed COVID test: it’s grossly misleading. The results are ambiguous.

The FDA document I’ve been quoting contains this gem:

“The BinaxNOW COVID-19 Antigen Self Test does not differentiate between SARS-CoV and SARS…CoV-2.”

BOOM. In other words, a positive test, indicating infection, could mean nothing more than infection with the 2003 “SARS virus”—and that “epidemic” was a dud. But wait, there’s more:

“Positive results do not rule out bacterial infection or co-infection with other viruses. The agent detected may not be the definite cause of disease.”

Double trouble. The person who tests positive could simply be housing bacteria in his body, AND whatever germ the test is detecting may not even be causing disease.

Other than that, the at-home test is perfect.

This Abbott BinaxNow at-home COVID test is the market leader. About 75% of all retail test-kit sales in the US come from Abbott.

Back in the early spring of 2020, I told you the test was the key to faking the pandemic. Now the government wants the population to perform the test-fakery on themselves. With, of course, the added danger of exposing themselves to a highly destructive chemical in the process.

But don’t worry, be happy. On many days of every week, little Tony Fauci will appear on television and inform you that testing is necessary, and he’ll omit grisly details. Trust him.

And then march forward, secure in the knowledge that lies and omissions keep us safe.

Trackback URL for this entry: https://kickthemallout.com/trackback.php/New_COVID_At-Home_Test_Dangerous_and_Misleading