It is increasing clear that top officials at the FBI are corrupt and actively obstructed the Hunter Biden investigation by deploying a lie to cover-up his suspected crimes.  At the same time, they concealed incriminating evidence.

No one should be surprised.  How else can you explain a four-year investigation that has gone absolutely nowhere despite reams of damning information?

Senior agency officials who seized Hunter’s laptop in December of 2019 falsely portrayed the credible contents as “disinformation” that was supposedly invented by foreign intelligence services.  It wasn’t true.  But on that sham basis and for purely political reasons, the bureau ordered the probe shut down.  No “valid reason” was provided, as required by FBI guidelines.  These bureau officials appear to have conspired with Senate Democrats in the run-up to the 2020 election to protect the Biden family and help Joe get elected president.

The multiple whistleblowers have not been identified pursuant to relevant law that provides protection.  But they have recently come forward to Senator Charles Grassley who revealed, “The volume and consistency of these allegations substantiate their credibility.”  Grassley suspects that both the FBI and the Justice Department have been “institutionally corrupted to their very core.”  He’s right. 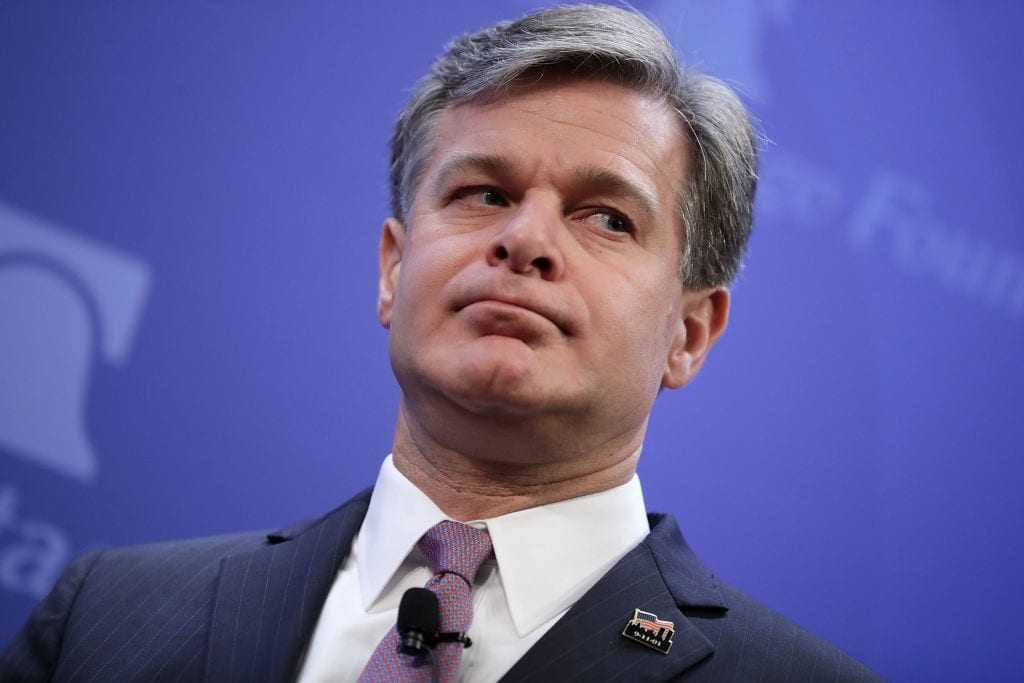 But it gets worse.  The unscrupulous FBI officials who’ve been running a protection racket for the Bidens are the same individuals who doggedly pursued President Trump in the Russia hoax even though they knew the allegations were fictitious and the alleged evidence was phony.

Don’t count on FBI Director Christopher Wray to cleanup his cesspool of an agency.  He’s either unwilling or incapable of doing the right thing.  The same is true of Attorney General Merrick Garland who has proven to be a disgraceful politically toady and utterly devoid of integrity.

As illicit schemes go, the FBI is batting a thousand.  During the 2016 election, the bureau launched an illegitimate investigation of Trump, which was promptly leaked to members of the media that serve as Democrats’ handmaidens.  It consumed and diminished his presidency.  The accusations turned out to be completely bogus, but the damage was done.  Mission accomplished.

In the 2020 presidential election, the FBI did just the opposite.  The agency used its muscle to secretly extinguish evidence of Hunter Biden’s criminality and suppress his father’s complicity.  The FBI’s lie worked like a charm.  Biden was elected president.  Had voters known the truth, they might have cast their ballots differently.

Who are the FBI agents behind the “disinformation” charade?  They’ve been identified as Brian Auten and Timothy Thibault.  The dynamic duo helped nullify the Biden probe and pushed misbegotten Trump investigations while hiding the biased political agenda of their sources.  Auten, in particular, either knew or should have known that the anti-Trump “dossier” was nothing more than a collection of fake stories.  Nevertheless, it was manipulated to secure a fraudulent warrant to spy on a Trump associate by lying to the FISA court.  The notorious document funded by Hillary Clinton’s campaign was also exploited to accelerate the wrongful investigation of Trump that, in the end, found no collusion conspiracy with Russia.

Fast forward to the 2020 presidential campaign.  It was always patently absurd and demonstrably false when 50 former intelligence officials publicly circulated a letter just before the election claiming that Hunter’s laptop was Russian disinformation.  The suck-up media treated it as gospel.  It wasn’t.

More than a year later, both The Washington Post and The New York Times confirmed the laptop’s authenticity.  How convenient that they waited until long after Biden’s election victory to verify what was obvious from the outset.  They chose to ignore incriminating evidence in a despicable effort to unduly influence a presidential election.

But now we know the real source behind that fabricated letter.  The discredited intel officials, who have never had the decency to retract or apologize for their misleading statement, took their marching orders from the crooked and politically hyped FBI.  Social media companies followed in lockstep, censoring the original New York Post story on the laptop and helping to elect Biden.

The FBI had Hunter’s laptop in its possession a year before the presidential election.  The bureau knew it was real.  The contents were fully analyzed and overflowing with evidence of influence peddling schemes.  But the agency kept it under wraps, taking no action to charge or prosecute.  Ten months later, when the intel officials bashed the laptop as Russian disinformation, the FBI knew it was a lie that the bureau had helped invent.  So, officials remained mute to help Biden get elected.  Instead of enforcing the law, the FBI aided and abetted lawlessness.  It obstructed justice.

Hunter Biden’s profiteering scams date back to 2014, and the FBI has known about it for years.  Any person not named Biden would have been indicted, prosecuted, and convicted long ago for influence peddling, money laundering, tax fraud, foreign lobbying crimes, and maybe even racketeering.  Hunter was selling overseas access to his father when he was vice president.  The foreign beneficiaries were the same countries over which Joe held sway in the Obama Administration.  America’s nation security was compromised in exchange for cold hard cash funneled into Biden accounts.  Some of the money came from our nation’s most dangerous adversaries.

U.S. banks flagged more than 150 financial transactions as sleazy to the point of being criminal.  Hunter never bothered to hide his enrichment flimflams.  He was blatant about them, as if he held some magical “get-out-of-jail-free” card tucked neatly in his pocket.  Turns out he did –the FBI.

Documents found on Hunter’s infamous laptop and statements from his business partners confirm that Joe was a key participant in his son’s lucrative graft.  “The Big Guy,” as he was called, benefited financially from Hunter’s chicanery and stood to gain millions from a China energy conglomerate with close ties to the Chinese Communist Party’s government.  When Joe was VP, father and son flew together to Beijing aboard Air Force Two where Hunter met with his prospective partners.

After the New York Post broke the story of Hunter’s laptop in October of 2020, his business partner, James Gilliar, referred to Joe as “the Big Guy” in a panicked message left that same day.  Gilliar, who greased the China deal, also cautioned, “Don’t mention Joe being involved, it’s only when u are face to face, I know u know that but they are paranoid.”  Paranoid?  Yes.  Clever?  Not so much.

There are numerous photographs of dinners and meetings, as well a visitor logs showing that Joe met personally with at least 14 of Hunter’s business associates while he was vice president.  Another associate, Tony Bobulinski publicly confirmed that Joe is “the Big Guy” and said he spoke personally with the senior Biden about the China deal.

The overwhelming evidence notwithstanding, the president consistently denies any involvement in his son’s dealings.  Joe insists that he never once spoke with his son about his businesses.  That’s a preposterous lie since the laptop contains a phone message from the elder Biden telling his son that he’s “in the clear” after the New York Times probed Hunter’s shady transactions with a Chinese oil tycoon accused of business crimes.  In an email, Hunter declared that he had “delivered” by getting access to his father and the White House for a foreign client.

The FBI is not alone in abusing its powers to protect partisan allies and punish political adversaries, according to Sen. Grassley.  The whistleblowers have also identified a top official within Merrick Garland’s Justice Department who has done the same.  Is it any wonder that no action has been taken to hold the Bidens accountable?

Don’t forget: Garland’s boss is President Biden.  The attorney general, who oversees the FBI, has refused to appoint a neutral special counsel to take over the investigation of the Bidens even though it is mandatory under federal regulations because of the glaring conflicts of interest.  Garland despises Republicans for denying him a seat on the U.S. Supreme Court.  Covering up for a Democratic president is his vengeance.  He’s the attorney general in name only.  Like Robert Duvall’s character in the “Godfather,” Garland serves as Biden’s “consigliere.”  He’s Joe’s protector, by hook or by crook.

Former Attorney General William Barr should have appointed a special counsel before he left office in advance of Biden being sworn in.  I said so at the time.  It was a no-brainer.  Delaware U.S. Attorney David Weiss, who has been investigating Hunter Biden for a myriad of crimes, could have been named special counsel to guard against political interference just as Barr elevated U.S. Attorney John Durham to special counsel status for the same reason.

Belatedly, Barr is calling on his successor to appoint one now.  Too late, Bill.  If you thought that Garland had an ounce of rectitude and could be trusted to act ethically, you’re a chump.  Predictably, your recent demand for a special counsel is falling on deaf ears.  Equal application of the law is a farce at Garland’s “Department of Injustice.”

Despite these institutionally corrupt efforts to cover up for the Bidens, House Minority Leader Kevin McCarthy is promising to hold them accountable if Republicans regain control of the House in November.  He is vowing an exhaustive investigation to unravel the web of deceit and suspected illegality.

Untangling that web will be a herculean undertaking.

Trackback URL for this entry: https://kickthemallout.com/trackback.php/The_Brief-The_FBI_and_DOJ_are_Running_a_Corrupt_Protection_Racket_for_the_Bidens