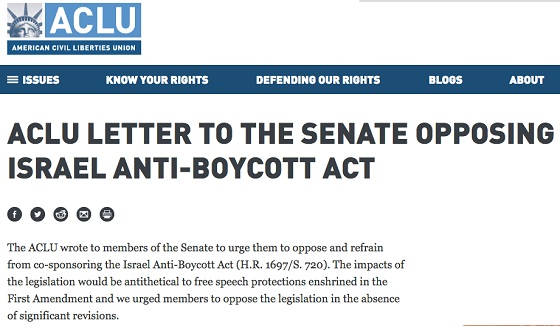 Greenwald reveals just how sneaky the AIPAC lobbying operates to deceive the bootlick Senators who would never dare to defy the Israel Lobby. Read carefully the sources used to create a perverted linkage of previous laws in their disgusting attempt to circumvent the constitution in order to criminalize behavior that opposes the Khazars rogue apartheid state of Israel.

"But as the ACLU put it, “Violations would be subject to a minimum civil penalty of $250,000 and a maximum criminal penalty of $1 million and 20 years in prison.”

That’s because, as Josh Ruebner expertly detailed when the bill was first unveiled, “the bill seeks to amend two laws — the Export Administration Act of 1979 and the Export-Import Bank Act of 1945,” and “the potential penalties for violating this bill are steep: a minimum $250,000 civil penalty and a maximum criminal penalty of $1 million and 20 years imprisonment, as stipulated in the International Emergency Economic Powers Act.”

Indeed, to see how serious the penalties are, and how clear it is that those penalties are imposed by this bill, one can just compare the bill’s text in Section 8(a), which provides that violators will be “fined in accordance with Section 206 of the International Emergency Economic Powers Act (50 U.S.C. 1705),” to the penalty provisions of that law, which state:"

Both the ACLU and The Intercept have a reputation of being left leaning. There is no such proclivity from the Daily Stormer.  Drunk on Their Own Kool Aid, Jews Protest Themselves at AIPAC, cites a report in the Jerusalem Post, "Protesters bore a banner saying: “Jews won’t be free until Palestinians are, reject AIPAC, reject occupation.”

Azzmador, the author of the Daily Stormer article contends.

"Jews are just crotchety people with no sense of humor whatsoever, that’s why they’re always protesting something, and if the gentiles have not done something worthy of marching and shrieking about on any given day (excluding Shabbos, of course) they will march against themselves.

You see, the Jews are the most hated group of people in history for a reason, and no one knows this better than other Jews, thus, they hate themselves. They hate themselves so much that they even have Knesset members (the Israeli version of a congressman) come to America to protest their own country, whatever sense that makes."

Wow, contention in the ranks of Israelis? Guess they may need AIPAC to set up their own versions in Tel Aviv. Watch the video, AIPAC 101 for U.S. appeal used to convince naive Americans that supporting Israel is in the best interests of our own country. As the factual evidence proves, formulating American foreign policy to advance Israel has demonstrated that a state of permanent war is a direct result from allowing Zionists to write or vote on our legislation.

They have been getting away with it for so long they don't even try to hide it.

Study the Philip Weiss essay: The Role of Jewish Democrats in Bill That Could Imprison Israel Boycotters for 20 Years

Nevertheless, reading the text of S. 720 goes too far for any objective participant in the legislative process. 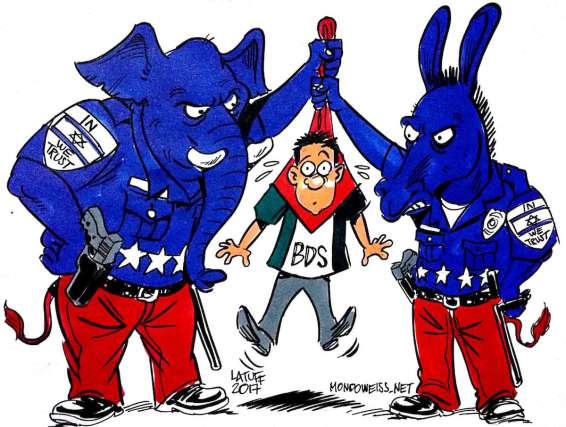 When The Boycott, Divestment, Sanctions (BDS) movement originated some twelve years ago, their mission was stated as to end international support for Israel's oppression of Palestinians and pressure Israel to comply with international law.

Today, Eric Levitz over at New York Magazine outlines the evolution of opposition to Israeli illegal occupation of the West Bank.

"The state of Israel maintains a military occupation of territories that were assigned to Palestinians by international law. Palestinian residents of the occupied West Bank are subjected to the discriminatory rule of a foreign army, while their Israeli neighbors enjoy the full rights of citizenship — a situation that many former Israeli officials have likened to South African apartheid.

The United Nations has repeatedly held that Israel’s maintenance — and expansion — of settlements in the occupied West Bank constitutes a violation of international law. Nevertheless, the occupation persists, as it has for half a century. At present, there is no discernible, diplomatic path for bringing it to an end.

In light of these facts, some American citizens and businesses have decided to avoid purchasing goods that are produced by Israeli companies in the West Bank, in the hope that such a boycott might nudge the Jewish state into compliance with international law. Others avoid conducting business with entities located anywhere in Israel for similar reasons."

As no fan of the UN, the operative standard is that international law cannot be ignored with the passage of punitive criminal punishments to Americans, who refuse to buy or sell with Shekel Shysters.

From the UK perspective, author William Eichler acknowledges in Banning boycotts: is history repeating itself?

"The Israel/Palestine conflict is, in a sense, an anachronism. Zionism—Jewish nationalism—was the movement of self-determination for the Jewish people. However, it could only be realised through the colonisation of territory that was (largely) populated by non-Jews. Furthermore, this could only happen with the help of the British empire which occupied huge swaths of the Middle East in the aftermath of the First World War."

Nowadays that complicity flows from the U.S. government. As long as bribes and targeted removal from office from the pro Israel lobby occupies the inner greed and fears of the political class, America will never free herself from the furthermost betrayer of true national interest.

The rejuvenation of the NeoCons in a Jared "Kosher" Kushner Trump administration lends itself for begging to the Wailing Wall. The NeoLibs are no different in their acquiescence to Talmud demands.

Ignoring this AIPAC initiative for placing Americans of conscience in the Judaistic crosshairs is an outrage of biblical proportions. Interested parties do not have to join this boycott movement to vigorously oppose the effort of making criminals for expressing their free speech rights.

As the decades fly by the evil that people do intensifies. The government of Israel has clearly demonstrated that humanity outside the tribe perceives their rule as The Synagogue of Satan. Yet, the prospects of Congress opposing this destructive Zionist culture are remote. Requiring AIPAC compliance with the Foreign Agents Registration Act (FARA) would be a start, but before this would happen, a sea change would need to occur in society.

Imagine the nefarious transgressions that the "so called" dual loyalists commit as they implement their Israel-First pressure on our representatives. Greenwald released the Snowden revelations. The Intercept now publishes a sober warning that must not be dismissed.

Envision a real independent special counsel investigation into AIPAC. Such a fantasy would cause the fake news presstitutes to formulate a sequel to their outrage used against those anti-Semitic holocaust deniers.

Protecting Israel is the prime objective for AIPAC. America's best interests are routinely shredded. The goy are treated as useful idiots. So why should we be shocked that AIPAC wants to make a place in concentration camps for those who reject their political reign of terror.

Trackback URL for this entry: https://kickthemallout.com/trackback.php/AIPAC_Seeks_To_Imprison_Americans_For_Opposition_To_Israel