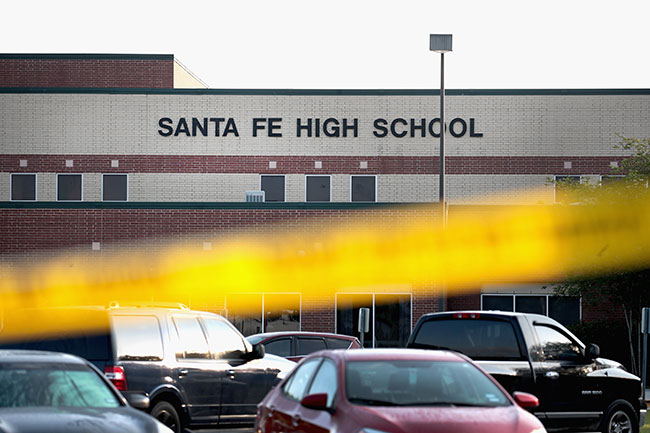 Something strange happened within a few days of the mass shooting at Santa Fe High School that killed 10 people and injured 14 others.

The story virtually disappeared from the news cycle. This is quite a remarkable change from the weeks of non-stop media coverage after the Parkland, Florida shooting that resulted in huge protests around the country and bad legislation in Florida.

First, there are a lot of similarities in the two atrocities. The killer in both instances was a mentally disturbed, bullied teenage boy who had shown warning signs. However, it is well-documented that in Parkland, law enforcement and school officials (government) missed or purposely overlooked dozens of red flags regarding the killer that could have prevented the killings.

Seventeen people were killed in Parkland. Ten were killed in Santa Fe. Both are located in conservative states with strong Second Amendment protections, although Texas is more conservative. Both have happened during a time of rampant but factually ill-founded fears of school shootings, and a media that has an anti-gun agenda it pushes shamelessly — including the use of grieving teenage survivors.

So what are the differences? Three stand out.

One, the gun that the Parkland killer used was an AR-15 semi-automatic rifle. It is what the media insists on calling an “assault weapon,” without ever really explaining or describing what is meant by the term. It’s scary looking and appears similar to military assault weapons. But it is the same as any semi-automatic rifle or pistol. One shot per trigger pull.

In Santa Fe, the killer used a .38-caliber revolver and a shotgun — not the infamous “assault rifles.” There is very little support among Americans for banning revolvers or shotguns. So that was one big difference.

The second is that the Parkland killer was never stopped. Officers stayed outside and did nothing while he continued to massacre people. He just finally quit murdering and walked away from his school slaughter, later being arrested at a fast food restaurant.

In Santa Fe, men with guns stopped the killer. The teen was cornered in a room by armed school security until more police arrived and he surrendered.

A final difference is in the community and the students. Parkland is in the heavily urbanized, liberal, anti-gun corridor of Southeast Florida, from Miami through Fort Lauderdale to West Palm. The students there reflect that urbanized sense of guns as frightening, and really do not seem to grasp the purpose of the Second Amendment. They came out very strong for gun laws and the media ate it up and national, liberal organizations quickly organized them.

Santa Fe is a semi-rural area of Southern Texas between Houston and Galveston. The people there see guns as part of the culture and have a more ingrained understanding of why there is a Second Amendment. For instance, almost no Santa Fe students participated in the national school walkout in March.

“I don’t think guns are the problem — I think people are the problem,” she said. “Even if we did more gun laws, people who are sick enough to do something like this are still going to figure out a way to do it. So it doesn’t matter.”

So the differences in coverage seem to be based at least somewhat on how it plays into the media narrative of blaming the NRA and gun owners and pushing for more gun control laws. Parkland — despite the myriad failures of government along the way, plays nicely into that narrative.

Rod Thomson is an author, TV talking head and former journalist, and is Founder of The Revolutionary Act. Rod is co-host of Right Talk America With Julio and Rod on the Salem Radio Network.

Trackback URL for this entry: https://kickthemallout.com/trackback.php/Why_The_Santa_Fe_Shooting_Disappeared_From_The_Headlines_So_Quickly