Americans Are No Fools, Trust Is Eroding In Dems ‘Witch Hunt’ 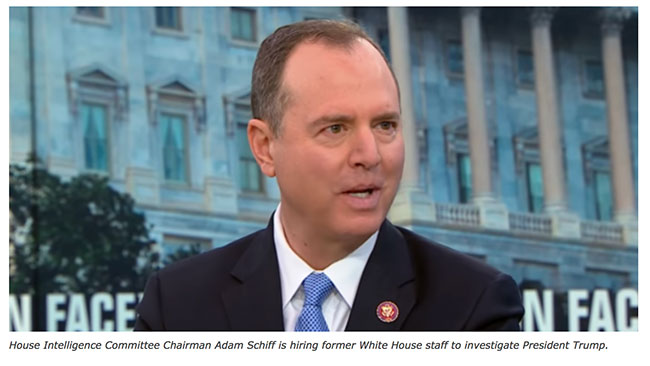 There should be no doubt the American people are not fooled by the nearly three years of the politically charged ‘witch hunt’ against President Donald Trump.

In growing numbers a greater majority of people, who are exhausted of being the pawns of Trump’s enemies, both Democrats and yes, some Republicans, want it to stop. Those enemies have worked diligently for two years to turn the nation against a sitting president and have him impeached.

There is no evidence that the Trump campaign was colluding with Russia. No matter which way his enemies try to dice it and slice it – they just can’t prove it because it is based on lies. The false narratives they’ve been spinning for nearly three years and frankly, their constant badgering of everything Trump, is exhausting.

California Democrat Adam Schiff, who promises to investigate everything Trump, should take heed of this public warning, and his like minded colleagues who want to pursue impeachment should do the same.

Special Counsel Robert Mueller’s report is expected to be completed soon. In fact, it already may be in the hands of Attorney General William Barr. However, it will be up to Barr to decide whether it is made public and more than likely some form of it will. Trump, along with all House members, have asked for transparency and they are right. After all, it’s tens of millions in tax payer dollars that were invested in this two year investigation.

Transparency And Moving On

According to a new Suffolk/USA Today Poll, revealed Monday that 50 percent of American’s agree with the president that Mueller’s investigation is a “Witch Hunt.” Those 50 percent of American’s believe Trump has been subjected to more investigations than previous presidents because of politics, while 47 percent disagree. Only three percent don’t have an opinion, according to USA Today.

Americans, for the most part, believe that there are more important matters to address like the economy, family, looming opioid crisis, border security, health care, veterans issues, infrastructure, foreign policy and the list goes on and on.

Whether you like Trump or not, he has lived through what no other president in history has had to endure and what’s tragic is that it’s not from foreign enemies but from enemies within.

Why? Because the nominee they believed would win was Hillary Clinton and many had been promised swanky positions in Washington D.C.  Further, they are elitists who think anyone who supported Trump is an idiot or “deplorable.”

These super East West Coast elites had planned on a Clinton victory. Just remember how many of the pundits on CNN, MSNBC, CNBC and even Fox News (which I am a contributor) laughed at the idea that Trump would be selected as the Republican nominee or even elected as President.

“There is no way Trump is going to be president?” If I had a dollar for every time I heard that statement coming out of one of Washington’s elite mouths, I’d be rich.

I wasn’t surprised one bit that Trump was elected. I was traveling throughout the country and actually spoke to people – that’s what journalists and pundits should do.

Americans are angry and frustrated at being ignored and belittled. Politicians serve the people, not the other way around and leaders get the job done without pontificating endlessly. That’s a major reason why Trump got elected.

Trump’s election literally put his enemies into a state of shock. I witnessed that too. It is what has now been described as “Trump Derangement Syndrome.” This degenerative mental illness swept across Washington D.C. like a 8.0 magnitude earthquake. It rocked so hard and its aftershocks have yet to cease. It left “Clintonite” believers without their footing, scrambling, crying and left those in the DOJ and FBI who worked so hard to cover up her campaigns alleged crimes searching for a way to bury their own misdeeds.

We know now – based on testimony – that Clinton was damaged goods. Those who supported her at the FBI knew it. Even former FBI General Counsel James Baker, believed she should’ve been indicted under the espionage until he was talked out of it at the last minute by now disgraced FBI Director Comey. She was, after-all, sending classified emails on her unclassified server.

So Clinton’s supporters within the DOJ and FBI exonerated her from her crimes. At the same time, they concocted a bogus investigation into the Trump campaign and alleged crimes with Russia.

It was a way of  deflecting from Clinton and the real crimes that the bureau had been investigating.

The FBI based their investigation into Trump’s campaign on a bunch of unverified raw intelligence – mostly made-up – to keep the main stream media outlets who also despised him busy by disseminating false narratives not only to the American people, but the world.

Trump posted Sunday night that “what the Democrats have in trying to steal a Presidential Election, first at the ‘ballot box’ and then, after that failed, with the ‘Insurance Policy,’ is the biggest Scandal in the history of our Country!”

He is right. It is the biggest scandal in modern American politics and the only way for justice to prevail is for Attorney General Barr should either appoint a second special counsel to investigate or ensure that the DOJ is actively reviewing the criminal referrals brought by lawmakers to be investigated.

Trump also tweeted on Sunday that “this was an illegal & conflicted investigation in search of a crime.” He added, “…..THIS SHOULD NEVER HAPPEN TO A PRESIDENT AGAIN!”

It absolutely appears that this was an illegal and conflicted FBI investigation. There is no room for burying this scandal. If we do, it will leave a stain on our nation and send a message that it is acceptable. It is not.

This is not just about Trump but the rule of law – the Constitution. We have seen what happens when those in power weaponize of our intelligence apparatus and federal law enforcement against a sitting president.

If our institutions are going to regain the trust of the American people, then Barr has no other choice but to ensure that what happened to President Trump’s campaign by those at the FBI and DOJ are investigated. If crimes were committed they should be prosecuted.

If this happens, we can all move forward. Hopefully, it happens sooner rather than later for all of us.

Trackback URL for this entry: https://kickthemallout.com/trackback.php/Sara_Carter-Americans_Will_Be_Stunned_By_Depth_of_Deep_State_Anti-Trump_Plot