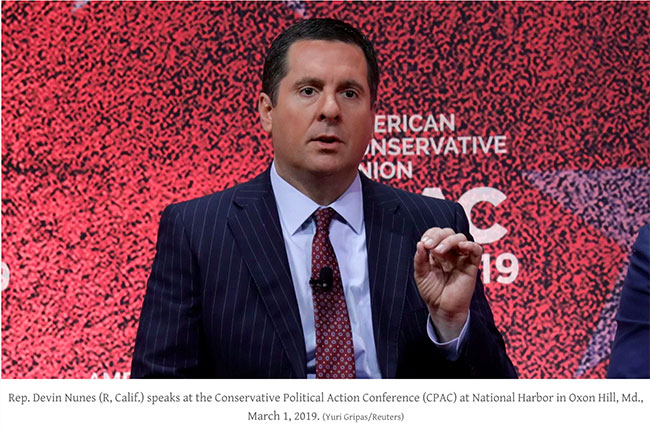 Representative Devin Nunes on Friday called for “everything” related to Special Counsel Robert Mueller’s Russia investigation to be made public.

“I want everything that Mueller did made public. I want every email, everybody that they wiretapped, every warrant that they got,” Nunes, the ranking Republican on the House Intelligence Committee, said during remarks at the Conservative Political Action Conference.

“I think the White House is going to ultimately have to get involved in declassifying all documents,” Nunes said, adding that he doubts the Justice Department will declassify all the documents, based on its previous reluctance to declassify other documents related to the investigation.

However, the California Republican also said he does not think any report on the probe into Russian meddling in the 2016 election will contain anything “worthwhile, with anything new.”

Nunes has frequently accused the FBI and Justice Department officials of harboring bias against Trump. He headed the House Intelligence Committee’s own Russia investigation in 2017 but recused himself after his controversial decision to visit the White House to examine classified documents.

Recent reports have suggested that Attorney General William Barr expects Mueller to wrap up the investigation and submit a final report in the next few weeks.

During his confirmation hearing, Barr told Congress that he intended to “provide as much transparency as I can” regarding reports on the investigation, but declined to promise to release the full report to the public.

“I also believe it is very important that the public and Congress be informed of the results of the special counsel’s work,” Barr told the Senate Judiciary Committee in January. “For that reason, my goal will be to provide as much transparency as I can consistent with the law.”

Trackback URL for this entry: https://kickthemallout.com/trackback.php/Devine_Nunes-Everything_That_Mueller_Did_Should_Be_Made_Public