Mel here. This is my own story of how I woke up and wound up here doing what I do. I guess I just have something more important I feel compelled to contribute than cat videos, let's plays, and makeup tutorials...

Texans affected by Hurricane Harvey, including my family and me, appreciate the outpouring of support from across the country. President Donald Trump has even pledged to donate one million dollars to relief efforts. These private donations will be much more valuable than the as much as 100 billion dollars the federal government is expected to spend on relief and recovery. 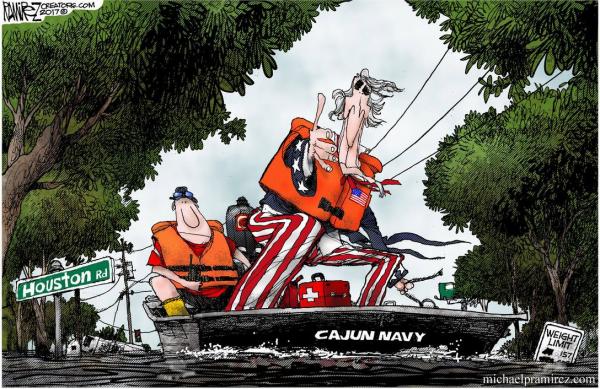 Federal disaster aid has existed since the early years of the republic. In fact, it was a payment to disaster victims that inspired Davy Crockett’s “Not Yours to Give” speech. However, the early federal role was largely limited to sending checks. The federal government did not become involved in managing disaster relief and recovery until the 20th century. America did not even have a federal agency dedicated solely to disaster relief until 1979, when President Jimmy Carter created the Federal Emergency Management Agency (FEMA) by executive order. Yet, Americans somehow managed to rebuild after natural disasters before 1979. For example, the people of Galveston, Texas successfully rebuilt the city following a major hurricane that destroyed the city in 1900.

Asking questions as Judge Andrew Napolitano did in a recent broadcast on his now cancelled daily show may very well be the reason behind his recent dismissal from Fox. Though specific details are hard to come by because the Judge has yet to give any interviews on the matter, it's believed that his refusal to bow to commonly manufactured media narratives is among one of several key reasons he is no longer with the network.

The following 5-Minute Speech that Got Napolitano Fired from Fox News is one that should not only be forwarded and shared with every single man, woman and child in this country, but taught and expounded upon in every social studies, civics and government class from first grade through college.

Everything Malcolm X would want you to know in 2017.

This is a clip from the George Carlin HBO Special "Jammin In New York" and emphasizes the only metaphor we have in public discourse for solving problems is to DECLARE WAR ON IT!

This reality is not by accident either.  Those that make trillions off wars perpetuate this view of problem solving and make sure it's beaten over our heads through the mainstream media and entertainment sources.  It's all driven by transnational corporate agendas and values that dominate our cultural views.

This is a clip from the George Carlin HBO Special "Jammin In New York" and emphasizes that our country is but a shell of what we once were.  We can't do anything well anymore except bomb countries and kill people!

This reality is not by accident either.  Those that make trillions off wars perpetuate this view of problem solving and make sure it's beaten over our heads through the mainstream media and entertainment sources.  It's all driven by transnational corporate agendas and values that dominate our cultural views.

Leave it to George Carlin to hand you the truth of things free of any sugar coating.  Sometimes we just have to hear the raw truth in a way that's a bit shocking.  We've become so complacent and accustomed to what the criminals running things do that a smack upside the head with the truth is just what the doctor ordered.

Rating: 0.00/5 (0 votes cast)
The Psychiatrists Law
People INTEND the logical consequences of the things that they do.

There are many reasons we find ourselves in the mess we're in but chief among them is the fact that a great many Americans believe the rhetoric that the main stream media and politicians spew on a daily basis.  Many Americans think they know who is controlling our government and they believe that they are telling the truth of things.

This short clip of Historian William Blum presents you with something that is extremely important for every American who claims to love this country to consider very seriously.  It is the one thing that allows the people in power to literally get away with murder!
So the big question we all need to be asking is "CAN WE AFFORD TO CONTINUE BLINDLY ASSUMING OUR LEADERS ARE DOING WHAT THEY ARE DOING BECAUSE OF NOBLE INTENTIONS?"
If the video won't play please report the problem by clicking here.

We speak of our government as if we know who it is, as if it's composed of only the politicians we see paraded before us.  The fact of the matter is the most wealthy transnational corporate interests control our government AND our military.  In fact they own our military and they are using it to advance their own selfish agendas in the name of National Security.   They have completely taken over our government and pull all the strings from behind the scenes, using government as their shield, doing everything in the name of American Interests.

If we don't wake up to the truth of who has control of our government and realize the last thing that they have is any allegiance to our country, we are not going to survive much longer as the United States of America.  These global elites are using our own government and our own military to literally destroy our national sovereignty, our once honorable reputation and our economy.  It's only our unwillingness to look past this blind faith in the noble intentions behind anything the government does that is allowing them to get away with everything they are doing.  The people doing this do not have good intentions and they are deliberately doing everything that is being done in our name.

If you really want to understand who's behind all the insanity, please read the book "War is a Racket" by Brigadier General Smedley Butler.   And listen to the interview with John Perkins, a self-described "Economic Hit Man."  Both can be viewed by clicking on the links below.
Related Links
Brigadere General Smedly Butler - War Is A Racket (Full Text)
Confessions of an Economic Hit Man

This nation used to be called "Land of the Free Home of the Brave."  Freedom and Liberty requires courage.  A free nation requires a brave and independent population.  True leaders inspire such things.  Our so-called leaders do nothing but perpetuate fear and dependence on the government.  These are not leaders worthy of our trust and support if we truly wish to live in a free country.

The people currently in control of our nation have conned everyone into believing something that is totally insane.  They have far too many people believing that it makes complete sense to give up your liberties and freedoms so you can have them.  They have everyone afraid they are going to be killed by some rabid, fundamentalist Islamic terrorist, when most people in this country has never even met a Muslim, much less a radical that wants to blow them up.

There are many, many greater threats to your safety than terrorism and you face them every day without a second thought.  The truth of the matter is you're far more likely to die from too much salt for God's sake.  Yes, 150,000 people die in this country every year from the hypertension caused by eating too much salt.  Over 3/4 million people die from prescription drugs!   So if our so-called leaders where worth a damn, they'd be inspiring courage and putting the true threat of terrorism in proper perspective.   But they aren't dong that because they aren't interested in protecting you.  They want to control you.  They want you afraid of your friggin shadow.

his short video contains a classic speech from the movie "The Matrix" when the character Morphius speaks to the remainder of the human race.  You can easily replace every reference to Zion with the word America, or whatever the name of your country is.  And for the word "machines" substitute the words "global elite."