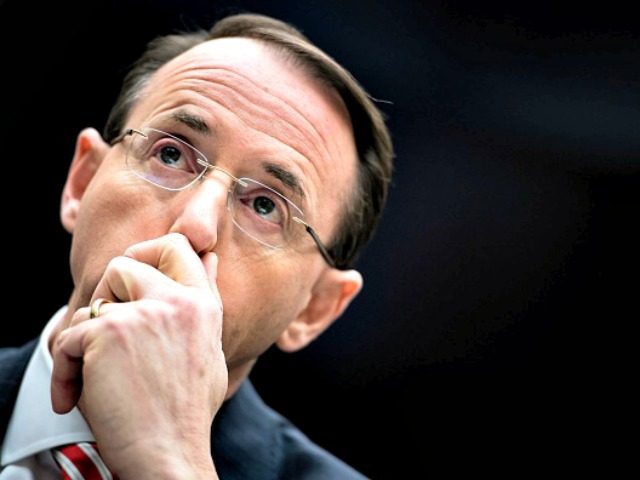 Meadows and Jordan argued that the Department of Justice (DOJ) had problematic decision-making during the 2016 presidential campaign and failed to comply with House oversight requests. The House conservatives also chastised the DOJ and Rosenstein for withholding “embarrassing documents,” knowingly hiding information from Congress, abusing the Foreign Intelligence Surveillance Act (FISA) process, and “failure to comply with Congressional subpoenas.”

Jordan said in a statement on Wednesday, “The DOJ is keeping information from Congress. Enough is enough. It’s time to hold Mr. Rosenstein accountable for blocking Congress’s constitutional oversight role.”

With Attorney General Sessions’ recusal, Rod Rosenstein has been in charge of the Department of Justice as the agency has made every effort to obstruct legitimate attempts of Congressional oversight. The stonewalling over this last year has been just as bad or worse than under the Obama administration. Multiple times we’ve caught DOJ officials hiding information from Congress, withholding relevant documents, or even outright ignoring Congressional subpoenas—and now we have evidence that Mr. Rosenstein signed off on a document using unverified political opposition research as a cornerstone of a FISA application to spy on an American citizen working for the Trump campaign. This level of conduct, paired with the failure to even feign an interest in transparency, is reprehensible. And whether you’re a Republican or a Democrat, this kind of obstruction is wrong—period.

Congress gave Mr. Rosenstein plenty of time to comply with our requests. We have been reasonable and up front with him. Unfortunately, at almost every opportunity, Mr. Rosenstein has resisted and defied Congress’s constitutional oversight. His time to obstruct our investigations has expired. Mr. Rosenstein’s Department is subject to constitutional checks and balances. I call on my colleagues to assert our constitutional responsibility and approve these articles of impeachment.

So far, the articles of impeachment have 11 cosponsors.

Read the articles of impeachment here.

Trackback URL for this entry: https://kickthemallout.com/trackback.php/V-Mark_Meadows_Jim_Jordan_Introduces_Articles_Of_Impeachment_Against_Rob_Rosenstein