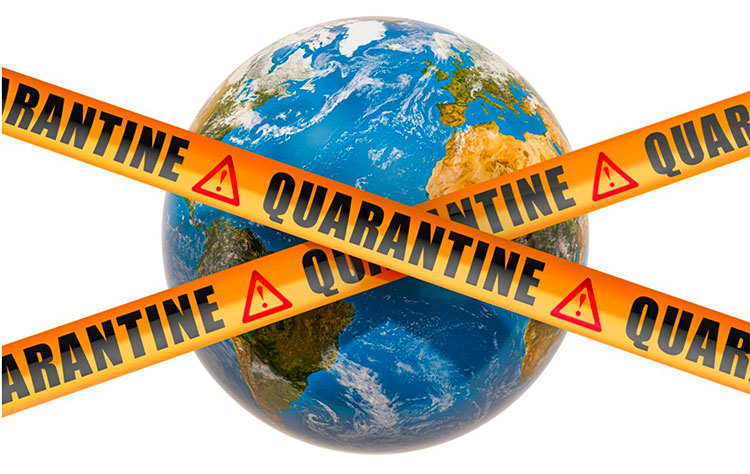 The toll lockdowns have taken on human life and human rights has been incalculable. Increases in child abuse, suicide, and even heart attacks, all appear to be a feature of mandatory stay-at-home orders issued by politicians who now rule by decree without any legislative or democratic due process. And then, of course, there is the economic toll on employment, which will feed negative impacts into the longer term. The economic burden has fallen the most on the young and on working-class families, whose earners are least able to work from home.

These measures also have made a mockery of basic human rights while essentially expropriating private property. Mom-and-pop business owners were told to shut their doors indefinitely or face arrest. The unemployed were told it was now illegal to work for a living if their careers were deemed “nonessential.” Police officers have beaten citizens for not “social distancing” while mothers have been manhandled by cops for attempting to use playground equipment.

This was all done because some politicians and bureaucrats—who were in no danger of losing their large paychecks—decided it was a great idea to carry out a bizarre and risky experiment: forcing large swaths of the population to stay at home in the name of preventing the spread of disease.

An Experiment Concocted by Governments

Indeed, politicians have long dreamed of forcing people into isolation en masse. But this was most recently revived during the George W. Bush administration. As the New York Times reported in April,

Fourteen years ago, two federal government doctors, Richard Hatchett and Carter Mecher, met with a colleague at a burger joint in suburban Washington for a final review of a proposal they knew would be treated like a piñata: telling Americans to stay home from work and school the next time the country was hit by a deadly pandemic.

Drs. Hatchett and Mecher were proposing…that Americans in some places might have to turn back to an approach, self-isolation, first widely employed in the Middle Ages.

How that idea — born out of a request by President George W. Bush to ensure the nation was better prepared for the next contagious disease outbreak — became the heart of the national playbook for responding to a pandemic is one of the untold stories of the coronavirus crisis.

The concept of social distancing is now intimately familiar to almost everyone. But as it first made its way through the federal bureaucracy in 2006 and 2007, it was viewed as impractical, unnecessary and politically infeasible.

And why was it considered impractical and unnecessary? There is more than one reason, but one major reason is that lockdowns have never been shown to be particularly effective. And this lack of success in containment must also be weighed with the very real costs of forced isolation. This was explained in a 2006 paper in Biosecurity and Bioterrorism called “Disease Mitigation Measures in the Control of Pandemic Influenza” by Thomas V. Inglesby, Jennifer B. Nuzzo, Tara O’Toole, and D.A. Henderson. The authors conclude:

There are no historical observations or scientific studies that support the confinement by quarantine of groups of possibly infected people for extended periods in order to slow the spread of influenza. A World Health Organization (WHO) Writing Group, after reviewing the literature and considering contemporary international experience, concluded that “forced isolation and quarantine are ineffective and impractical.” Despite this recommendation by experts, mandatory large-scale quarantine continues to be considered as an option by some authorities and government officials.

The interest in quarantine reflects the views and conditions prevalent more than 50 years ago, when much less was known about the epidemiology of infectious diseases and when there was far less international and domestic travel in a less densely populated world. It is difficult to identify circumstances in the past half-century when large-scale quarantine has been effectively used in the control of any disease. The negative consequences of large-scale quarantine are so extreme (forced confinement of sick people with the well; complete restriction of movement of large populations; difficulty in getting critical supplies, medicines, and food to people inside the quarantine zone) that this mitigation measure should be eliminated from serious consideration.

Measuring from the start of the year to each state’s point of maximum lockdown—which range from April 5 to April 18—it turns out that lockdowns correlated with a greater spread of the virus. States with longer, stricter lockdowns also had larger Covid outbreaks. The five places with the harshest lockdowns—the District of Columbia, New York, Michigan, New Jersey and Massachusetts—had the heaviest caseloads.

Basically, Luskin searched for a clear correlation between lockdowns and better health outcomes in relation to covid-19. He found none. He continues:

It could be that strict lockdowns were imposed as a response to already severe outbreaks. But the surprising negative correlation, while statistically weak, persists even when excluding states with the heaviest caseloads. And it makes no difference if the analysis includes other potential explanatory factors such as population density, age, ethnicity, prevalence of nursing homes, general health or temperature. The only factor that seems to make a demonstrable difference is the intensity of mass-transit use.

We ran the experiment a second time to observe the effects on caseloads of the reopening that began in mid-April. We used the same methodology, but started from each state’s peak of lockdown and extended to July 31. Confirming the first experiment, there was a tendency (though fairly weak) for states that opened up the most to have the lightest caseloads. The states that had the big summer flare-ups in the so-called “Sunbelt second wave”—Arizona, California, Florida and Texas—are by no means the most opened up, politicized headlines notwithstanding….

[T]here’s no escaping the evidence that, at minimum, heavy lockdowns were no more effective than light ones, and that opening up a lot was no more harmful than opening up a little. So where’s the science that would justify the heavy lockdowns many public-health officials are still demanding?

This is just the most recent of many studies of this sort.

In April, T.J. Rogers looked at “a simple one-variable correlation of deaths per million and days to shutdown” and found that “The correlation coefficient was 5.5%—so low that the engineers I used to employ would have summarized it as “no correlation” and moved on to find the real cause of the problem. (The trendline sloped downward—states that delayed more tended to have lower death rates—but that’s also a meaningless result due to the low correlation coefficient.)”

In May, Elaine He at Bloomberg showed “there’s little correlation between the severity of a nation’s restrictions and whether it managed to curb excess fatalities.”

In an August 1 study, also published by The Lancet, the authors concluded, “Rapid border closures, full lockdowns, and wide-spread testing were not associated with COVID-19 mortality per million people.”

the UK lockdown was both superfluous (it did not prevent an otherwise explosive behavior of the spread of the coronavirus) and ineffective (it did not slow down the death growth rate visibly).

In fact, the overall trend of infection and death appears to be remarkably similar across many jurisdictions regardless of what nonpharmaceutical interventions (NPIs) are taken by policymakers.

In a paper published with the National Bureau of Economic Research (NBER), authors Andew Atkeson et al. found that covid-19 deaths followed a similar pattern “virtually everywhere in the world” and that “Failing to account for this familiar pattern risks overstating the importance of policy mandated NPIs for shaping the progression of this deadly pandemic.”

Along these lines, Simon Wood, examined the progression of the disease in the United Kingdom and in Sweden and found that the data

strongly suggest that the decline in infections in England and Wales began before full lockdown, and that community infections, unlike deaths, were probably at a low level well before lockdown was eased. Furthermore, such a scenario would be consistent with the infection profile in Sweden, which began its decline in fatal infections shortly after the UK, but did so on the basis of measures well short of full lockdown.

Extraordinary measures require extraordinary evidence. And the burden of proof is on those who seek to use the coercive power of the state to force people into their homes, cripple the economy, and abolish countless basic freedoms for the duration. Have the advocates for lockdowns made their case? It's hard to see how they have. For one, advocates for lockdowns need to present obvious and overwhelming evidence that lockdowns bring big benefits far in excess of the no-lockdown approach. They have not done so. Moreover, they have not shown that a lack of lockdowns is anywhere near as dangerous as they have claimed in the name of pushing lockdowns to begin with. We can already see what the no-lockdown scenario looks like. It looks like Sweden, and that's a better outcome than many prolockdown regimes can claim. Governments are nonetheless likely to continue claiming their lockdowns worked. In ancient days, a witch doctor might perform a rain dance on Tuesday and claim credit when it rained on Wednesday. Lockdowns are increasingly looking like the modern equivalent of a rain dance.

Ryan McMaken (@ryanmcmaken) is a senior editor at the Mises Institute. Send him your article submissions for the Mises Wire and The Austrian, but read article guidelines first. Ryan has degrees in economics and political science from the University of Colorado and was a housing economist for the State of Colorado. He is the author of Commie Cowboys: The Bourgeoisie and the Nation-State in the Western Genre.

Trackback URL for this entry: https://kickthemallout.com/trackback.php/The_Evidence_Keeps_Piling_Up_That_Lockdowns_Do_Not_Work