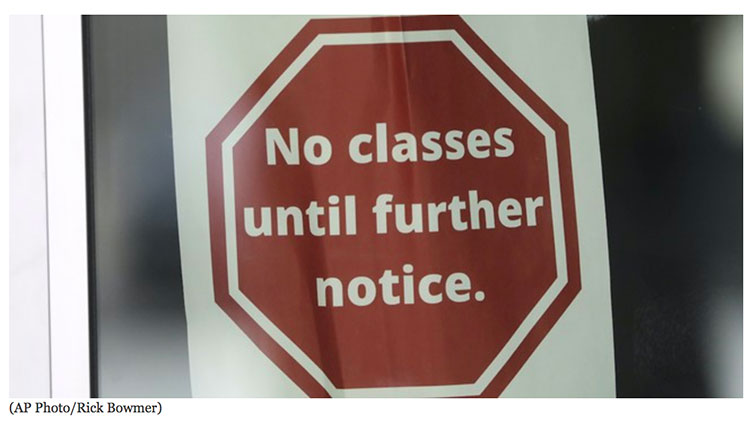 “The people never give up their liberties but under some delusion.”
–Irish statesman and philosopher, Edmund Burke, 1784.

Suppose that, after surveying 100 people, I discover 10 of them are left-handed.

The next day I survey 200 people and turn up 20 southpaws.

On each of the next 8 days, I survey 100 more people than the previous one. And the number of left-handers keeps increasing by 10.

Finally, suppose that I send a reporter the following graph (which is not the one mentioned in the title, you’ll find that further down) to use in a story headlined:

If all of that happened, two things would be obvious:

If we keep surveying more people for left-handedness, then, of course, we’ll keep finding more.

If for some bizarre reason you started suspecting that the number of left-handed people might be mysteriously rising, you wouldn’t care about the absolute number I find each day when you send me out to test your hypothesis.

What you’d want to know is the ratio of the number of left-handed people I discovered on any given day out of the total number I surveyed.

The ratio of those who, as it were, tested positive to the total number tested stayed at 1/10 every single day.

Hence, contrary to the scam my reporter friend and I were trying to run, the number of left-handed people didn’t increase at all.

Except somehow, the very same scam has been successfully used to convince the American public that the U.S. suffered an enormous “second wave” of COVID-19 infections in July; which of course, in turn, was then used to justify the continued imposition of completely unprecedented and equally unnecessary restrictions on our liberty that make the taxes King George III leveled on our founding fathers look trivial by comparison.

We’re being forced to wear masks whenever we go out in public. To add insult to injury, they don’t even do anything to stop the spread of viruses.

And, if you’re so brainwashed that you still can’t accept the obvious fact that your breath is pouring out of the sides of that mask you’ve got on, here’s a long list of research some conscientious person put together showing that wearing it (a) does nothing to stop viruses from spreading but (b) may be harmful to your health.

Parents are also being threatened with another round of school shutdowns, which again wouldn’t be necessary even if cases really were rising. We know from at least three sources that people without symptoms don’t spread COVID-19.

They were likely just false positives, as are about .7% of NY PCR test results.

The second is the first documented U.S. COVID-19 case, who wasn’t diagnosed until she developed pneumonia a week after returning from China. Her husband didn’t accompany her, but was hospitalized 8 days later and then diagnosed with it as well.

Of the 372 people the CDC tracked down who had contact with either of them, not a single one caught the virus. The only person she gave it to was the man she lived with as husband after she developed symptoms. And he infected no one else at all.

And for the record, this Lancet study (from March!) looked at our first patient in US. She also had hundreds of contacts, and only infected one person–her spouse–while she was symptomatic.https://t.co/1NYej1UqcP

The third source telling us that asymptomatic cases don’t drive the spread of COVID-19 is… wait for it… none other than Anthony Fauci himself; just one month before he decided it was necessary to needlessly shut down the country and, as Trump’s new COVID-19 advisor Dr. Scott Atlas pointed out in May, kill way more people than the virus would have even on the most absurdly exaggerated fatality projections.

On January 28, Fauci assured Americans that:

Even if there is some asymptomotic transmission, in all the history of respiratory born viruses of any type, asymptomatic transmission has never been the driver of outbreaks.

Fauci 1/28/20: “Even if there is some asymptotic transmission, in all the history of respiratory born viruses of any type, asymptomatic transmission has never been the driver of outbreaks.”

If more remembered this, schools would be open normal with temp checks at the door. pic.twitter.com/0ymWFaEPLV

Businesses are also being forced to stay closed or limit the number of patrons due to manufactured hysteria over a rise in case numbers that occurred while testing was massively increasing.

In Maine, depriving workers who get paid in tips of enough customers to make a living wasn’t enough. Governor Mills decided to add a little humiliation to the menu by forcing them to wear their COVID shields upside down and around their necks like a dog cone.

Gov Janet Mills says – servers must now wear face shields upside down so that their breath is directed up, not down. Yes she wants you to wear a dog cone… peak insanity. I wish this was a joke.. its real

And, again, since people without symptoms aren’t spreading the virus, the continued decimation of the entire restaurant industry and concomitant destruction of hard-working Americans’ ability to earn their daily bread serves no legitimate purpose even if the “second wave” of COVID infections were real.

Given that the virus only poses a real threat to the elderly and antecedently ill anyway, all we ever needed to do was keep sick people away from them instead of, you know, forcing infected patients into nursing homes like the man Anthony Fauci singled out for doing such a bang-up job handling the virus, New York Governor Andrew Cuomo did.

But, for the moment, let’s adopt the same attitude that Congress and the Department of Justice evidently have.

Let’s totally ignore that the U.S. officials charged with guarding public health engaged in a deliberate campaign of disinformation in order to get Americans to accept a bunch of completely unnecessary restrictions that rained down untold hardship, misery, and death.

Even had the deadly rules inflicted on us served some legitimate end, the spike in cases being used to justify keeping them in place is just as much a hoax as my graph showing a mysterious increase in left-handed Americans.

A researcher who’s worked tirelessly exposing the deadly lies those charged with keeping us safe from disease have been peddling these past six months has produced a graph that every one needs to see. It’s the proverbial picture worth a thousand words proving exactly how much of a hoax the supposed “second wave” of COVID-19 cases is.

See that gray area with the enormous second peak dwarfing its first? That’s the graph of daily positive tests for the virus that’s been used to keep us afraid and amenable to further control. Just like the daily increase in left-handedness in my earlier graph, it’s meaningless since testing was also increasing.

The orange line shows just how much testing increased. Note how nicely it matches the spikes in the gray area used to frighten us into submission.

But, most importantly, the dark blue region represents the data we really care about: the ratio of positive tests to the total number given. And, as you can see, there was never any big “second wave” of COVID-19 infections. And all the assaults on our liberty for which it served as excuse were justified by an odious lie.

They will be teaching this in sociology classes hundreds of years from now. The quintessential case of how large numbers of experts can be controlled to ends of destructive ignorance – by means of mob rule.

A mob rules by violence, panic and social intimidation. pic.twitter.com/aBZjx5y60z

Even that very slight uptake in cases corresponding to the phony huge “second wave” likely isn’t real.  It’s probably all or mostly just an artifact of the false positive rate the tests have together with the massive increase in the number given.

Here is the impact of 1, 2 and 3% false positives on our actual inflated case detections reported by the states. pic.twitter.com/wakgS3pSij

Fauci, CDC director Robert Redfield, and the rest of the bureaucrats who pushed us into needlessly self-immolating over COVID-19 may not be the scientific geniuses the media has hyped them as. But they aren’t dumb enough not to know that second enormous gray wave of COVID-19 infections comes from fraudulently presenting the wrong data.

Yet they did nothing to correct the needless hysteria it caused and, in fact, helped sustain it by insisting that further restrictions like forcing everyone to wear masks were necessary when the real data showed that new COVID-19 cases – apart from a very slight rise that itself likely represents nothing more than the false positives you’re bound to get when you increase testing – were steadily falling to a tiny fraction of their mid-April peak.

It wasn’t just a scam, it was their scam. Just like all the other misinformation about the virus both Fauci and Redfield have been spreading since their hoax began.

Last week, we learned what anyone paying attention has known for months. The American people have acquired ideas about COVID-19 from those leading the nation’s response so utterly divorced from reality as to warrant the epithet delusional.

This is from the Franklin-Templeton Gallup research project on people’s response to Covid 19. The misperceptions are shocking. More on this here: https://t.co/8DKxHbjJ2t pic.twitter.com/KY3Rmja40G

And that’s not even taking into account that COVID-19’s official fatality count is itself the product of bogus stats. In addition to other factors massively inflating it, anyone who happens to die while diagnosed WITH the virus is being counted as dying FROM it, regardless of how little a role it played in their demise.

Few Americans know that, when a local CBS affiliate examined 581 reported COVID-19 fatalities in Palm Beach, Florida, they discovered that far less than a third (169) had actually died from the virus.

Most don’t even have a clue that the COVID-19 death tally they’ve been terrorized with for months has included motor-cycle fatalities and gunshot victims.

And the ensuing delusional panic that COVID-19 is vastly more deadly to the young and healthy than the flu – when even on the inflated death stats it turns out to be much less so – has inflicted more damage on the American people than any terrorist or foreign army has managed in all our history.

Yet neither Fauci, Redfield, nor any of the lesser bureaucrats responsible for making sure the American people are accurately informed about the virus has done a damned thing to correct the completely unjustified state of fear gripping our nation – not even after last week’s poll announced the basic facts about which the public has been so tragically deluded.

Nobody went on television to tell us our fears were groundless and that more lives would be saved if young and healthy Americans stopped panicking about their own well-being and we, instead, focused on keeping the infected away from the elderly and antecedently ill.

Nobody in any of the agencies whose job it is to keep us informed about COVID-19 said a word to correct the dangerous delusions revealed to be gripping the American public.

That by itself ought to be enough to get someone in Congress or at the DOJ to start asking some serious questions about what the experts leading our response to COVID-19 have been up to these past six months.

Sadly though, they seem content to watch us suffer and die, deprived of our liberty, crushed under the needless burden of cruel and humiliating restrictions, huddled in corners afraid to breathe or let anyone else come near, obsessively covering our faces in a delusional state of panic.

Trackback URL for this entry: https://kickthemallout.com/trackback.php/The_COVID_Testing_Scam_Was_Just_Exposed_In_One_Graph