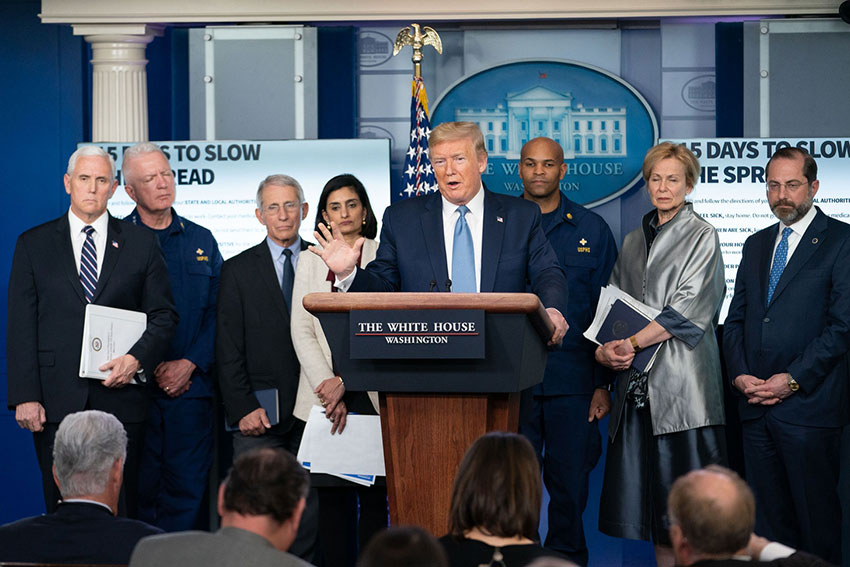 President Trump took in the early days of 2020 from a position of incredible strength.  At the beginning of the year, no serious analyst would have told you that he was in major jeopardy of losing the 2020 election. The American economy was booming, we had solid employment numbers, no major international crises, and the president was setting up a bold agenda for his second term to further “drain the swamp” and bolster his domestic policy priorities. Election fraud was always a potential factor to be monitored, but there was no massive, unprecedented mail-in voting scheme to worry about.

But news reports coming out of Wuhan, China indicated that a potentially threatening situation was afoot. On January 29, President Trump acted with haste in authorizing the creation of a White House Coronavirus Task Force. A month later, the small task force expanded to include Vice President Mike Pence as its chairman. In what will be looked back on as a catastrophic delegation mistake, the VP decided to appoint Dr. Deborah Birx as the response coordinator for the task force. Prior to the COVID crisis, Birx was best known for her work on an HIV/AIDS vaccine, which does not exist. She had never been anywhere near having access to the levers of power in America.

The COVID task force would soon grow to 27 members, but several of the individuals appointed to the task force are cabinet level officials, and could not devote their entire portfolio to the coronavirus. That led to an opening that allowed for Dr Anthony Fauci, Dr Deborah Birx, CDC Director Robert Redfield, Surgeon General Jerome Adams, and a few others to monopolize the policy shop set up by the task force for the coronavirus crisis.

With much of the world succumbing to total fear, panic, and hysteria, and a wave of new lockdowns hitting Europe and elsewhere, President Trump remained incredibly level-headed. In discussing COVID-19, the president reminded his colleagues that the “cure could not be worse than the disease.” There was a chance that America would join Sweden and a handful of other nations balking at the trend to hit the self-destruct button.

Fauci and Birx had other plans, and they eventually found a diabolical method to ratchet up the pressure to such an incredible extent that the president would finally agree to their demands.

In mid March, with the “European wave” in full swing, the two government bureaucrats presented junk epidemiological models to the president that seemed more like a hostage-like situation than policy advice. Birx and Fauci vouched for the supposed science of a mere model devised by a handful of academics in England, which claimed that millions of Ameicans would die if President Trump did not lock down the nation immediately. The coronavirus was presented as a ticking time bomb that would wipe out a significant percentage of the nation if the president did not act right away. Under enormous pressure to “do something” to react to the crisis, the president made the fatal mistake of agreeing to what was advertised as a very temporary two week lockdown policy initiative. At the flip of a switch, the president authorized the federal response plan, and state governors were now instituting what was marketed as a 15 day reset in order to retain hospital capacity for the supposedly deadly wave that was coming to America. We were told that after the two weeks, things could then return to normal and that the 30 million small businesses across America would be able to open back up relatively unscathed.

15 Days to Slow The Spread then became 30 Days To Slow The Spread. The so-called crisis kept growing to the point that the task force members were soon not even addressing the end point to their draconian policy demands. The president, who already had severe doubts about the policies pushed by Fauci, Birx, Redfield, and crew, eventually acceded so much territory to the public health bureaucrats that it seemed at times he had handed over the keys to his presidency to the task force.

The Fauci-Birx policy goal posts continued to shift dramatically over the course of the Spring. The goals were no longer about retaining hospital capacity, but permanently transforming the nation into a COVID safety regime, despite the data rolling in showing a disease that was not nearly as threatening as once perceived. The U.S. economy was no longer booming. Instead, it was in a self-inflicted freefall. Tens of millions of Americans were in crisis, and right in the middle of what was now a heated election cycle. The health bureaucrats’ coronavirus policies were tearing apart the fabric of the nation, and the presidency was now very much up for grabs. The president could no longer point to his economic record, his peacetime regime, or his steady hand, because all of these talking points were being compromised by bad coronavirus policies.

All of a sudden, the president was now on defense, having completely lost the narrative to the panic mongers in government and media. The 2020 campaign was very much within the margins of a contested election.

President Trump, having privately evolved to “Team Reason” on COVID policy, and having witnessed the reality that the coronavirus was not living up to its destructive hype once promised by Fauci and Birx, wanted to take action to correct the record.

He tried to reset the narrative and bring back a reasonable, rational policy, but it was too late. America had already decided to buy the pseudoscience that Fauci and Birx, among others, were selling to them.  It was no longer politically suitable to simply dismiss his prior capitulation to the public health bureaucrats on his task force. Fauci had become a worshipped celebrity figure with solid approval ratings, and sadly, much of the nation was now propagandized into supporting the disastrous lockdowns that were destroying the nation.

Many on the “Team Reason” side of the debate celebrated the appointment of Dr. Scott Atlas, — at the personal request of President Trump — as a desperately needed breath of fresh air for a task force that was peddling failed ideas and junk science. But Atlas, to no fault of his own, failed to make an impact on the task force. That’s because the fix was in from the beginning. The team assembled by VP Pence, which at this point was unapologetically, publicly recommending an extreme COVID policy agenda of economic and societal destruction, went to work immediately to distance themselves from Atlas, and waged a full fledged information warfare campaign against him.

Sources in the Trump Administration, who had first-hand access to Coronavirus Task Force meetings and conversations, made it clear to me that the health bureaucrats made it their mission to destroy and delegitimize Scott Atlas, who quietly resigned from his role in late November. Sources familiar with Atlas’s thought process told me that he was incredibly frustrated by the government bureaucrats’ devotion to their select non pharmaceutical interventions, such as lockdowns, mask mandates, and other forms of societal and economic devastation. Atlas also remained frustrated by what could be described as a lack of overall intellect on the task force.

Emails surfaced showing that White House Task Force members such as Birx, Fauci, Redfield, and others were enraged that Dr Atlas came to the table with a different set of ideas, and they rightly perceived him as a threat to their monopoly on their pro-lockdown COVID messaging campaigns. Birx, for her part, routinely sent out emails through private channels to media reporters and her colleagues seeking to undermine the ideas presented by Atlas, while simultaneously refusing to defend her ideas or debate his solutions in person.

By the time President Trump decided to rebuke the task force in calling for an expedited return to normalcy, the political damage had already been done. The president’s campaign messaging was stuck in a strange place between attempting to have their COVID cake and eat it too, in recognizing that polling shifted in the direction of the restrictionist camp.

By agreeing to Fauci and Birx’s initial COVID ransom situation demands, the president set in motion a wave of momentum against him that he could never get back.

We are now just days away from President Trump being replaced by Joe Biden, and the White House COVID Task Force, led by career bureaucrats and incompetent politicians, continues its broken mission. For reasons that remain unclear, Fauci, Birx, and the gang remain on the COVID Task Force, and to this day, the White House is still delivering corona panic to states across the nation. The Task Force will live on, and to the not-so-hidden delight of its members, President Trump is president no more.

Trackback URL for this entry: https://kickthemallout.com/trackback.php/How_the_White_House_COVID_Task_Force_Sank_the_Trump_Presidency