Editor's Note:  As usual, the name they give to legislation if precisely the OPPOSITE of what it's going to achieve.  The LAST THING this crap is for is "the people." 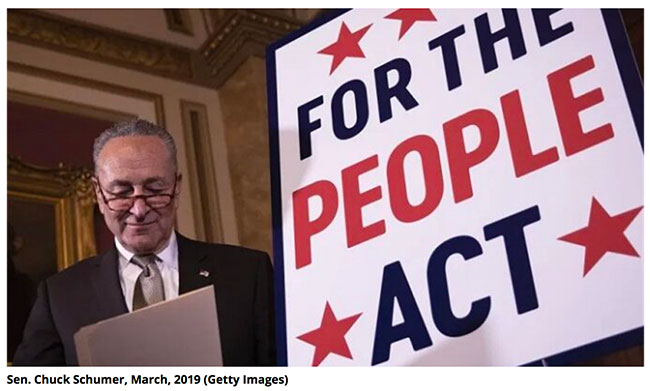 The Democrats have stepped up their assault on the Republic by submitting a bill with a whopping 791 pages designed to destroy the fabric of this country.

H.R.1 is being called “Democracy Reform” by the Marxists. It is a full on attack on our Republic, individual state’s sovereignty, and the Constitution.

Telling the uninformed masses that this is only about voter reform is very disingenuous. Yes, they attack the voter regulations of individual states and give control to the Federal government, but that is only the beginning.

The Marxists-Democrats that introduced this bill believe they have the authority to control all elections.

As a result, Congress finds that it has the authority pursuant to section 5 of the Fourteenth Amendment to protect the right to vote.

Congress also finds that States and localities have eroded access to the right to vote through restrictions on the right to vote including excessively onerous voter identification requirements, burdensome voter registration procedures, voter purges, limited and unequal access to voting by mail, polling place closures, unequal distribution of election resources, and other impediments.

Let’s not forget the race card:

And now they want to lower the voting age, as well.

Congress further finds that electoral practices including voting restrictions related to college campuses, age restrictions on mail voting, and similar practices burden the right to vote on account of age.

They have also set very strict rules for challenging eligibility, therefore “non-residents” will have a much easier time of voting.

But they do not stop there!

So far, we have only touched on a few of the voting changes in the bill. But that is not all this atrocity covers. The Marxists are also using it as a vehicle to allow for Washington DC to gain statehood, regardless of the Constitutional prohibitions against it.

Hang On, We haven’t finished yet!

This offensive rubbish also mandates that Congress completely take control of all redistricting. They intend to set up a commission to force federal jurisdiction over all of the redistricting within the various states in which they outline criteria for redistricting and who can (and cannot) be a part of the commission.

Of Course there is even more!

They want to set up yet another commission to slap anyone that complains about… well, anything they do.

The threat of a foreign state actor, foreign terrorist organization (as designated pursuant to section 219 of the Immigration and Nationality Act (8 U.S.C. 1189)), or a domestic actor carrying out a cyber attack, influence operation, disinformation campaign, or other activity aimed at undermining the security and integrity of United States democratic institutions.

There is so much more to this stinky pile of cowplop. If you would like to read it for yourself, we suggest you get comfortable, as it will take awhile.

Trackback URL for this entry: https://kickthemallout.com/trackback.php/HR1_Marxists_Introduce_Democracy_Reform_Bill-the_For_the_People_Act