One of the strangest things about our recent national madness has been the role of Professor Neil Ferguson, the physicist who has somehow come to dominate Johnson’s Covid policy.

Physicist? Yes, that is his main academic discipline. He doesn’t even have a Biology O-level, as he himself cheerfully admits. But that’s no odder than his repeated record of wild predictions of vast numbers of deaths, for a variety of diseases from foot-and-mouth to mad cow, which can kindly be described as exaggerated.

And then there’s his complicated private life, which resulted in a pretty clear breach of the miserable restrictions he had helped to impose on the rest of us. As with all such cases, I don’t blame him for breaking the stupid rules. I despise him as a hypocrite for supporting them and then thinking they didn’t apply to him.

Matt Hancock, the Health Secretary, said at the time that it was ‘just not possible’ for Ferguson to continue advising the Government. But this was not true. The professor was said to have resigned from the SAGE advisory committee. But did he? Not really. A current State website lists him as a member of the ‘New and Emerging Respiratory Virus Threats Advisory Group’ (NERVTAG). Minutes suggest he was only ever away from that for a few weeks. But this is small potatoes, set beside an amazing admission by Ferguson in a recent interview with the semi-official newspaper The Times. Here, Ferguson spoke of SAGE’s growing admiration for China’s tyrannical attempts to contain Covid. 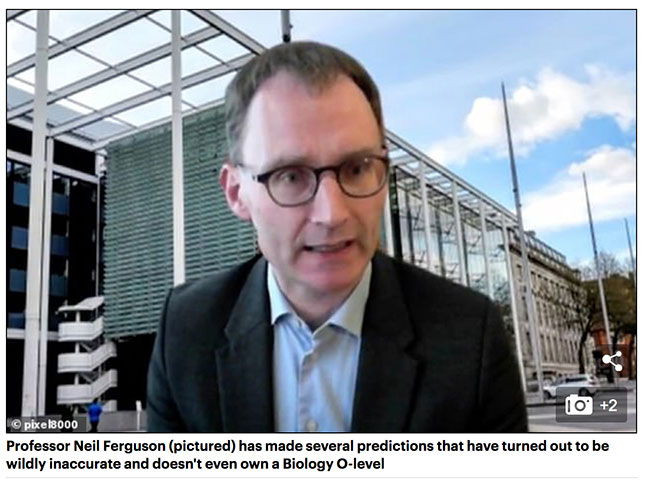 To begin with they thought – with good reason – that the dishonest and repressive Chinese state was covering up the truth about the Wuhan outbreak. I am sure they still are covering it up.

Last week, after a ‘trial’ of a few hours, Zhang Zhan, 37, a Chinese former lawyer and citizen journalist, was sentenced to four years in prison. She was originally arrested in Wuhan in May for ‘picking quarrels and provoking trouble’ – a non-crime often alleged against dissidents in China. Then she was charged with ‘disseminating false information’ about Wuhan.

She went on hunger strike against her treatment. But this was China, not a free country. Her lawyer says (and I don’t doubt it) that she had a feeding tube forcibly inserted and her arms restrained to stop her pulling it out. Those who managed to see her in the courtroom before she was condemned and sent off to Peking’s Gulag say she appeared there in a wheelchair, her hair cropped. 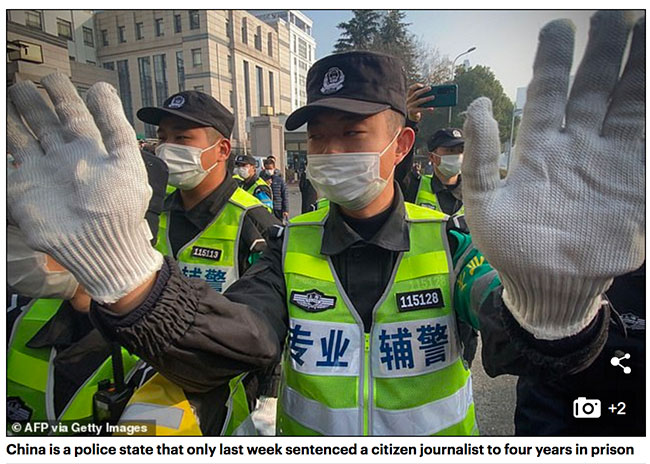 Modern China is a horrible place, cruel, ruthless and unembarrassed. But for some reason SAGE came to like Peking’s Covid strategy. Ferguson told The Times that ‘as the data accrued it became clear it was an effective policy’.

I’d be interested to know how the SAGE geniuses evaluated data from this police state, which lacks a free press or independent universities. But there.

Even so, they hesitated. As Ferguson says: ‘It’s a Communist one-party state, we said. We couldn’t get away with it in Europe, we thought.’

Aren’t those words ‘we couldn’t get away with it’ interesting? Is this the way in which public servants in a free country think of the normal limits on what they can do? I can only hope not.

But Ferguson and his friends then saw what happened in Italy, where a formerly free country reached for the weapons of repression and mass house arrest. And the rule of fear was so great that they got away with it. So we were next. Or, as Ferguson puts it: ‘And then Italy did it. And we realised we could.’

They could. But they did not have to. They chose the Chinese way. And so they ‘got away with’ beginning a disaster which still continues. There is still no evidence that any of this Chinese-inspired repression has worked.

Every country that has locked down has failed to control the disease and keeps doing the same thing over and over again in the hope of getting a different result.

The shame of it is that the lockdown fanatics did ‘get away with it’, and continue to do so. That is, quite simply, because most of the responsible people in our society did not stand up for wisdom and freedom but allowed themselves to be swept away in a flood of State-sponsored fear, like so many pawns.

Read this news report: ‘Many A&E units have been severely overcrowded in recent days, with patients lying in corridors and ambulances queuing outside.

‘Hospitals have already been forced to cancel tens of thousands of operations and NHS chiefs fear things will only get worse… On Tuesday, hospitals were ordered to cancel up to 55,000 non-urgent operations and put patients in mixed-sex wards to create more room.’

Sound familiar? But actually it’s three years old, from the Daily Mail of January 6, 2018, under the headline ‘Now the NHS tells us: Don’t get ill.’

If you look back into the archives of any newspaper or TV news station, you will discover that the NHS has a ‘winter crisis’ thanks to overloaded intensive care wards, year after year.

But nobody ever thought before that this could be solved by strangling the country and forbidding grandparents to hug their grandchildren.

I do not doubt that our intensive care units are overloaded now.

But it is odd, since this was so foreseeable, that the huge new Nightingale Hospitals have been so little used to deal with this.

Why were they built at huge expense, if not for this moment?

One day last week, BBC Radio 4’s self-important Today programme played a recording of President Franklin Roosevelt rallying his people against the Great Depression in 1933. It was thrilling to hear. He said: ‘The only thing we have to fear is… fear itself – nameless, unreasoning, unjustified terror which paralyses needed efforts to convert retreat into advance.’

It was an admirable thing to say. But who in our government or the BBC could now say such a thing, having themselves made such shameless use of nameless, unreasoning, unjustified fear, so they could get away with behaving just like, well, Chinese dictators and their hired mouthpieces?

Trackback URL for this entry: https://kickthemallout.com/trackback.php/Guess_Where_Professor_Lockdown-Crackpot_Neil_ferguson-Got_His_Ideas-Chinas_Politice_State