Editor's Note: Remember the FRAUD caught on security cameras where workers are seen scanning the same ballots at least three times?  Well, FINALLY, we have a courageous judge who sees it for what it is and decided to do something about it. 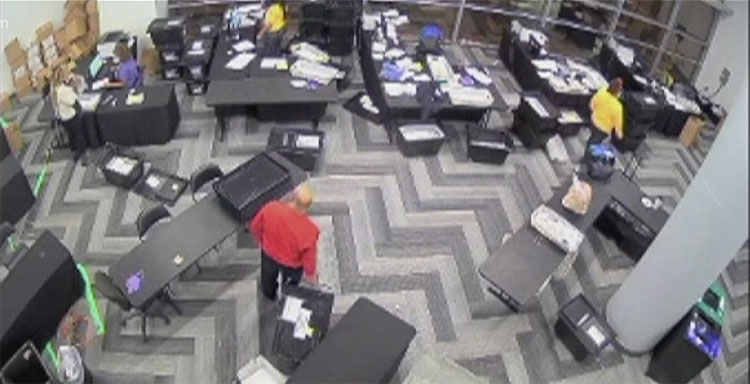 A judge in Georgia on Friday ruled to unseal absentee ballots submitted in the 2020 presidential election.

Petitioners in an ongoing case will be able to go to where the ballots are stored in Fulton County, Henry County Superior Court Judge Brian Amero said at the conclusion of a hearing.

Amero plans to issue an order soon that will set forth protocols governing a fresh scanning of the ballots, which will be done by county workers while petitioners and their experts observe.

A group of voters filed a petition last year asking for a forensic inspection of mail-in ballots that were sent in for the 2020 election. The petition alleged an abnormal vote increase for Democrat presidential candidate Joe Biden and an abnormal reduction in President Donald Trump’s tabulation, among other alleged abnormalities.

Amero allowed the petitioners in March access to scanned images of the ballots, but attorneys for the petitioners argued in court that the resolution, 200 dots per inch (DPI), was too low to perform proper analysis.

The petitioners asked for images at 600 DPI or higher, and access to the ballots themselves.

David Sawyer, a forensics expert, testified for the petitioners. He said he identified a discrepancy in the number of batches that were received by petitioners and the number that Georgia Secretary of State Brad Raffensperger’s office listed as having been examined in a risk-limiting audit.

He told the judge that direct access to ballots would be best “because that’s the original evidence, and that’s the best evidence.”

Lawyers for Fulton County and Georgia Attorney General Chris Carr, a Republican, argued that letting the petitioners examine the ballots outside of the presence of county workers would violate federal law. They also said a “citizen audit” wasn’t provided for in state law. If the judge allowed such an audit, he should pick the auditing team or allow the parties to reach an agreement on which firms should do the audit, they added.

Amero assured them he was largely of the same mind.

“I have no inclination at all to release these ballots to anyone other than the clerk or the county,” he said.

But he pushed back on the notion that petitioners did not have the ability to get better scans of the ballots or visually inspect them.

“That seems to be something that they have the authority and the right to do,” he said.

“I have never seen in this case a motion to dismiss from anyone for any reason and in the absence of considering things in that way then this does take the form of a civil case where there is some discovery” under state law, he said.

The parties are scheduled to meet at the Fulton County ballot storage location on May 28.

Raffensperger told The Epoch Times via email: “From day one I have encouraged Georgians with concerns about the election in their counties to pursue those claims through legal avenues. Fulton County has a long standing history of election mismanagement that has understandably weakened voters’ faith in its system. Allowing this audit provides another layer of transparency and citizen engagement.”

Raffensperger, who asked the judge last month not to grant petitioners access to the physical ballots, will have a representative present next week.

Fulton County did not return an inquiry.

Trackback URL for this entry: https://kickthemallout.com/trackback.php/Georgia_Judge_Decides_to_Unseal_Absentee_Ballots_in_Fulton_County_for_Review