The court’s decision represents a victory against authoritarianism,
but censorship by Covid scaremongers should still trouble Americans.

A federal judge halted California’s attempt to censor doctors when, last Wednesday, the court enjoined the state statute that banned medical professionals from spreading purported “misinformation” or “disinformation” to their patients about Covid-19. The decision represents the latest victory against the authoritarian edicts that quickly followed the outbreak of the pandemic three years ago but continue to this day.

In August of 2022, California Gov. Gavin Newsom signed into law Assembly Bill 2098 (AB 2098), adding a new provision to California’s extensive regulations governing the professional and ethical conduct of physicians — regulations that ban practices ranging from human cloning to performing a pelvic exam on an unconscious or anesthetized female patient without her knowledge or consent. 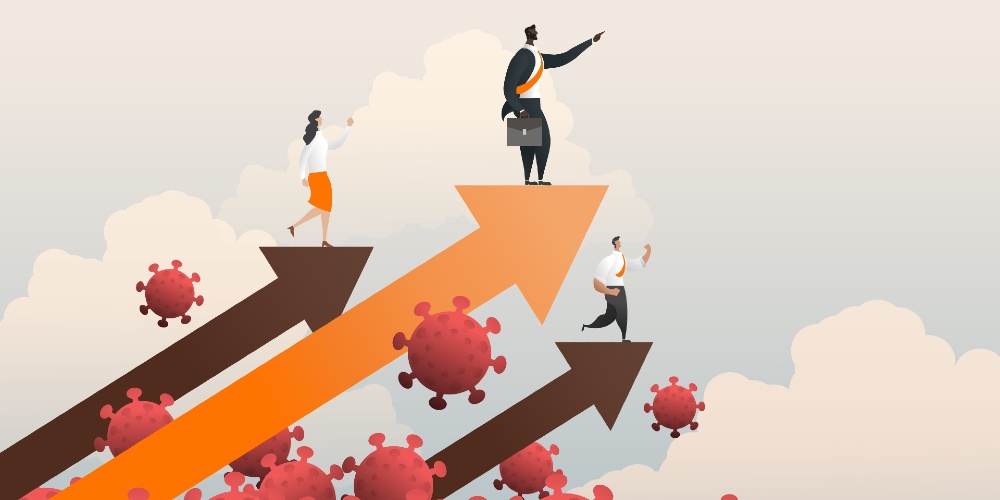 By May 2020, it had become apparent that the standard practice of putting COVID-19 patients on mechanical ventilation with ventilators was a death sentence.1 As early as April 9, 2020, Business Insider reported2 that 80% of COVID-19 patients in New York City who were placed on ventilators died, which caused a number of doctors to question their use.

Researchers in "gold standard" collaboration struggle to find benefit from surgical over no masks, or N95 respirators over surgical. Findings buoy warnings by PPE expert that even "perfect rate of capture" by N95s can't stop COVID transmission.

If the video won't play please report the problem by clicking here.
x

An international research collaboration that reviewed several dozen rigorous studies of "physical interventions" against influenza and COVID-19 through last year failed to find even a modest effect on infection or illness rates from masks of all qualities.

The CDC is still recommending masking in areas with "high" transmission levels — fewer than 4% of U.S. counties — as well as indoor masking to protect high-risk contacts in "medium" counties (27%).

Masks are still required in educational institutions in Democratic strongholds such as New York, New Jersey, Massachusetts, Pennsylvania, Washington and California, according to the Daily Mail. Boston Public Schools denied its "temporary masking protocol" in early January was a "mandate," following a public letter against the policy by student Enrique Abud Evereteze.

South Korea is still requiring masks on public transport and in medical facilities after dropping COVID mandates in most indoor settings, including gyms, Monday, Reuters reported. 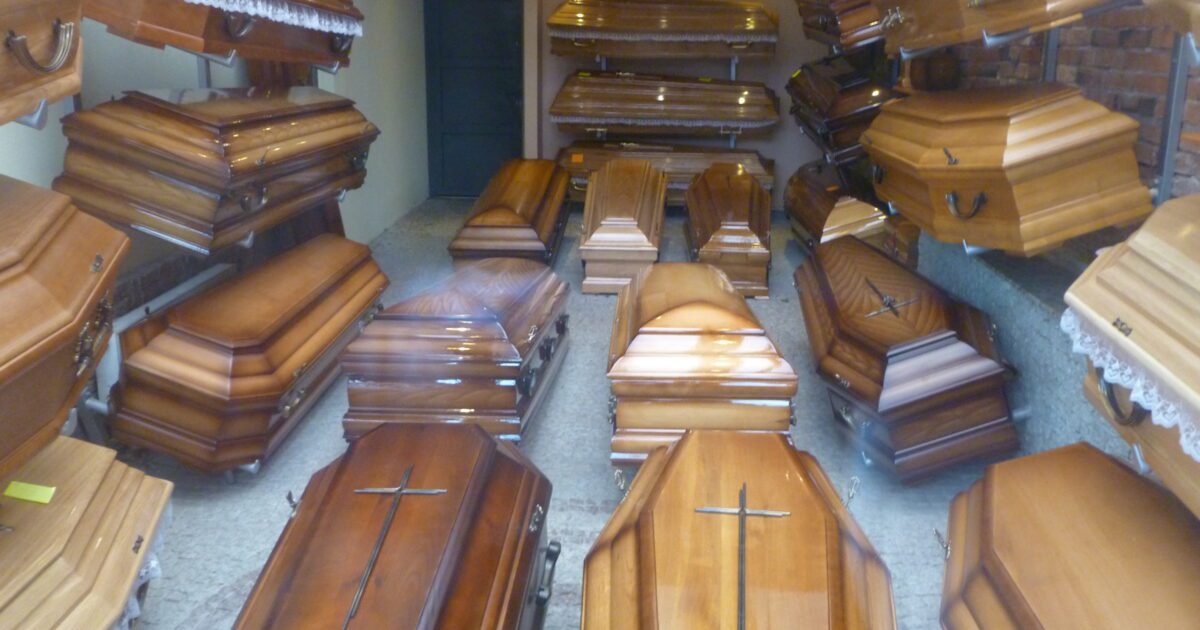 Nigel Farage interviewed a former European Parliament MEP and a senior member of the UK Office for National Statistics, James Wells, on the massive spike in excess deaths since the rollout of the experimental Covid “vaccine.”

Wells told Farage that ‘we need an independent public inquiry’ into excess deaths, as they have reached an average of more than 1000 a week for the past six months.

Fact-checkers and Big Tech lost another round with purported COVID-19 misinformation this week, when an American Heart Association journal published research suggesting the spike protein used in mRNA vaccines can harm some people.

The peer-reviewed study in Circulation reviewed 16 adolescents and young adults hospitalized at Massachusetts General Hospital or Boston Children's with post-vaccination myocarditis from January 2021-February 2022. All had "markedly elevated levels of full-length spike protein" in their blood, "unbounded by antibodies."

The Harvard Medical School researchers affiliated with the hospitals did not find free-floating spike in 45 "healthy, asymptomatic, age-matched vaccinated control subjects," despite "essentially indistinguishable" antibody profiling and T-cell responses between the two groups.

FINALLY, a comedian with the coconuts to deal with the COVID Elephant in the room! 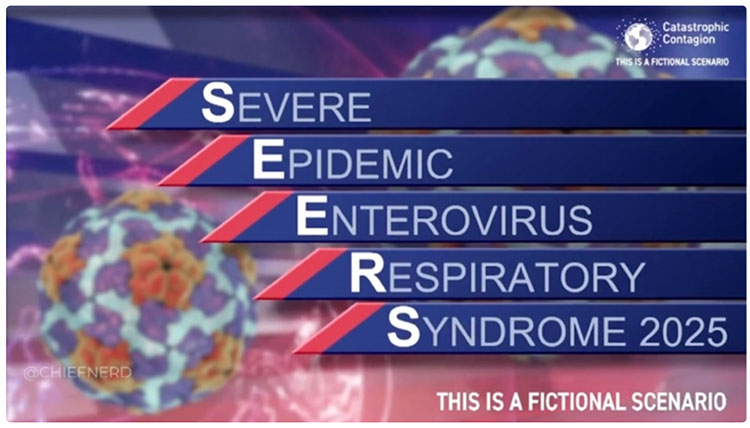 The Johns Hopkins Center for Health Security, in partnership with the World Health Organization (WHO) and the Bill & Melinda Gates Foundation, conducted another pandemic tabletop exercise in Brussels, Belgium, on October 23, 2022.

The same people behind Event 201, which took place almost three years ago to the day, just completed a desktop simulation for a new Enterovirus originating in Brazil.

Public health schemes adopted in the U.S.
to ‘flatten the curve’ were shaped by
a WHO-backed, CCP-driven agenda, not scientific evidence.

In the recent deposition of Anthony Fauci in Missouri v. Biden, a civil lawsuit against the Biden administration over alleged free speech violations, Fauci acknowledged that Dr. Clifford Lane, clinical director at the National Institute of Allergy and Infectious Diseases, who was appointed to the February 2020 World Health Organization-China Joint Mission team, told Fauci that he was “impressed” with China’s successful management of the Covid outbreak.

In doing so, Lane conveyed to Fauci his belief that “extreme social distancing policies” were essential to curtailing the spread of disease. During his deposition, Fauci stated that he had “every reason to believe” the accuracy of Lane’s evaluation and admitted that “social distancing, even by somewhat difficult means” that involved “essentially the entire community” was possible in the U.S. as early as February 2020. 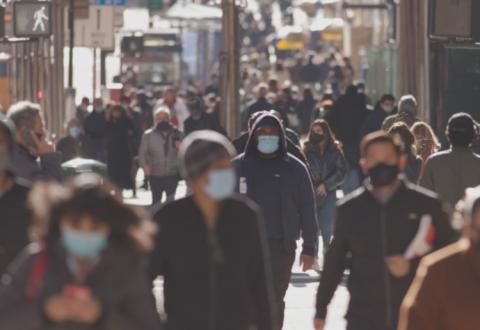 The mishandling of the covid-19 pandemic by global elites has severely eroded confidence in expert opinion. New information is emerging that senior officials doubted policies that were foisted upon the American public. By sharing the results of his deposition with Dr. Anthony Fauci, Missouri attorney general Eric Schmitt exposed Fauci’s advocacy of face masks as insincere:

Another tidbit from the Fauci depo: In Feb 20 he emailed a friend advising her that masks were ineffective. Confirmed again on Mar 31. On April 3 he’s adamant masks should be worn even though he couldn’t cite a single study to prove it. Mandates followed—Lives ruined.

Numerous studies disputed the efficacy of face masks, yet mask mandates rose to national prominence. During the apex of pandemic hysteria, the American Institute for Economic Research ran a series of scathing articles debunking the usefulness of face masks. In fact, one prominent 2020 study boldly admitted that mask use is primarily symbolic: The Gateway Pundit previously reported in May that the Missouri and Louisiana Attorneys General filed a lawsuit (Missouri v. Biden) against the Biden Administration, including Joe Biden himself, Anthony Fauci, the Department of Homeland Security and nearly a dozen federal agencies and Secretaries.