Arguably one of the most important books ever written!
If you want to know the truth of things and have the courage
to overcome conditioned attitudes


(conditioned by those committing unspeakable crimes against humanity) 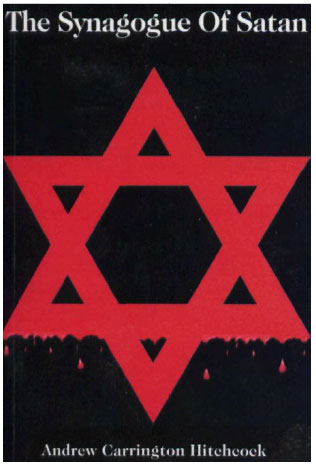 Review by Barabar Powell
This is a must read for all people today
-- required reading for anyone who aspires to understand the world we are actually living in now. After reading this book, so much of what's going on, and has been going on during the last century or so, suddenly makes SENSE. Perplexing events, social conundrums, the "whys" and "how could this haves" that have plagued thinking people in recent decades are clearly answered. A picture emerges which is totally cohesive. The way that Hitchcock structures his book is very unusual but truly brilliant: he merely states a year, beginning with 740 A.D., and lists pertinent historical events that occurred that year. He offers very little commentary, but his theses are supported all the more powerfully because he doesn't -- the facts speak eloquently, shockingly, clearly for themselves. He brings his chronology all the way up to the year 2005. Yet within this unorthodox structure is a narrative which is exceedingly readable. It's fascinating, gripping even. This is one of the most illuminating and important books I have ever read, and I believe you will ever read. It is a liberating experience; the truth will, indeed, set you free. Thank you, Andrew Carrington Hitchcock; you are owed immense gratitude by us all.

Review by Benjamin R. James Jr.
If you truely want to break free ftom the matrix of our media (medium) of what is happening you must read this book. Mr. Hitchock takes the veil off of who the "they" are and what doing is really happening, and definds who the they are. This Jewish Mafia with its satanic cult that has been around for ages and has manipalated world events for their gain is finally exposed in detail. This jewish mafia cares not if millions of jews or non jews are killed as long as their objectives are met which is control of gold, oil, and drugs. This is a must read.

"When I wore the White Lives Matter tee, I had four SoFi stadium shows -- they canceled my shows! I said 'it's up!'" he says. "I want you to visit Planned Parenthood -- that's our Holocaust museum."

Ye, the artist formerly known as Kanye West, went off on the “Jewish media” for slandering him as crazy and trying to take him down in a wild interview with Drink Champs released late Saturday night.

This in-depth, 4 part investigation was aired then immediately banned and removed from the Fox archives right after 9-11, a lot have people still have never seen it and is a must for the first step in the process.  Gee, you think Israel has have power over what you are allowed to see and hear?  Hardly anyone is aware of this info.

Steve Pieczenik exposes how the Mossad compromises people by ensnaring them in acts of pedophilia and how it's arguably "the most powerful way to control people" which is why there has been so much effort put into keeping it hidden from public view.

I want to understand what motivates the Southern Poverty Law Center in its persecution of those of us, who are considered to be Conservative Christians, Alt-Right, or Sovereign Citizens of the United States.  It is abundantly clear we are under attack while groups like Black Lives Matter are given respect and left alone to “protest.”

Also, we know that Google secretly chose Southern Poverty Law Center to monitor YouTube, giving them the power over our First Amendment Rights.  Much of the Conservative YouTube community has been banned from YouTube, and it is a great loss and injustice.

The below video explains the relationship between Google and the Southern Poverty Law Center.

The Southern Poverty Law Center has labeled Dr. Ben Carson, Laura Ingraham, and Jeanine Pirro as Extremists.  Apple just gave SPLC one million dollars, and Eric Schmidt trusts them as the watchdog for YouTube. However, Antifa and Black Lives Matter are not labeled as Extremists.   Conservative figures are being targeted consistently by the SPLC. An apology needs to be given to Conservatives.

As I began to research the SPLC, I discovered it is much worse than I thought.  I believe at this point Conservative Christians and the “Alt-Right” are truly in danger.  As we watched as ISIS slaughtered and persecuted Christians, I think some of us sensed this was the beginning of what the Bible told us would occur.