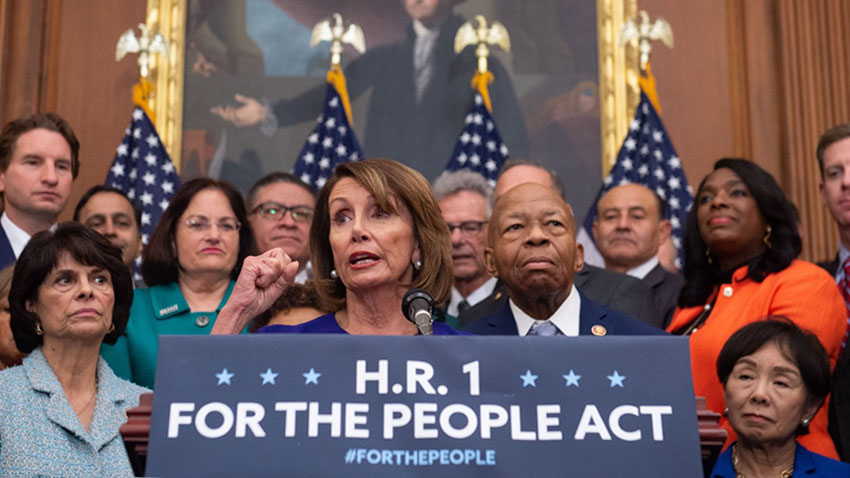 Every single Democrat — 222 hardly-moderate Democrats — has signed onto H.R.1, the inappropriately named “For The People Act.” It will enshrine corrupt voting practices into law to forever steal elections for Democrats. Hard-left Democrats want total power, and this will give it to them.

As the pandemic wanes, Democrats want this bill to continue insurmountable voter fraud.

Democrats introduced HR1, a bill that will destroy our country. It nationalizes the vote and makes every corrupt form of voting legal. It ends voter ID nationwide and allows ballot harvesting, felon voters, a path to DC statehood.

That majority and the power that comes with it is what open borders is about. It’s what the demonization of Trump and his supporters is about.

The bill would ensure Democrats win all elections in perpetuity. HR1 goes under the guise of protecting our elections for the people.

In his speech before CPAC this weekend, Donald Trump urged Conservatives everywhere to band together and defeat H.R. 1 before it is too late.

If the Democrat communists pass this bill, no Republican will ever win a presidential election again.

Please call your representative and senator and demand this bill be stopped. People say we will be California, but it will be far worse than that. It’s the road to Cuba with no turning back.

Trackback URL for this entry: https://kickthemallout.com/trackback.php/All_Dems_Signed_Onto_HR1_the_Bill_That_Will_Destroy_the_United_States