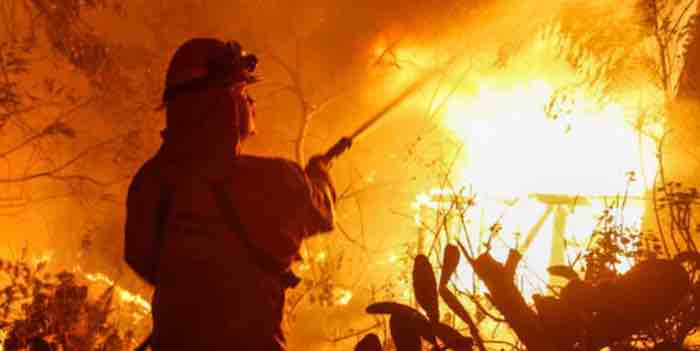 As huge wildfires continued to devour forests, homes, and businesses across California over the weekend, President Trump lashed out at the destructive, deadly policies long pushed by environmentalists that set the stage for the Golden State’s now-routine fiery catastrophes.

“There is no reason for these massive, deadly and costly forest fires in California except that forest management is so poor,” President Trump tweeted Nov. 10 at 3:08 a.m. “Billions of dollars are given each year, with so many lives lost, all because of gross mismanagement of the forests. Remedy now, or no more Fed payments!”

On Nov. 11 at 4:40 a.m. he followed up with: “With proper Forest Management, we can stop the devastation constantly going on in California. Get Smart!”

In-between the two tweets, Trump used Twitter to urge people in the affected areas to “evacuate quickly,” praised the “[m]ore than 4,000” who are fighting the Camp and Woolsey Fires in California, and to express sympathy for the fire victims.

Idiot celebrities and clueless politicians weighed in across the fruited plain, eager to attack Trump.

“This is an absolutely heartless response,” singer Katy Perry naively tweeted. “There aren’t even politics involved. Just good American families losing their homes as you tweet, evacuating into shelters.”

“Lives have been lost. Entire towns have been burned to the ground. Cars abandoned on the side of the road. People are being forced to flee their homes. This is not a time for partisanship. This is a time for coordinating relief and response and lifting those in need up.”

“I don’t think it’s appropriate to threaten funding. That’s not going to happen. Funding will be available. It always is available to our people wherever they are, whatever disaster they are facing. I do think, though, this year we came up with a strong bipartisan success in fixing the wildfire funding issue that had kind of paralyzed our ability to go out and fight fires and suppress fires and mitigate next year’s forest fires.”

But as usual Trump is right –at least in a big-picture way— and his critics are wrong.

“As a result, timber industry employment gradually collapsed, falling in 2017 to half of what it was 20 years earlier, with imports from Canada, China, and other nations filling domestic need,” Chuck DeVore, Vice President of National Initiatives at the Texas Public Policy Foundation, writes at Forbes.

Back in 2005 experts were predicting “larger, more devastating fires

With all that kindling piling up on forest floors, today’s devastating wildfires were not hard to foresee.

Back in 2005 experts were predicting “larger, more devastating fires—fires so hot that they sterilized the soil, making regrowth difficult and altering the landscape,” DeVore writes. They saw the rise of “fires that increasingly threatened lives and homes as they became hotter and more difficult to bring under control.”

“Federal lands have not been managed for decades, threatening adjacent private forests, while federal funds designated for forest maintenance have been “borrowed” for fire suppression expenses,” DeVore writes. “The policies frequently reduce the economic value of the forest to zero. And, with no intrinsic worth remaining, interest in maintaining the forest declined, and with it, resources to reduce the fuel load.”

Two decades ago there used to be an orderly burning of wood waste –including brush and smaller trees cleared by thinning efforts— from timber operations, DeVore adds. That waste fed “renewable biomass powered electric generating plants across the length of the state,” but taxpayer-subsidized solar power coupled with California’s air-quality regulations and less wood waste to use forced biomass generators to shut down.

“What used to be burned safely in power generators is now burned in catastrophic fires,” he writes. “Including the growing capture and use of landfill methane as a fuel, California’s biomass energy generation last year was 22% lower than it was 25 years before.

“Blue check marks:  please take a deep breath and read up on California’s forest management issues that are decades in the making. Governor Brown blames climate change for wildfires and avoids any meaningful conversation on policy solutions.”

Although in his tweets President Trump seem to be blaming California authorities for the fires, arms of the federal government which have long been under the influence of the same left-wing enviro-radicals who run California, are largely to blame.

“Private owners cannot afford to let their forests die of disease, insect infestations or wildfire,” Smith said. “They are on the job 24 hours a day, unlike 9-5 government bureaucrats. If private owners fail they go bankrupt. If Forest Service managers fail, at worst they are transferred to another forest.”

Radical environmentalists for preventing the Forest Service from managing woodlands

“In total, the U.S. government owns about 640 million acres of land, predominantly in the drought-riddled western states,” according to a Fox News summary. “Some 85 percent of Nevada; 70 percent of Alaska and roughly half of Arizona, California and Utah are federal lands.”

Smith laid some of the blame at the feet of radical environmentalists for preventing the Forest Service from managing woodlands by taking away the old or dead trees that are most likely to catch fire. The government’s refusal to open roadways in forested areas also makes fighting fires unnecessarily difficult, according to critics.

Although some may have found President Trump’s tweets about the poor quality of forest management in California jarring or ill-timed, that doesn’t change the fact that the evidence is on his side.

Trackback URL for this entry: https://kickthemallout.com/trackback.php/Why_Trump_Is_Right_On_California_Wildfires