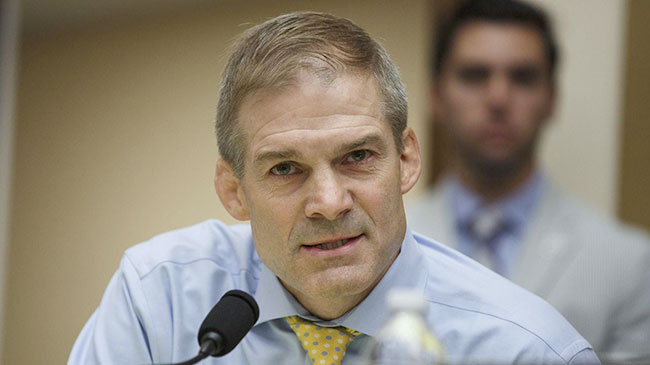 Rep. Jim Jordan (R-Ohio) explained the pivotal piece of the puzzle about the origins of the Russian investigation that was revealed by Peter Strzok in his testimony before Congress Thursday.

Jordan explained that the justification of the Russian investigation came from flawed documents including the “Trump dossier” that was created through the efforts of Democrat-linked entities like Fusion GPS.

“Today, think about that, the top DOJ official Bruce Ohr actually hands parts of the dossier to the FBI,” Rep. Jordan told Sean Hannity on his show Thursday.

“And remember Bruce Ohr’s wife Nellie worked for Fusion GPS, who was paid by the Clinton campaign to put this entire dossier together,” he explained. “This is the first time to my knowledge the FBI has admitted they got parts of the dossier from Bruce Ohr, a fellow DOJ employee.”

“Bruce Ohr, the fourth ranking official at the Department of Justice, his wife works for Fusion GPS, in the summer, he gets information, passes it to the FBI, that becomes the basis to spy on the Trump campaign, plain and simple,” Jordan continued. “This is the first time to my knowledge the FBI has admitted that, and it was good that we got some of that information out today.”

“I’ll tell you what, this investigation started flawed with the dossier,” he concluded.

Watch the interview with Jim Jordan by Sean Hannity:

Strzok’s admission helps substantiate the Republican narrative that special counsel Robert Mueller’s investigation into Russian election interference and alleged collusion with the Trump campaign was flawed from the beginning and politically motivated.

Strzok attempted to defend the anti-Trump texts he sent to his paramour Lisa Page on an official FBI phone during his testimony by saying that they did not reflect any bias he had in his professional capacity as an FBI investigator.

Trackback URL for this entry: https://kickthemallout.com/trackback.php/V-That_Is_Scary-Jim_Jordan_Explains_Explosive_Revelations_From_Peter_Strzok_Testimony