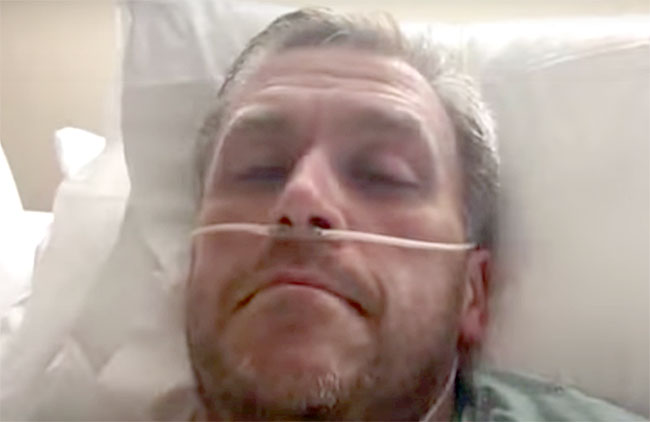 NBC medical expert Dr. Joseph Fair who appeared on NBC nearly a dozen times claiming he had the coronavirus, has now come out to say that he never had the virus in the first place.

"After believing he had the coronavirus in spite of getting negative tests, virologist and NBC News science contributor Dr. Joseph Fair tweeted Tuesday that he had tested negative for the antibodies and that the illness that hospitalized him in May "remains an undiagnosed mystery." Steve Krakauer reported on the developments for his Fourth Watch newsletter," reports the Free Beacon.

"My undiagnosed/suspected COVID illness from nearly 2 months ago remains an undiagnosed mystery as a recent antibody test was negative," Fair tweeted. "I had myriad COVID symptoms, was hospitalized in a COVID ward & treated for COVID-related co-morbidities, despite testing negative by nasal swab."

"I was severely ill for 2 weeks, 4 days of it in critical condition, resulting in pneumonia, diffuse lung injury & 18lbs of weight loss," he continued. "My path forward is a 2nd AB test, & follow-up with a pulmonologist & tropical medicine specialist in an effort to diagnose what made me so ill."

It now seems that Fair was attempting to fear monger the American people considering he had multiple interviews from his hospital bed and claimed that he contracted the coronavirus through his eyes.

Fair appeared on Today from a New Orleans hospital bed in May 14, where he speculated he got the virus through his eyes while on a packed flight two weeks earlier. This happened, he said, despite taking precautions like wearing a mask and gloves.

Today host Hoda Kotb noted during the interview that Fair had received four negative tests for the virus but said, "clearly you have it." Fellow host Craig Melvin called Fair's "false negative" tests "scary," and cohost Savannah Guthrie called it a "cautionary tale."

Fair speculated his tests came back negative because he delayed going to the hospital for more than week when he first felt ill, and he said his doctors felt he must have the virus.

"I was a very healthy person. I exercise five to six days a week," he said. "If it can take even me down, it can take anybody down."

WATCH the clip below:

He was featured that night on NBC Nightly News, where he encouraged citizens to wear protective eyewear in addition to a facemask.

On May 18, Fair appeared on Deadline: White House alongwith a chyron reading, "Breaking News: NBC News Contributor Updates On His Battle With COVID-19." He said he felt increasingly sick from flu-like symptoms and eventually called an ambulance. His breathing grew so constricted, he said, that he had a panic attack.

On June 14, he appeared on Meet the Press to discuss his recovery, where Fair said it was the "worst I've ever felt."

NBC News still has an uncorrected story on its website from May 14 with the headline, "Virologist hospitalized with coronavirus believes he got it through his eyes."

Trackback URL for this entry: https://kickthemallout.com/trackback.php/V-NBC_Doctor_Who_Appeared_on_Air_with_Coronavirus_Never_Had_Coronavirus_in_the_First_Place