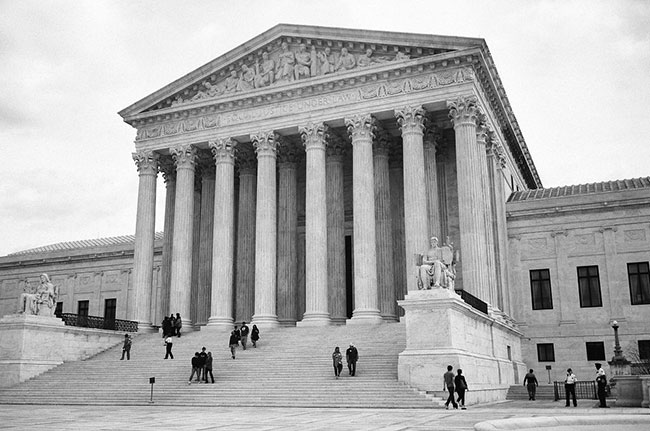 Justice Neil Gorsuch issued a concurring opinion about the threat nationwide injunctions present to separation of powers and the role of the courts under the Constitution.

According to the Immigration and Nationality Act (NIA), foreign nationals are prohibited from acquiring a green card if they are “likely at any time to become a public charge.” The issue at hand on Monday was what fit the criteria of a “public charge.” In recent years, the phrase was characterized as an individual who was reliant on a cash assistance program.

Back in August 2019, the Trump administration implemented this new rule to take into account immigrants’ use of government benefits, such as Medicaid and food stamps, when determining whether to provide individuals with permanent status. The policy exempts refugees and asylum seekers.

In Monday’s ruling, Justice Neil Gorsuch issued a concurring opinion about the threat nationwide injunctions present to separation of powers and the role of the courts under Article III of the U.S. Constitution. “The real problem here is the increasingly common practice of trial courts ordering relief that transcends the cases before them,” Gorsuch wrote. “Whether framed as injunctions of ‘nationwide,’ ‘universal,’ or ‘cosmic’ scope, these orders share the same basic flaw—they direct how the defendant must act toward persons who are not parties to the case.”

Gorsuch continued, “But when a court goes further than that, ordering the government to take (or not take) some action with respect to those who are strangers to the suit, it is hard to see how the court could still be acting in the judicial role of resolving cases and controversies.” Gorsuch was joined in his concurrence by Justice Clarence Thomas.

This isn’t the first-time SCOTUS justices have discussed nationwide injunctions. Back in 2018, in the case Trump v. Hawaii, Justice Thomas noted that nationwide injunctions “are legally and historically dubious,” and warned that “If federal courts continue to issue them, this Court is dutybound to adjudicate their authority to do so.”

Rather than interpret the law as written, leftist judges have become activists in the courtroom, ruling out of political opinions rather than the legal text before them. Such behavior rejects the ideals of the Founders, who believed in an impartial judiciary that rules based on the law as written.

Nationwide injunctions by lower federal courts have become a recurring problem for the Trump administration. In an op-ed in the Wall Street Journal in September 2019, Attorney General Bill Barr revealed that “During the eight years of the Obama administration, 20 nationwide injunctions were issued while the Trump administration has already faced nearly 40,” with the vast majority of these injunctions coming from Democrat-appointed judges. Barr stated “the federal judiciary wasn’t made to produce instant legal uniformity. To the contrary, the system—in which local district courts are supervised by regional courts of appeal—was constructed to allow a diversity of initial rulings until a single, national rule could be decided by the Supreme Court.”

This continuous abuse of judicial power by leftists on the bench erodes our Constitution, piece by piece. President Thomas Jefferson even warned of the judiciary’s potential corruption in 1819, when in a letter to Judge Spencer Roane he wrote, “Our Constitution . . . intending to establish three departments, co-ordinate and independent that they might check and balance one another, it has given—according to this opinion to one of them alone the right to prescribe rules for the government of others; and to that one, too, which is unelected by and independent of the nation. . . . The Constitution, on this hypothesis, is a mere thing of wax in the hands of the judiciary, which they may twist and shape into any form they please.”

This was one of many times Jefferson wrote about potential judicial tyranny, and it seems that his worst fears have come true.

If the Supreme Court doesn’t limit nationwide injunctions, the lower federal courts will continue to run roughshod over our Constitution, deeply damaging the separation of powers that prevents judicial tyranny. The longer this problem persists, activist judges will continue to become emboldened to dictate national policy, while seizing power for the judiciary. It’s time the Supreme Court take a stand and defend the Constitution, and that starts with ending nationwide injunctions.

Shawn Fleetwood is a college student attending Germanna Community College in Virginia. After he gets his associate’s degree, he plans to transfer to a four-year institution to major in either journalism or political science.
Rating: 0.00/5 (0 votes cast)

Trackback URL for this entry: https://kickthemallout.com/trackback.php/Supreme_Court_Justices_Signal_Potential_Crackdown_on_Nationwide_Injunctions