Editor's Note: They have corrupted every single institution we thought we could rely on, including medical journals like The Lancet.  Now they are nothing but pure propaganda arms for Big Pharma and CANNOT BE TRUSTED!

The cover-up started early and ran hard for months. Those who were supposed to be working to protect the American people from the pandemic had only one concern: Covering their butts. The list of people complicit in the cover-up continues to grow. That list includes Dr. Anthony Fauci, as we learned so vividly yesterday. And the person who was running much of the cover-up operations in public and behind the scenes was none other than EcoHealth Alliance President Peter Daszak.

Scott Hounsell published a blockbuster investigative report at Red State revealing how Daszak worked to use The Lancet as a propaganda publication to cover-up malfeasance and corruption. The Lancet’s articles were tools for protecting both the Chinese Communist Party and the American parties that participated in the gain-of-function research that yielded Covid-19. At every turn, from blaming bat soup to trashing treatments like Hydroxychloroquine and Ivermectin, The Lancet was the primary mouthpiece for “scientists” to point people in the wrong direction.

The Red State article puts all of the pieces together, connecting the dots with nearly all of them centered around Daszak. With what we know now about Fauci’s desire to keep his participation with the Wuhan Virology Lab under the radar as well as Daszak’s ludicrous “debunking” of the Wuhan Lab Theory during the World Health Organization’s fake investigation, it appears that the cover-up was the top priority as soon as it became clear to them that Covid-19 was manufactured.

In other words, they knew they participated in creating the emerging pandemic around the beginning of 2020, long before most Americans even knew there was a problem brewing.

According to the article:

So who are the scientists who signed this letter?  Numerous experts in the field from across the world have one thing in common:  All roads run through Peter Daszak.  Daszak, as you may remember, is the President of EcoHealth Alliance, and how NIH grants were funneled to the Wuhan Institute of Virology and Dr. Shi Zhengli. Daszak himself teamed up with Dr. Shi on gain-of-function research studies that created mutated coronavirus versions and then tested those viral strains on animal and human cells.  Daszak, who also signed the Lancet letter, has every reason in the world to want to eradicate the lab-leak theory, ultimately because his rear end may be in the sling if it is revealed to be from there.

In my research, I came across a trove of emails from the University of Colorado and the University of Maryland that shows exactly how this letter came to be and that the final words of the piece “we declare no competing interests,” were absolute hogwash.

To start, of the letter’s 27 signatories, 5 of them are either employees or board members of EcoHealth Alliance.  Rita Cowell, Peter Daszak, Hume Field, John B. Hughes, and William Karesh, all work directly for or with EcoHealth Alliance.  Hardly impartiality or a lack of a conflict or competing interest.

n an email chain commencing February 10th, 2020, Peter Daszak began soliciting signers to the above letter.  The knowledge about the virus was still in its infancy, but one thing was guaranteed for Daszak and his pals at the EcoHealth Alliance:  This virus did not come from the WIV. 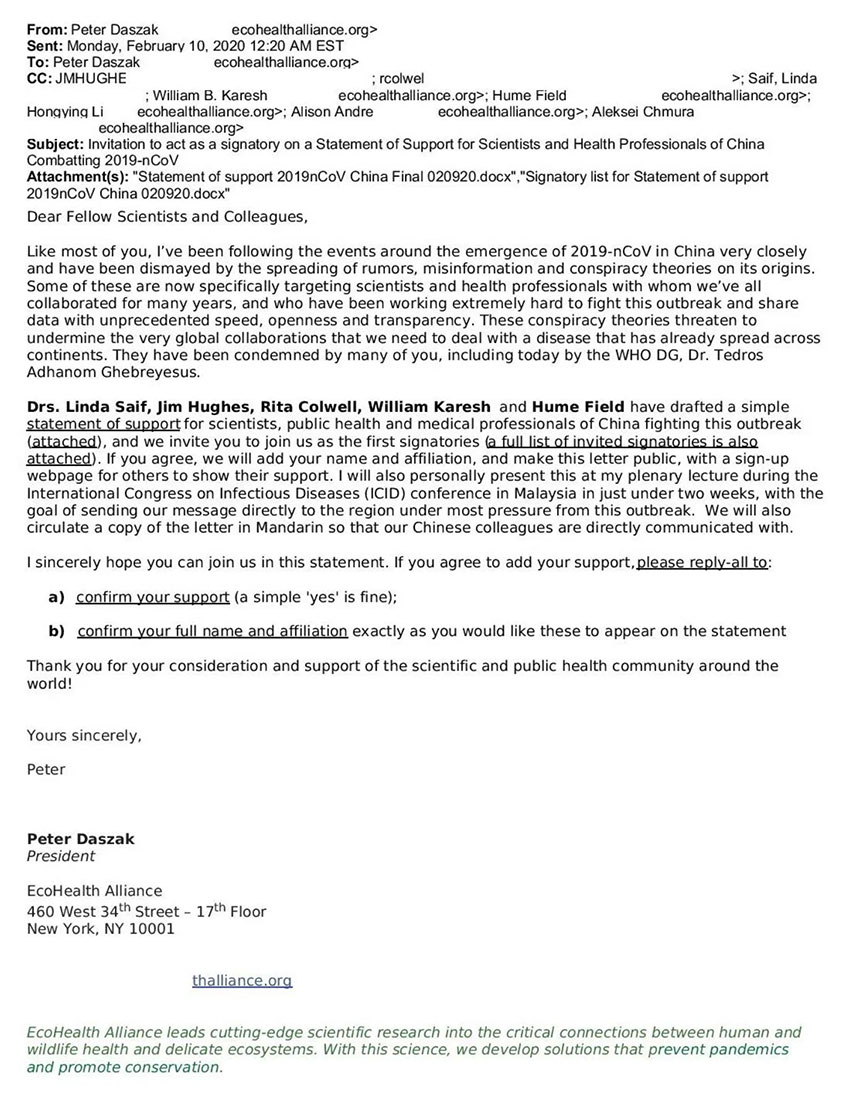 “conspiracy theories” and suggests that the WHO Director-General Tedros Ghebreyesus completely supported the natural mutation theory.  As we have pointed out, there has already been a conflict of interest for at least 5 of the signatories, but is there more?

There are those who will instantly label this as a “conspiracy theory,” and while I do not believe such a label should be considered a pejorative, let’s address it with logic. We know that Fauci and Daszak have adored gain-of-function for years. We know their organizations funded the Wuhan Virology Lab. We know based on yesterday’s emails they believed it was likely the rising pandemic came from the lab. Knowing these things, is it really a stretch to believe they were doing everything within their power to push the zoonotic origin theory and cover-up all their connections to the actual source of the coronavirus?

What are the implications? Let’s assume that this cover-up is criminal. It would appear to be so prima facie. If they had insight into the creation of the coronavirus but misled the masses into believing it was from bat soup, how much effort was wasted pursuing their disinformation?

Could that effort have been directed towards preventing the spread of the virus or promoting treatments like Hydroxychloroquine and Ivermectin? Yes. If we had been told the truth from the start, could the Trump administration have operated from a completely different stance and done more to save lives? Yes.

It is crystal clear that Fauci and Daszak knew more than they were telling us from the beginning. Daszak was even involved in creating a coronavirus in 2016, according to Red State’s Hounsell in a separate article. If the Department of Justice honestly investigates this, it seems possible, perhaps even likely, that they will learn that Fauci and Daszak weren’t just covering up their associations. They could be covering up their direct involvement in creating Covid-19 itself.

This verifiable conspiracy was worse than just a few people covering their tracks. There is no telling how many people died as a result of Anthony Fauci and Peter Daszak withholding crucial information. Investigate these criminals now, DoJ.

Trackback URL for this entry: https://kickthemallout.com/trackback.php/Lancet_Infamous_Covid_Disinformation_Campaign_Was_Orchistrated_By_Faucis_Buddy_Peter_Daszak