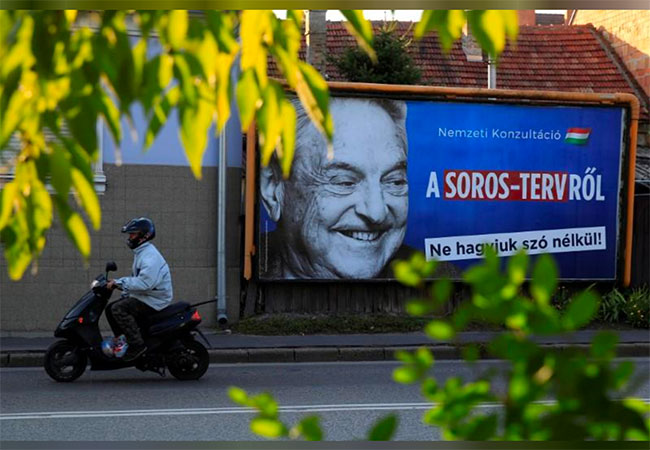 FILE PHOTO: A man rides his moped past a government billboard displaying George Soros in monochrome
next to a message urging Hungarians to take part in a national consultation about what it calls a plan by the Hungarian-born financier
to settle a million migrants in Europe per year, in Szolnok, Hungary, October 2, 2017. REUTERS/Bernadett Szabo

BUDAPEST (Reuters) - Hungary’s nationalist government outlined legislation on Wednesday to tackle illegal immigration that it says is undermining European stability and has been stoked in part by U.S. financier George Soros.

Right-wing Prime Minister Viktor Orban is embroiled in an escalating feud with Soros, who has rejected an extended Hungarian government campaign against him as “distortions and lies” meant to create a false external enemy.

Orban is expected to secure a third straight term in a general election due on April 8.

Kovacs told a news conference that a 25 percent tax would be imposed on foreign donations that such NGOs collect, and activists could face restraining orders that preclude them from approaching the EU’s external borders in Hungary. Those borders have been fortified since a migrant influx in 2015.

Kovacs added that third-country nationals could also be subject to a restraining order anywhere in the country.

Details were not immediately clear as the bills will only be published and submitted for public debate on Thursday.

But pro-government media reported that the bills could lead to a ban on Soros, who has U.S. and Hungarian citizenship, entering the country.

Soros, 87, is a Hungarian-born Jew whose longtime support for liberal and open-border values in eastern Europe have put him at odds with right-wing nationalists, especially in Hungary.

Orban’s government said in its position paper that it opposed migration through “every means possible.”

“Illegal mass immigration is a problem that affects Europe as a whole, posing serious security risks,” it said.

Asked about implications for Soros himself, Kovacs said: “If Soros is found to have engaged in such activity, meaning he organizes illegal immigration, then the rules will apply to him.” An aide for Kovacs declined to elaborate.

Last year, the Orban government introduced a measure requiring NGOs that get money from abroad to register with the state, raising alarm in the European Union and United States.

The European Commission said late last year it was taking Budapest to the EU’s top court over its NGO laws as well as a higher education law that targets Central European University in Budapest founded by Soros.

Orban is locked in a series of running battles with the EU, where Western member states and the Brussels-based executive Commission decry what they see as his authoritarian leanings, the squeezing of the opposition and the free media.

Trackback URL for this entry: https://kickthemallout.com/trackback.php/Hungary_Outlines_Stop_Soros_Legislation_Against_Immigration