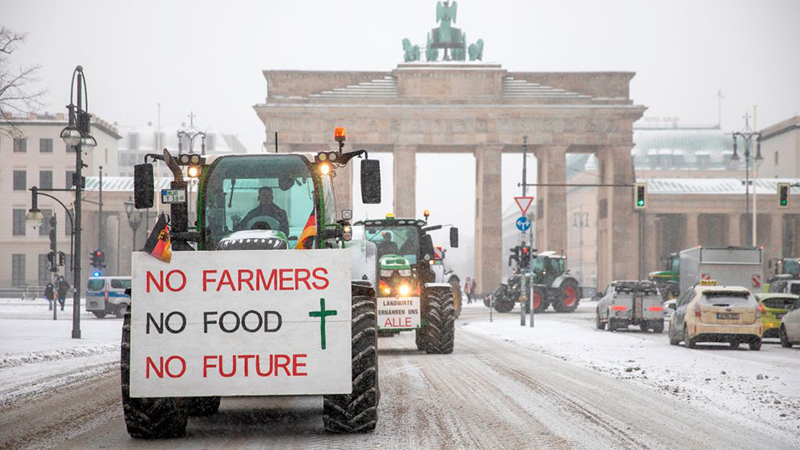 Germany has banned farmers in one of its federal states from properly fertilising large swathes of land at the behest of the EU’s green agenda.

As of Thursday, the use of nitrate fertilisers has been greatly restricted for large swathes of farmland in North Rhine-Westphalia, with the green agenda change greatly angering farmers as it is likely to drastically reduce yields.

While implemented by authorities in Germany, the ban is ultimately at the behest of the European Union, which is pushing to reduce the amount of nitrogen in certain parts of Europe as part of its green agenda.

The policy has already wreaked havoc in the Netherlands, with the Dutch government now looking to either buy out or forcibly close up to 3,000 farms to meet targets set by Brussels.

Despite the impact this could have on food security in Europe, the push appears to have firmly extended itself into Germany, with Bild reporting that farmers will now be forced to use 20 per cent less fertiliser in any area deemed to have problematic levels of the chemical.

Overall, the publication claims that a third of the total usable farmland in North Rhine-Westphalia — Germany’s most populous state — falls under this new restriction.

“If a wheat field needs 200 kilos of fertilizer for optimal yield, farmers would now be forced to use 40 kilos less,” one local farmer, Erich Gussen, explained. “That means a drop in yield and the quality of the wheat will suffer!”

Gussen noted that there is “great indignation” amongst farmers in the state, many of whom will see their bottom lines severely suffer at a time when fertiliser and fuel prices are already at major highs.

“Our government doesn’t cater to the wishes of its own citizens, it caters to globalist institutions whose interest it is to control the food supply, so they can control us.”

With the European Union reportedly threatening to fine Germany if it does not act to reduce nitrogen levels, other federal states in the country will also soon be forced to act to reduce farmers’ fertiliser usage.

Such a move could detrimentally affect the country’s food production at a time when food insecurity is growing worldwide as a result of the ongoing war in Ukraine, which has seen the global supply of wheat and other grains contract.

Despite this, the EU appears to be pushing ahead with its great reset goals, with the Dutch government now threatening to shutter up to 3,000 farms in their country in service of their overlords in Brussels.

Farmers in the member state have been actively resisting the measures with countless protests which have seen motorways blockaded and events disrupted, though such demonstrations have so far been unable to curb the government’s enthusiasm for closures.

“What this shows you is that the will of the people means nothing to our government,” political commentator Eva Vlaardingerbroek told Breitbart. “Despite all of the protest and (inter)national backlash, they’re pushing through with what I think are criminal policies.”

“Our government doesn’t cater to the wishes of its own citizens, it caters to globalist institutions whose interest it is to control the food supply, so they can control us,” she continued. “It’s the great reset in full force.”

Trackback URL for this entry: https://kickthemallout.com/trackback.php/Great_Reseet-Germany_Bans_Farmers_From_Property_Fertilising_Land_to_Serve_EU_Green_Agenda