Editor's Note:
I don't think President Trump would ever sign a bill like this even if it passed but this shows you precisely why we need to clean house in Congress ASAP.  They are the worst kind of snakes. 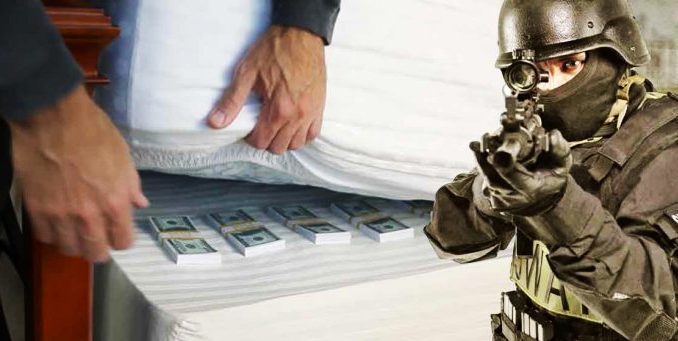 Congress submits bill making it illegal to hold cash, Bitcoin, or other assets outside of a bank without informing them in writing

Just as the War on Drugs was never actually about slowing down or stopping the import and use of illegal narcotics, so too was the spurious War on Terror not about stopping individuals or groups from inciting violence for political means.  In fact, we already know that U.S. agencies have funded, trained, and armed the very terror groups that are supposedly on the FBI’s Terror Watch List when they supported them in the taking over of Libya, and in the attemp to take over Syria.

So the question then has to be asked… what are the purposes behind the ideological wars against drugs and terror really all about?  Well, since the real victims going back to the 1970’s when the War on Drugs was instituted by President Richard Nixon have been the millions of Americans incarcerated for victimless crimes, and the billions of dollars seized without a trial in what is known as Civil Forfeiture, then it is fairly obvious who these wars were really focused against.

And since the advent of the Patriot Act, which hasn’t stopped a single terrorist or terror event following the terror attacks on 9/11, the ability of Americans to do as they please with their own money has been stymied in the government’s attempt to monitor and regulate every single transaction individuals choose to conduct.

However, with the rise of cryptocurrencies, and the new fears coming out that decentralized virtual money could actually start or magnify a financial crisis, Congress on May 25 has submitted a bill making it illegal, and placing individuals subject to asset confiscation and imprisonment, for anyone to have a medium size amount of cash, Bitcoin, etc… outside of a bank without telling the government how much you have, where you have it, and why you have it through the filling out of new Federal forms.

Recently a new bill was introduced on the floor of the US Senate entitled, pleasantly,

“Combating Money Laundering, Terrorist Financing, and Counterfeiting Act of 2017.” You can probably already guess its contents. Cash is evil. Bitcoin is evil. Now they’ve gone so far to include prepaid mobile phones, retail gift vouchers, or even electronic coupons.

Evil, evil, and evil. Among the bill’s sweeping provisions, the government aims to greatly extend its authority to seize your assets through “Civil Asset Forfeiture”.

Civil Asset Forfeiture rules allow the government to take whatever they want from you, without a trial or any due process. This new bill adds a laundry list of offenses for which they can legally seize your assets… all of which pertain to money laundering and other financial crimes.

Here’s the thing, though: they’ve also vastly expanded on the definition of such ‘financial crimes’, including failure to fill out a form if you happen to be transporting more than $10,000 worth of ‘monetary instruments’.

Have too much cash? You’d better tell the government.

If not, they’re authorizing themselves in this bill to seize not just the money you didn’t report, but ALL of your assets and bank accounts. They even go so far as to specifically name “safety deposit boxes” among the various assets that they can seize if you don’t fill out the form.

Trackback URL for this entry: https://kickthemallout.com/trackback.php/Congree_To_Force_Citizens_To_Register_Cash