Editor’s Commentary: When Daniel Horowitz over at The Blaze posted an article last month about Uttar Pradesh in India and their success with Ivermectin, I was dumb enough to assume mainstream media would be forced to report on it as well. The Blaze has a strong audience and the story was compelling. Certainly, corporate media couldn’t sweep this one under the rug, right?

Like I said, I was dumb. Nobody in the Mainstream Media Industrial Complex picked it up. Literally zero. What shocked me was that very few in conservative media picked it up, either. That’s arguable more distressing. Since then, I’ve realized “conservative” news outlets that rely on Google, Facebook, Twitter, or any of the other Big Tech sugar daddies refuse to talk about Ivermectin, adverse reactions to vaccines, or any topics that could get them blacklisted.

Ivermectin is cheap as dirt. Big Pharma cannot cash in on the science so they are forced to cash in on ignorance.

The story is a bombshell and since Horowitz wrote it, the numbers have trended even better to prove the efficacy of Ivermectin as a treatment and even preventative against Covid-19.

Uttar Pradesh is a huge state in India with a population well over 200 million. With all residents included, it’s nearly 3/4ths the size of the entire United States. In an area so densely populated, one would almost certainly believe their hospitals are overrun with Covid-19 patients. Nope. As of September 13, 2021, they had 175 active cases.

It bears repeating, in case someone is reading too fast. With over 200 million people in the state of Uttar Pradesh, there are currently under 200 total active cases of Covid-19. 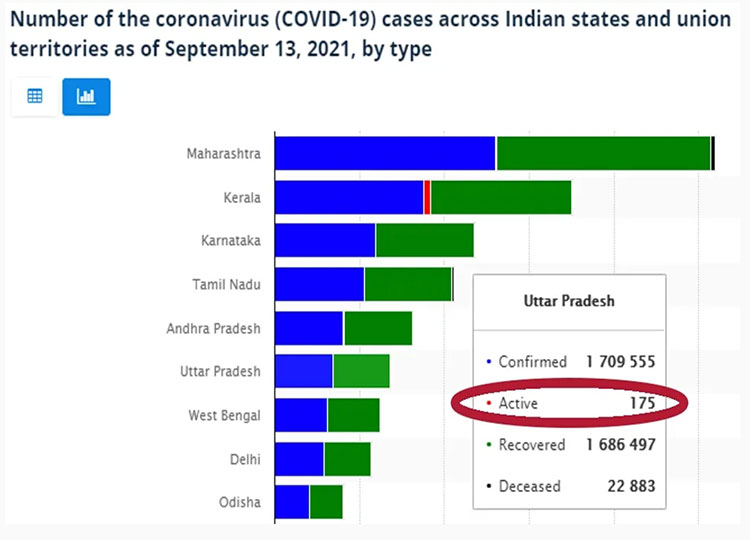 What’s their secret? Ivermectin. They distribute it to everyone for free. And as is clear by the numbers, it’s not like they never had a problem. They’ve had over 1.7 million confirmed cases. But the vast majority of their 22,883 recorded deaths came before they had distributed Ivermectin to nearly everyone in the state. Once Ivermectin usage became practically universal, their numbers started plummeting.

Another interesting note is that the vaccination rate in the state is around 15%. This drives a stake into the heart of the vaxx-nannies who claim that only by getting jabbed and supporting Big Pharma can anyone expect to survive the pandemic. Ivermectin is cheap as dirt. Big Pharma cannot cash in on the science so they are forced to cash in on ignorance.

The Covid kit that India passed out to its citizens that included Zinc, Doxycycline, and I***mectin costs $2.65....

There's a reason they don't want you getting preventative medicine.. There's no money in it..

For those who may be thinking this is about the spread in India itself, let’s look at Maharashtra. About half the population of Uttar Pradesh, the state of Maharashtra had 49,880 active cases at the same time that Uttar Pradesh had 175. They do not actively distribute or prescribe Ivermectin.

Ethan Huff from Natural News goes into more details below. As you read it, keep in mind that this information has been completely suppressed by our government, mainstream media, Big Tech, and academia at the behest of Big Pharma. Remember that when you face the vaxx-nannies online or in person. They just haven’t been told the truth, or have been unwilling to hear it. Here’s Ethan…

Uttar Pradesh, one of India’s most densely populated regions, is doing exceptionally well with the Wuhan coronavirus (Covid-19) “cases.” The reason why? Ivermectin is widely used there.

With a population of 240 million people, which is about 75 percent of the total United States population, Uttar Pradesh has had only about 24 cases of the Chinese Virus and no deaths over the past several months. This is astounding compared to what is happening throughout the West.

Among India’s 36 states, Uttar Pradesh boasts being dead last on the list of infected states. Once again, the reason for this is simple: ivermectin is not a dirty word there like it is in the U.S.

“Evidently, the global medical junta doesn’t like the over 60 studies vouching for the efficacy of ivermectin against SARS-CoV-2, especially when used early, but there is something better than a study: pure reality of lived experience,” writes Daniel Horowitz for Blaze Media.

Beginning in late 2020, authorities in Uttar Pradesh began liberally dispensing ivermectin to people, urging them to take it early on at the first signs of a possible infection and even preventatively. This advice turned out to be solid.

“By the end of 2020, Uttar Pradesh – which distributed free ivermectin for home care – had the second-lowest fatality rate in India at 0.26 per 100,000 residents in December. Only the state of Bihar, with 128 million residents, was lower, and it, too, recommends ivermectin,” reported Trial Site News.

Covid is gone from Uttar Pradesh, thanks to ivermectin

For a “horse de-wormer,” ivermectin sure did help Uttar Pradesh avoid a major crisis. Ever since the drug was introduced there, the Fauci Flu has pretty much been eradicated.

Nobody is dying from Chinese Germs there because they are gaining protection from the use of ivermectin, which has repeatedly been shown as effective against the Wuhan Flu.

“Uttar Pradesh likely would have been the first world experiment of what a given area would have looked like had they been taking ivermectin from day one before a wave hit,” Horowitz explains.

“Unfortunately, hundreds of thousands of seasonal migrants fled Mumbai and other big cities when the Delta wave hit and all settled back in their villages in Uttar Pradesh, giving them the same spike that every other state got because those people were not on ivermectin.”

As of now, there has still not been a proper case study using an actual population like this to demonstrate the power of ivermectin to put an end to the plandemic.

This is unfortunate because we could have been long done with this nonsense ages ago, were it not for the corrupt political influence that is keeping ivermectin out of the hands of the people, particularly in the West.

There would be no need for panic, masks, “vaccines,” or any other mindless hysteria if the “authorities” would just give up their crusade against ivermectin and let people try it. Many deaths and hospitalization could be prevented this way.

Tony Fauci and his cronies continue to try to strongarm India into accepting snake oil “remedies” like remdesivir and Donald “father of the vaccine” Trump’s “Operation Warp Speed” injections, but the country, or at least parts of it, have been resisting rather formidably.

“All trials are saying that this drug is not effective in the treatment of COVID-19, rather it is complicating and resulting in mortality of patients,” says Dr. Surya Kant Tripathi about the failure of remdesivir.

“At so many centers, remdesivir trials were stopped. Also, remdesivir is costing minimum of Rs 5,000 per vial.”

The latest news about the Wuhan coronavirus (Covid-19) plandemic can be found at Pandemic.news.

Trackback URL for this entry: https://kickthemallout.com/trackback.php/Astonishing_Success_Rate_of_Ivermectin_in_Indian_State_Shreds_Horse_Dewormer_Propaganda