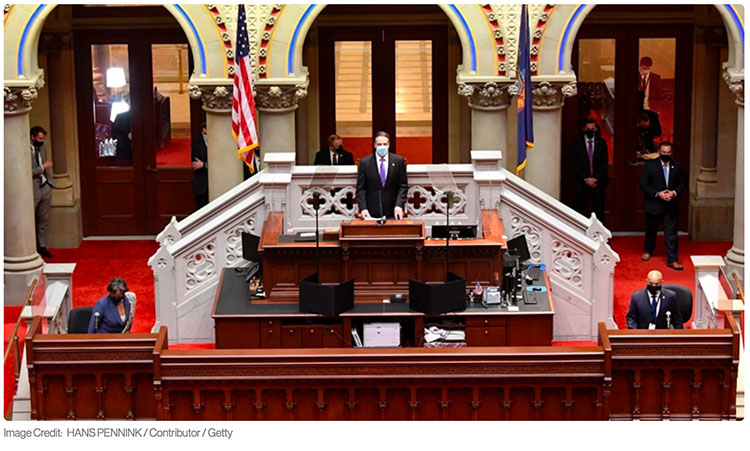 Lawmakers in New York wrote a bill laden with draconian detention measures tailored for a full-blown health crisis back in 2019, long before Covid-19 was considered a threat by anyone.

The bill allows the “removal and detention” of anyone the governor believes to be an “imminent and significant” threat to public health due to them being associated with a communicable disease.

“Upon determining by clear and convincing evidence that the health of others is or may be endangered by a case, contact or carrier, or suspected case, contact or carrier of a contagious disease that, in the opinion of the governor, after consultation with the commissioner, may pose an imminent and significant threat to the public health resulting in severe morbidity or high mortality, the governor or his or her delegee, including, but not limited to the commissioner or the heads of local health departments, may order the removal and/or detention of such a person or of a group of such persons by issuing a single order, identifying such persons either by name or by a reasonably specific description of the individuals or group being detained,” reads Assembly Bill A99 (emphasis ours). “Such person or group of persons shall be detained in a medical facility or other appropriate facility or premises designated by the governor or his or her delegee and complying with subdivision five of this section.”

Written in January 2019, the bill goes on to describe how a detained person should behave.

Also, the language in the bill is very relevant today as politicians across the nation are fomenting hysteria over a new “mutant” super-strain of Covid.

“Just an hour or so ago we were informed that this new [Covid] variant, this new strain that we have identified obviously from the UK and some other parts of the globe, identified in Colorado yesterday has been identified here in the state of California,” said California Governor Gavin Newsom Wednesday.

Newsom is just one of the many Democrat leaders who have supported job-destroying policies that have crushed America’s working-class this year in the name of public safety, despite CDC data indicating the dramatic responses to Covid are overreactions.

“This [bill allows] the detention of anybody and everybody they want whenever they want, by saying you’re sick,” says Bermas.

According to the New York State Senate’s website, the bill’s status is “active” and in the “assembly committee” stage of development.

The final stage of development is the bill being signed or vetoed by the governor.

Trackback URL for this entry: https://kickthemallout.com/trackback.php/2019_New_York_Bill_Pushes_Draconian_Detention_Measures_Long_Before_COVID