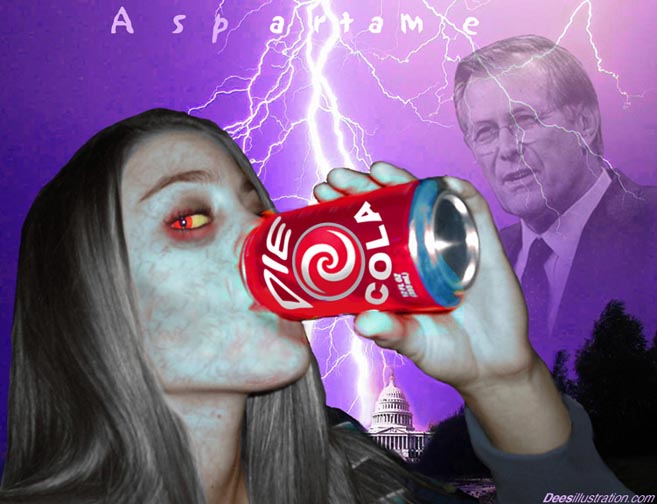 In 1999, The Independent published an article entitled "World's top sweetener is made with GM bacteria," which revealed that Monsanto was knowingly adding aspartame to soft drinks in the United States - and that aspartame is made from GM bacteria. This report, which remains one of the earliest disclosures on aspartame in a mainstream newspaper, received little attention after its publication - possibly because its implications were underestimated at the time - and it has long been forgotten.

Since 1999, the world has become a little more attentive to Monsanto and aspartame, but ignorance still abounds about the latter's genesis. While more and more people are starting to awaken to aspartame's destructive effects on our health, do they know how it is actually made? Fortunately, a 1981 patent for aspartame production, once confined to the drawers of patent offices, is now available online for everyone to see - and it confirms everything that Monsanto was happy to tell us in 1999 before their meteoric growth necessitated greater prudence.

The patent, which is entitled Process for producing aspartame and is credited to Bahl, Rose, and White, summarizes the process as follows:

"The artificial sweetener aspartame, a dipeptide with the formula Asp-Phe-me, is produced using a cloned micrcorganism [sic]. A DNA which codes for a large stable peptide comprised of the repeating amino acid sequence (Asp-Phe)n is inserted into a cloning vehicle which in turn is introduced into a suitable host microorganism. The host microorganism is cultured and the large peptide containing the repeating Asp-Phe sequence is harvested therefrom. The free carboxyl group of the large peptide is benzylated and then hydrolysed to benzyl Asp-Phe dipeptides. This dipeptide is methylated and then debenzylated to form aspartame."

1.) 'Cloned microorganisms' (which the patent later reveals to be genetically modified E. coli) are cultivated in tanks whose environments are tailored to help them thrive.

4.) The feces are then treated. This includes a process of methylation (adding an excess of the toxic alcohol, methanol, to the protected dipeptide).

While common sense dictates that this abomination doesn't belong anywhere near our bodies, the patent's authors made no secret about their belief that aspartame constitutes a safe and nutritious sweetener:

"Aspartame is not only sweeter than sucrose, but is preferable as a food to sucrose. While sucrose can provide the body with little more than energy, aspartame is composed of amino acids, the building blocks of body proteins, and like other proteins is broken down by the digestive enzymes in the stomach to its constituent amino acids thus providing nutritive value. [...] For these reasons, aspartame holds significant promise in replacing sugar as a sweetener."

So there we have it: An official document that not only reveals the shocking truth behind aspartame production, but also freely admits that it was intended for mass consumption as a sucrose substitute. Therefore, the next time someone claims that your reservations about this sweetener are unfounded, direct them to this patent - the truth behind aspartame is now in plain view.

About the author:
Michael Ravensthorpe is an independent writer whose research interests include nutrition, alternative medicine, and bushcraft. He is the creator of the website, Spiritfoods, through which he promotes the world's healthiest foods.

Trackback URL for this entry: http://kickthemallout.com/trackback.php/Patent_Confirms_That_Aspartame_Is_the_Excrement_of_GM_Bateria