The Pedophocracy, Part I:  From Brussels ...

"Paedophiles can boldly and courageously affirm what they choose ... I am also a theologian and as a theologian, I believe it is God's will that there be closeness and intimacy, unity of flesh, between people ... paedophiles can make the assertion that the pursuit of intimacy and love is what they choose. With boldness, they can say, 'I believe this is in fact part of God's will.'"

Ralph Underwager, 'expert' witness for the defense in scores of child abuse cases and former vocal member of the False Memory Syndrome Foundation, in an interview in Paidika (a pro-pedophilia publication), conducted in June 1991

To the vast majority of Americans, the name Marc Dutroux doesn't mean much. Drop that name in Belgium though and you're likely to elicit some very visceral reactions. Dutroux - convicted along with his wife in 1989 for the rape and violent abuse of five young girls, the youngest of whom was just eleven - now stands accused of being a key player in an international child prostitution and pornography ring whose practices included kidnapping, rape, sadistic torture, and murder.

Dutroux was sentenced in 1989 to thirteen years for his crimes, but was freed after having served just three. This was in spite of the fact that, as prison governor Yvan Stuaert would later tell a parliamentary commission: “A medical report described him as a perverse psychopath, an explosive mix. He was an evident danger to society.”

The man who turned Dutroux loose on society, Justice Minister Melchior Wathelet, soon after received a prestigious appointment to serve as a judge at the European Court of Justice at the Hague. Shortly after Dutroux’s release, young girls began to disappear in the vicinity of some of his homes. Though technically unemployed and drawing welfare from the state, he nevertheless owned at least six houses and lived quite lavishly.

His rather lucrative income appears to have been derived from trading in child sex-slaves, child prostitution, and child pornography. Many of his houses appeared to stand vacant, though at least some of them were in fact used as torture and imprisonment centers where kidnapped girls were taken and held in underground dungeons.

Some of Dutroux’s homes were used in this way for several years following his early release, with a growing body of evidence to indicate that fact to the police. True to form though, authorities failed to act on the information, or acted on it in a way that showed either complete incompetence (according to most press reports), or police complicity in the operation (according to any sort of logic).

Police seem to have routinely ignored tips that later proved to be accurate, including a report from Dutroux's own mother that her son was holding girls prisoner in one of his houses. In addition, key facts were withheld from investigators working on the disappearances and lines of communication were unaccountably broken, inexcusably hindering the investigation.

Police did search one of Dutroux's homes on no less than three separate occasions over the course of the investigation. On at least two of those occasions, two of the missing girls were being held in heinous conditions imprisoned in a custom-built dungeon in the basement. Nevertheless, the police searches came up empty, despite the fact that the investigating officers reported “hearing children’s voices on one occasion,” according to the Guardian.

It was not until August 13, 1996, four years after the disappearances began, that authorities arrested Dutroux, along with his wife (an elementary school teacher), a lodger, a policeman, and a man the Guardian described as “an associate with political connections” – elsewhere identified as Michel Lelievre.

Two days later, police again searched Dutroux's home and discovered the soundproof dungeon/torture center. As CNN reported, three years earlier “police ignored tips from an informant who said Dutroux was building secret cellars to hold girls before selling them abroad.” And in 1995, the same informant had told police that Dutroux had offered an unidentified third man “the equivalent of $3,000 to $5,000 to kidnap girls.”

Incredibly, it was later reported by the Guardian that police actually had in their possession a videotape of the dungeon being constructed: “Belgian police could have saved the lives of two children allegedly murdered by the paedophile Marc Dutroux if they had watched a video seized from his home which showed him building their hidden cell.” The tape had been seized in one of the earlier searches.

At the time of the final search, two fourteen-year-old girls were found imprisoned in the dungeon, chained and starving. They described to police being used as child prostitutes and in the production of child pornography videos. More than 300 such videos were taken into custody by the police.

On August 17, the story got grimmer as police dug up the bodies of two eight-year-old girls at another of Dutroux's homes. It would later be learned that the girls had been kept in one of Dutroux’s dungeons for nine months after their abductions, during which time they were repeatedly tortured and sexually assaulted, all captured on videotape. The girls were then left to slowly starve to death. Alongside of their decimated corpses was the body of Bernard Weinstein, a former accomplice of Dutroux who had occupied one of the houses for several years. Weinstein had been buried alive.

A few weeks later, two more girls were found buried under concrete at yet another of the Dutroux properties. By that time, ten people were reportedly in custody in connection to the case. Elsewhere in Belgium, the News Telegraph reported that: “The corpses of two women and parts of a third body have been discovered in a freezer at a Lebanese restaurant in Brussels.”

As the body count mounted, the outrage of the Belgian people grew. They demanded to know why this man, dubbed the 'Belgian Beast,' had been released after having served such an absurdly short sentence. And to know why, as evidence had continued to mount and girls had continued to disappear, the police had chosen to do nothing. How many girls, they demanded to know, had been killed as a result of this inaction?

Adding further fuel to the fire, as a Los Angeles Times report revealed, was that: “a highly regarded children’s activist, Marie-France Botte, claims that the Justice Ministry is sitting on a politically sensitive list of customers of pedophile videotapes.”

The same report noted that: “The affair has become further clouded by the discovery of a motorcycle that reportedly matches the description of one used in the 1991 assassination of prominent Belgian businessman and politician Andre Cools. Michel Bourlet, the head prosecutor on the pedophile case, meanwhile, has publicly declared that the investigation can be thoroughly pursued only without political interference. Several years ago, Bourlet was removed from the highly charged Cools case, which remains unsolved.”

At first glance you may think this is a joke.  But it's no joke.  Sickening . . .  More in-your-face child abuse. 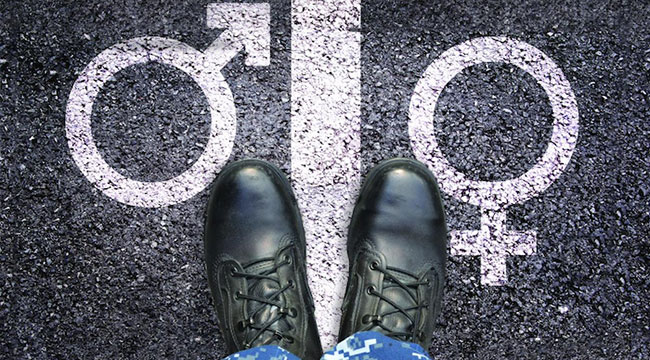 Ryan T. Anderson, the author of ‘When Harry Became Sally: Responding to the Transgender Moment’, gave a speech last week at Catholic University of America.

It was all very dignified and featured a walking–on–eggshells atmosphere. Yet under Anderson’s proper and decorous message was a stark warning for parents: Gender Red Guards are seizing the curriculum in government schools and they are coming for your kids.

Or as Anderson has tweeted, “transgenderism is a belief system that increasingly looks like a cultish religion…being forced on the public by the state.”

“Today the focus [of transgenderism] tends to be on children,” Anderson warns. There are already 45 clinics that specialize in children and essentially function as recruitment depots.

“The standard of care is self–reinforcing” in a children’s gender jumble clinic. These clinics make sure that once a child has expressed even the most tentative misgivings regarding their “assigned gender” the staff makes sure there is no backsliding on the part of the child or the parents.

Left to their own devices 80 to 95 percent of the boys and girls who are gender–confused will happily revert to their gender before they become adults. Transgenderists can’t tolerate that level of attrition. A movement to normalize the abnormal can’t succeed if the numbers remain just a miniscule fringe of the total population.

These children’s clinics are a sexual Checkpoint Charlie. Once the child crosses over he’s behind the Berlin Gender Wall, never to be allowed to return.

The same tactics used to successfully push the gay marriage agenda are now being used to push paedophilia. We can't let that happen.

A secret document which sets out a procedure for dealing with child sex abuse scandals within the Catholic Church is examined by Panorama. Crimen Sollicitationis was enforced for 20 years by Cardinal Joseph Ratzinger before he became the Pope. It instructs bishops on how to deal with allegations of child abuse against priests and has been seen by few outsiders. Critics say the document has been used to evade prosecution for sex crimes. It instructs them how to deal with priests who solicit sex from the confessional. It also deals with "any obscene external act ... with youths of either sex." It imposes an oath of secrecy on the child victim, the priest dealing with the allegation and any witnesses. Breaking that oath means excommunication from the Catholic Church. Reporting for Panorama, Colm O'Gorman finds seven priests with child abuse allegations made against them living in and around the Vatican City.

One of the priests, Father Joseph Henn, has been indicted on 13 molestation charges brought by a grand jury in the United States. During filming for Sex Crimes and the Vatican, Colm finds Father Henn is fighting extradition orders from inside the headquarters of this religious order in the Vatican. The Vatican has not compelled him to return to America to face the charges against him. After filming, Father Henn lost his fight against extradition but fled the headquarters and is believed to be hiding in Italy while there is an international warrant for his arrest.

Colm O'Gorman was raped by a Catholic priest in the diocese of Ferns in County Wexford in Ireland when he was 14 years old. Father Fortune was charged with 66 counts of sexual, indecent assault and another serious sexual offense relating to eight boys but he committed suicide on the eve of his trial. Colm started an investigation with the BBC in March 2002 which led to the resignation of Dr Brendan Comiskey, the bishop leading the Ferns Diocese. Colm then pushed for a government inquiry which led to the Ferns Report. It was published in October 2005 and found: "A culture of secrecy and fear of scandal that led bishops to place the interests of the Catholic Church ahead of the safety of children."