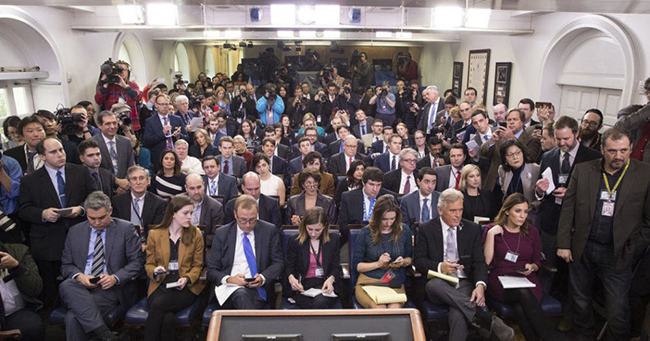 In threatening to deny White House access to news organs peddling “fake news,” President Trump has been accused of launching a full-court press against the press. But, ironically, the notion that such an action constitutes an attack on media freedom is itself an example of fake news.

The Daily Mail reports on the story:

President Donald Trump suggested Wednesday that he might revoke White House credentials for some journalists, following the publication of a survey that showed a dramatic leftward tilt in television news coverage about him.

The Media Research Center, a conservative watchdog group, tracked the evening newscasts on ABC, CBS and NBC for the first four months of this year and found more than 1,600 ‘explicitly positive and negative’ statements about the president.

The group determined that nine out of 10 of those broadcast statements were negative. It did not include CNN and MSNBC in its research.

Trump vented, saying: “The Fake News is working overtime. Just reported that, despite the tremendous success we are having with the economy & all things else, 91% of the Network News about me is negative (Fake). Why do we work so hard in working with the media when it is corrupt? Take away credentials?”

Interestingly, the Mail did not fail to prove Trump’s point, writing in its headline that the president’s proposal was the “latest attack on [a] free press.” This itself is fake news. 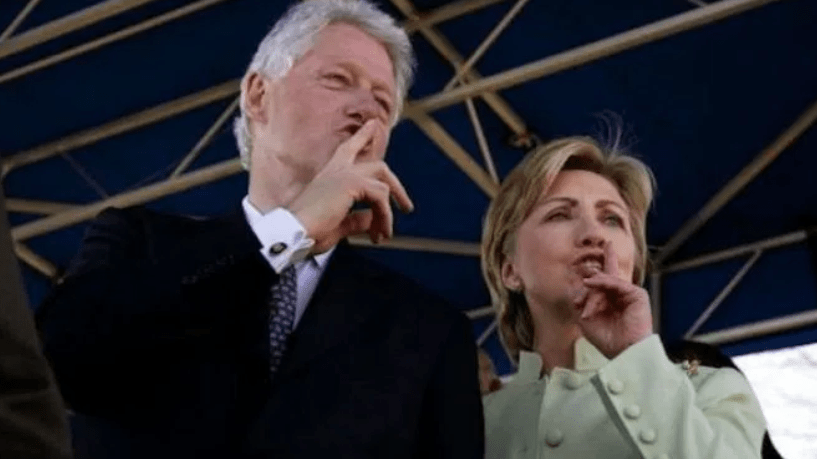 A major media company has tabled and potentially buried an investigative blowout on the FBI which implicates Robert Mueller, Andrew McCabe and even Hillary Clinton, according to well-placed sources.

True Pundit’s Thomas Paine has contacted the editor of the mainstream publication and put the large publisher on notice: Either publish the story or True Pundit will out the players involved in keeping the story hush and locked down for months.

President Obama and key members of his administration too could be implicated in the story, sources report.

The publisher has reportedly been sitting on the blockbuster story for five months. Now, FBI sources who contributed to the story are beginning to question the publication’s motives.

A cover up or merely editorial complications?

Below is an email Paine dispatched to the Big Media editor on Sunday demanding the release of this important story which details the FBI’s tangled role in negotiating the release of a U.S. citizen being held hostage abroad.

Paine’s correspondence, in part, details challenges for other news publications to gather Intel on the story:

“This is a timely and important story that neither we nor any other media has been able to develop and report because again, you’ve locked down sources. Normally we would work around this but this is a unique story and we do not have that luxury as the group of well-placed sources is very close knit.

“Cut it loose (publish it or kill it) or we can write about you not cutting it loose. And you can answer to other folks — including the loyal FBI-linked sources — why you sat on the story for months when the issue of FBI corruption is at its peak of national interest. That is not something I’d like to do but either way, the story gets out in the public domain.”

“We’ve extended a courtesy here,” Paine said. “I’ve worked major national stories but when a story sits in the tank for five and six months it indicates something larger at the publication is at play, something beyond the reporter’s control.

“The goal right now is to get the story in print. Mission here before ego. This story is too important not be be seen by the public”

One way or another.

If the story is not released this week, Paine said he will expose the publication and additional unredacted details. 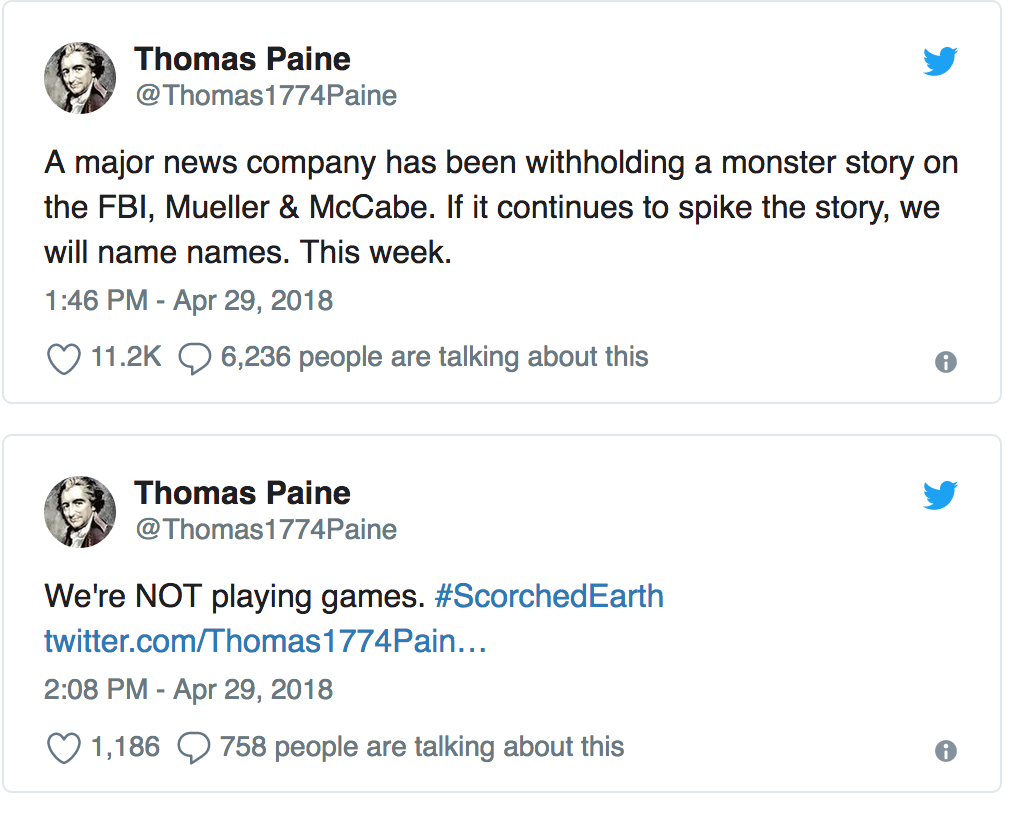 This filmed testimony by dozens of USS Liberty survivors demolishes Israel’s 'tragic accident' claim. Former Secretary of State Dean Rusk and former chairman of the Joint Chiefs of Staff Admiral Thomas Moorer are representative of the honored high-ranking Americans supporting the condemnation of deliberate aggression against the United States by 'ally' Israel.

'Loss of Liberty' makes clear that then-President Lyndon Johnson conspired with Israel and its Israel-First supporters inside the US government to support the 'tragic accident' scheme. Johnson was bogged down at the time in the Vietnam war, and thought he needed Israel Lobby support. Still, Johnson’s behavior is as unforgivable now as it was then.

During the Six-Day War, Israel attacked and nearly sank the USS Liberty belonging to its closest ally, the USA. Thirty-four American servicemen were killed in the two-hour assault by Israeli warplanes and torpedo boats. Israel claimed that the whole affair had been a tragic accident based on mistaken identification of the ship. The American government accepted the explanation. For more than 30 years many people have disbelieved the official explanation but have been unable to rebut it convincingly.

Now, Dead in the Water uses startling new evidence to reveal the truth behind the seemingly inexplicable attack. The film combines dramatic reconstruction of the events, with new access to former officers in the US and Israeli armed forces and intelligence services who have decided to give their own version of events. Interviews include President Lyndon Johnson's Secretary of Defence Robert McNamara, former head of the Israeli navy Admiral Shlomo Errell and members of the USS Liberty crew.

Regarding the 7/7/2005 terrorist attacks in London, let us look at the facts, and what we were told, and compare them. Then, using Ockham’s Razor and common-sense, let us see what conclusions are to be drawn, so we can all understand what most likely really did happen that day. 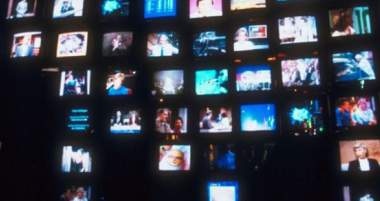 “These findings are troubling, no matter how you define ‘fake news.’ Confidence in an independent fourth estate [a name often used for the media] is a cornerstone of a healthy democracy. Ours appears to be headed for the intensive care unit,” said Patrick Murray, director of Monmouth University Polling Institute, in summarizing the results of its poll, taken from March 2-5 of this year of 803 adults in the United States. Setting aside the fact that America is supposed to be a federal republic, rather than a “democracy,” as Murray called it, the poll results are rather startling.

Perhaps the most important finding from this poll about the news business is that a majority of Americans are highly skeptical of the honesty of the mainstream media. Forty-two percent in the poll (a plurality) said that traditional news media deliberately report “fake news” for the purpose of advancing a particular agenda. Twenty-six percent judged that the reporting of “fake news” is due to journalistic incompetence — either by accident or shoddy work, failing to check sources accurately. Seven percent said both reasons — the deliberate and the accidental reporting of fake news — happen.

It has long been recognized that the greatest power of those in the media is that they “set the agenda": they decide what to report, leaving the consuming public to conclude that what the media is reporting on is what is important. A good example of this is the media’s obsession with the alleged collusion between the campaign of Donald Trump and the Russian government, though as of yet there is zero evidence of collusion and much evidence that this was a contrived scandal by liberal loyalists in the White House and the intelligence agencies. If the media doesn’t cover something, then the logical conclusion would then be that it is not important, such as the media's refusal to cover the Clinton's collusion with the Russians in the Uranium One scandal. Another recent example of this is the failure of the liberal media to even report on the new Chappaquiddick movie, due to open in theaters on Friday. Jason Clarke, who plays Senator Edward Kennedy in the film, told Deadline that Bill Maher and Rachel Maddow “passed on covering the film.”

Liberal publishers have gained about 2 percent more web traffic from Facebook than they were getting prior to the algorithm changes implemented in early February.

On the other hand, conservative publishers have lost an average of nearly 14 percent of their traffic from Facebook.

This algorithm change, intentional or not, has in effect censored conservative viewpoints on the largest social media platform in the world. This change has ramifications that, in the short-term, are causing conservative publishers to downsize or fold up completely, and in the long-term could swing elections in the United States and around the world toward liberal politicians and policies.

Case in point: Two rival publishers in New York City, the New York Post and the New York Daily News, are similar in many ways, except for their editorial slants. The Post is well-known as a right-leaning outlet, whereas the Daily News has an established left-leaning slant. For example, the Daily News recently ran a headline after the Parkland shooting that read, “Brave Florida survivors plan day of action for gun sanity and to call out ‘blood on hands’ of NRA puppets.”

Headlines like that garnered the Daily News a 24.18 percent increase in traffic from Facebook, while the right-leaning Post’s traffic dropped 11.44 percent in the same time period.