Florida GOP Congressman Matt Gaetz has filed an ethics complaint against House Intelligence Committee Chairman Rep. Adam Schiff for the way he has been handling the impeachment inquiry into President Donald J. Trump. Specifically, Rep. Gaetz says that Schiff has been "distorting  @POTUS ’s call with President Zelensky, Lying to the public about 'Russian collusion', and blocking members of Congress from attending impeachment depositions."

"Nancy Pelosi's impeachment resolution gives unprecedented power to the Intelligence Committee Chairman, Adam Schiff," Gaetz told reporters ahead of filing his complaint. "That's deeply troubling to me for a few reasons. First, Adam Schiff has proven in this process that he cannot adhere to the fundamental principles of fairness. Second, and I would say most important for my work today, is that Adam Schiff has violated the ethical rules of the House of Representatives."

I just filed an ethics complaint against @RepAdamSchiff over his handling of the impeachment inquiry into President Trump.

Schiff has lied to the American people and abused his power.

We won't allow him to continue trampling the Constitution. pic.twitter.com/TA8ONY2OtN

The breathtaking hypocrisy of many of President Donald Trump’s accusers is about to be fully exposed. If you’ve been watching the impeachment theater these past few weeks, you’ve no doubt heard the very serious crimes they accuse the U.S. president of having committed. They have accused him of using his office for political gain and pressuring Ukraine to help investigate former Vice President Joe Biden. The fake news media has begun a full-court press to sell the narrative of a besieged president who is slipping underwater, growing more and more unpopular by the day, as so-called whistleblowers and manufactured scandals surround him. The problem is, Trump neither looks nor acts like a president who is under siege. In fact, he looks to me like he’s having the time of his life. I believe that a big reason why Trump looks like he’s really enjoying himself these days is that he knows what’s about to go down.

Democrats have crossed over the line of partisan politics and have undertaken a seditious conspiracy to overthrow the people’s president. Nancy Pelosi should step down for betraying her oath of office and attempting to overthrow our great Republic.

Democrats have crossed over the line of partisan politics and have undertaken a seditious conspiracy to overthrow the people’s president.

Nancy Pelosi should step down for betraying her oath of office and attempting to overthrow our great Republic. pic.twitter.com/fSB05qYRmA 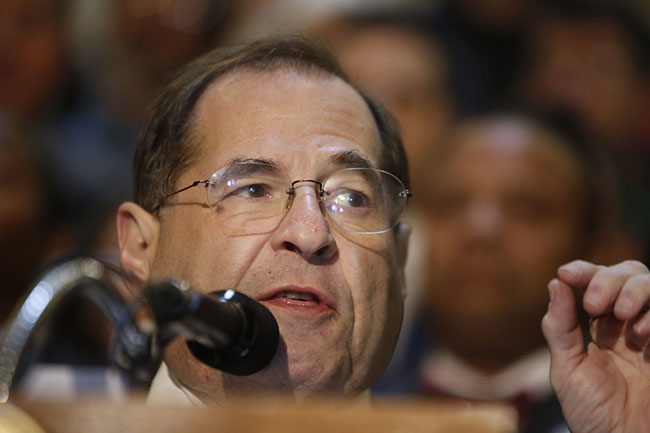 The impeachment of a president, parliamentary esoterica notwithstanding, involves three straightforward steps. First, the House authorizes the Judiciary Committee to open a formal impeachment inquiry. Next, that committee conducts an investigation to determine if the president has committed any offense justifying his removal from office. Finally, if such evidence is discovered, the full House votes to approve one or more articles of impeachment. The Democrats, despite their accusations of dark doings at the White House, can’t muster enough votes in the House to complete the first step toward removing President Trump. Consequently, Committee Chairman Jerrold Nadler has decided to conduct a fake impeachment inquiry.

Over the weekend, CNN reported that the House Judiciary Committee is prepared to vote next week on a resolution laying out the procedures for its investigation: “The vote, which is expected to occur on Wednesday, will lay out the ground rules for conducting hearings now that the committee has publicly announced it is considering recommending articles of impeachment against Trump.” Nadler has not merely abandoned two centuries of congressional precedent for impeachment; he is also opposed by nearly half of the Democratic House caucus. Only 134 of the 235 Democratic representatives favor the maneuver, and many adamantly oppose it. Rep. Tulsi Gabbard (D-Hawaii), who is running for the Democratic presidential nomination, puts it thus:

I don’t support impeachment. You know, I think it’s important for us to think about what is in the best interest of the country and the American people, and continuing to pursue impeachment is something that I think will only further tear our country apart.… We need to defeat Donald Trump. But I think it’s important for our country’s sake and our future that the voters in this country are the ones who do that.

This video explains the dark history and purpose of the use of mind control and pedophilia as a means of government espionage and blackmail.

At its heart is unearthed video of congressional victim testimony, given before a Bill Clinton advisory committee in 1995. How this video testimony has escaped the pubic discourse for over twenty years is a prime example of how deep the corruption runs in our society

In 1995, President Bill Clinton’s advisory committee on Human Radiation Experimentation included testimonies before congress from child victims involved in the experiments who claimed they were tortured, kept in cages, and used to sexually blackmail powerful politicians when they were only nine years old.

They claim to have been undergoing these experiments in government run laboratories along with several other young children.

The 1995 Human Radiation Experiment’s final report can still be found on the C-SPAN archives, but there is no archive of the child victim testimony.

Fortunately, the victim testimony was uploaded in 2015 to the YouTube “kollyvades” channel, entitled: “Mind Control Hearings from the President’s Advisory Committee on Human Radiation Experimentation.”

And the written transcripts are still available at the National Security Archive.

This information is crucial to understanding the depths of corruption that has infected our society for several decades. Please share this link everywhere.

He explains in the first episode of a new series called “The Drill Down with Peter Schweizer” that bank documents entered in a court case “shed light on just how much money [foreign] oligarchs were sending to the Biden family while he was vice president.