George Soros 60 Minutes Interview: Assisted the Nazis in Plundering His Own People and Enjoyed it!

Tucker is not backing down. Takes on Soros and his Prosecutors nicely… as they purposely increase crime everywhere

40 plus cities face an army of mainly leftist crybaby millennials that have descended on America.

Rather than respect the First Amendment that states, “…Congress shall make no law respecting the right of the people…peaceably to assemble, and to petition the government for a redress of grievances…”, that cherished freedom doesn’t include setting up piles of bricks for the protesters to hurl at will as we saw in Dallas.

You can’t make this stuff up.

Never, even in my fertile imagination, would I have guessed that we would find a smoking-gun 49-page memo revealing how George Soros operatives, including David Brock, were there at the genesis, the planning stages, with their hands on the ignition key, of the most concerted, well-funded, diabolical attack on free speech in the history of America.

But there it is.

Millions saw it on the DrudgeReport – including, no doubt, President Trump, Vice President Pence and Republican congressional leaders. But most Americans still know nothing of its existence – because it was not reported among the Big Media. They don’t want you to know about it. They would be embarrassed if America found out how they have been used and manipulated – from their focus on “Russian collusion” to other wild conspiracy theories targeting their No. 1 villain, President Trump.

It was nothing short of a plan to turn Google, Facebook and other social media into hyper-partisan Democratic Party activists, promoters, cheerleaders, and off-the-books donors in an effort to turn the country into a one-party state.

And they’re getting away with it, even though the beans have been spilled publicly. That’s partly because, as I have pointed out before, Google-Facebook control the media. They use the media. They manipulate the media. They choose winners and losers among the media. That’s real power that we have never seen before in American life.

The timing of this insidious plot is key. When did it begin? Right after Trump was inaugurated. That’s when the attacks on the independent, alternative media – WND, Breitbart, et al. – began. We’ve been feeling the squeeze ever since – through politically skewed algorithms and speech codes.

The recent wave of censorship of conservative voices on the internet by tech giants Facebook, Twitter, YouTube and Apple mirrors a plan concocted by a coalition of George Soros-funded, progressive groups to take back power in Washington from President Trump’s administration.

A confidential, 49-page memo for defeating Trump by working with the major social-media platforms to eliminate “right wing propaganda and fake news” was presented in January 2017  by Media Matters founder David Brock at a retreat in Florida with about 100 donors, the Washington Free Beacon reported at the time.

The Free Beacon obtained a copy of the memo, “Democracy Matters: Strategic Plan for Action,” by attending the retreat.

The memo spells out a four-year agenda that deployed Media Matters along with American Bridge, Shareblue and Citizens for Responsibility and Ethics in Washington (CREW) to attack Trump and Republicans. The strategies are impeachment, expanding Media Matters’ mission to combat “government misinformation,” ensuring Democratic control of the Senate in the 2018 midterm elections, filing lawsuits against the Trump administration, monetizing political advocacy, using a “digital attacker” to delegitimize Trump’s presidency and damage Republicans, and partnering with Facebook to combat “fake news.”

The Free Beacon in its January 2017 story said Brock sought to raise $40 million in 2017 for his organizations.

The document claims Media Matters and far-left groups have “access to raw data from Facebook, Twitter, and other social media sites” so they can “systemically monitor and analyze this unfiltered data.”

When the Nazis occupied Budapest in 1944, George Soros’ father was a successful lawyer. He lived on an island in the Danube and liked to commute to work in a rowboat. But knowing there were problems ahead for the Jews, he decided to split his family up. He bought them forged papers and he bribed a government official to take 14-year-old George Soros in and swear that he was his Christian godson. But survival carried a heavy price tag. While hundreds of thousands of Hungarian Jews were being shipped off to the death camps, George Soros accompanied his phony godfather on his appointed rounds, confiscating property from the Jews... And you [Soros] watched lots of people get shipped off to the death camps.

The wealthy have tucked billions into private nonprofits... where the IRS can’t touch it. 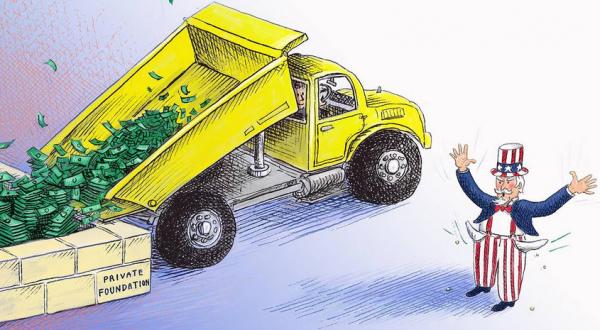 Congress is still scrambling to find ways to pay for its tax cut, so perhaps it should pay closer attention to last month’s news that George Soros had transferred $18 billion of his fortune to a private charity that he controls. There it will be sheltered from the Internal Revenue Service forever. This may be the single biggest tax dodge in U.S. history, yet no one on the right or left seems to have raised an eyebrow.

True tax reform is predicated on the principle that all income should be taxed at a low rate once, and only once. But much of the wealth that Mr. Soros spent years moving into his Open Society Foundations will never be taxed. A gift of billions of dollars of appreciated stock escapes any capital gains tax, and the estate tax as well. So Mr. Soros can donate appreciated stock that Open Society Foundations can liquidate without the government ever taking a cut.

There’s more. When a person donates untaxed, appreciated assets to a private foundation, he may also deduct up to 20% of its market value on his personal return, carrying forward this deduction for five years. This double write-off may be the sweetest deal in the tax code.

The donors also can retain control of the money within the private foundation for years or even decades before it is disbursed. Since the foundation can employ family members at six-figure salaries for life to “administer” it, the umbilical cord to the donor never has to be cut.

Congress should stop ignoring this tax-avoidance scheme. The super rich have already poured hundreds of billions into private foundations, but the figure could soon be in the trillions. Mark Zuckerberg has pledged to give away 99% of his Facebook shares, currently estimated to be worth somewhere around $70 billion, and much of it will go to a foundation his family controls. Bill Gates and Warren Buffett have each put roughly $30 billion tax-free into the Bill and Melinda Gates Foundation. This has left the foundation so flush that it spent $500 million on a 12-acre, 900,000-square-foot office complex in Seattle for its 1,500 employees. This is philanthropy?

I don’t question these billionaires’ right to do with their money as they wish. I’m simply arguing that Congress shouldn’t let the rich and politically powerful use private foundations to escape taxation. This loophole is one reason for an anomaly in our otherwise progressive tax code: The top 1% of earners pay an effective tax rate of 23%, but the top 0.001% pay only 18%.

Mr. Buffett has sanctimoniously denounced the fact that he pays a lower effective tax rate than his secretary. His suggestion is that Congress raise taxes on capital gains. But even if the tax rates were lifted, say, to 50%, Mr. Buffett still wouldn’t have to pay it on the tens of billions of dollars he puts into private foundations, and he would still be able to deduct a fifth of that contribution on future tax returns.

This tax favoritism might be defensible to promote genuine philanthropic activities.

Many billionaires, such as the Gateses and David Koch, have heroically donated to fight cancer and malaria or provide relief to hurricane and earthquake victims.

But others, including Mr. Soros and Michael Bloomberg, have turned private foundations into massive de facto lobbying operations for bigger government and liberal causes like higher minimum wages, gun control, universal health care, and a carbon tax. Mr. Soros’s $18 billion gift alone is the equivalent of maybe 100 Heritage Foundations. This kind of weaponized philanthropy has the potential to undermine the American free enterprise system.

Yes, billions go to groups on the right, too, from Mr. Koch and others. But regardless of ideology, why shouldn’t tax be collected before the money is given away? What message does it send that the Republican tax-reform bills retain this trillion-dollar loophole for the super rich, at the same time as the House plan eliminates the adoption credit for middle-class families who want to help children?

One simple solution would be for Congress to apply the capital-gains tax to assets of more than $1 million before they are transferred to a charity. This could even finance cutting the capital-gains rate to 15% for everyone.

Alternatively (or perhaps in addition) Congress could cap deductions for any given household to $250,000 a year. Under this kind of plan, Mr. Soros would be able to write off only a tiny fraction of his multi-billion dollar gift.

This isn’t an argument against charity. But selfless and effective giving is not motivated by tax breaks. Two-thirds of Americans don’t itemize their deductions, yet millions give until it hurts. In the 1980s, individual donations to charities surged, even as the top tax rate—and thus the maximum value of the write-off—fell from 70% to 28%.

The question is whether a tax code that encourages dynastic family foundations is good for America. If Congress stopped letting billionaires pour money tax free into the foundation-industrial complex, it would go a long way toward lowering rates and making the tax code fairer for everyone. This would help the economy grow faster, which is the best way to help those in need. 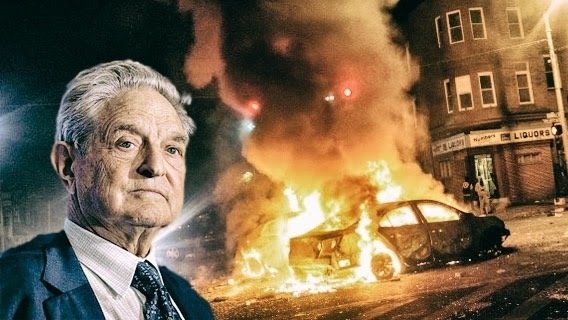 We the people ask the federal government to Propose a new Administration policy:

Whereas George Soros has willfully and on an ongoing basis attempted to destabilize and otherwise commit acts of sedition against the United States and its citizens, has created and funded dozens (and probably hundreds) of discrete organizations whose sole purpose is to apply Alinsky model terrorist tactics to facilitate the collapse of the systems and Constitutional government of the United State, and has developed unhealthy and undue influence over the entire Democrat Party and a large portion of the US Federal government, the DOJ should immediately declare George Soros and all of his organizations and staff members to be domestic terrorists, and have all of his personal an organizational wealth and assets seized under Civil Asset Forfeiture law.

McMaster is a foreign intelligence agent for the multi-national combine controlled by Soros, which explains why he’s constantly running interference to President Trump’s agenda.

“I have confirmed from sources from inside the White House, the Israeli government and Israeli intelligence that the Israelis have intercepted email communications from General McMaster to George Soros, informing him of everything that’s going on inside the White House,” reported Infowars correspondent Roger Stone. “…I have double checked this with two different sources very high up in Israeli intelligence, and I actually expect the Israeli ambassador to the US to confirm this.”

This means, by implication, that McMaster is one of the primary leakers given that Soros has vast ties to the mainstream media.

It is already known that McMaster was a member of International Institute for Strategic Studies which was funded by Soros’ Open Society Foundation and another Soros-financed group.