This is a very interesting take on the amazing things that are happening since Trump got into office. Suddenly many people are waking up, starting to think differently, escaping mental prisons on many levels.

We adulate celebrities so much, it's no wonder they're under the impression that we care about their political opinions. The truth is, we don't. In this video, Candace Owens, Director of Urban Development for Turning Point USA, lets unaware celebs in on the reality: no one cares what they think.

Former 'Dirty Jobs' host Mike Rowe on why we never seem to have 'safe spaces,' snowflake culture and protests at trade schools and why there's a plumber shortage

Trump was right. Some countries are shitholes. 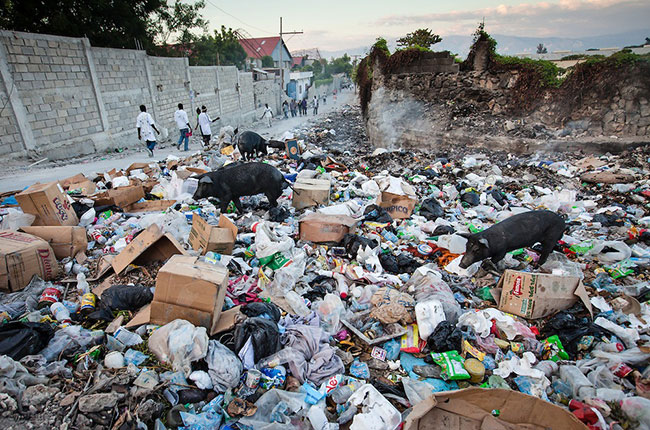 You aren’t a refugee who refuses to assimilate, who feels entitled to abuse his wife in any way he wants to, for any reason.

You’re not a member of the vicious MS-13 gang.

You’re not a pirate, a kidnapper, a street thug, or a drug dealer.

You’re one of the millions and millions of people who simply live out their lives where they are. You represent a FAR larger population than all the above categories put together.

You and your family call home a tiny shack in a large crowded city in an African country. Your family has existed in the throes of poverty and extreme hunger for many generations.

You drink water that is pumped directly from untreated sewage.

Garbage is strewn in the streets.

Riots and wars erupt from time to time, and so do epidemics, because no one in your neighborhood has a healthy body that can fight off germs.

All around the city there is fertile growing land, but most of it has been taken over by transnational agri-corporations.

I can predict with certainty that the last thing you care about is whether the president of the US has called your country a shithole.

You’re not circulating a petition protesting his remark and sending it to the United Nations.

You’re not watching outraged commentators on CNN excoriating the president.

You’re not reading tweets from liberals who are triggered by Trump.

You’re not watching You Tube videos made by college students in Boston.

You’re wondering whether your sick daughter is going to survive the night.

You do care about medical teams that sweep through the neighborhood and vaccinate everyone, because you’ve seen adults and children die after the shots.

You do know that the dictator of your country (the latest in a long line of psychopaths) has sold everything that isn’t nailed down, to foreign predatory corporations. You’re told that, half a century ago, there was a local leader who might not have been a psychopath; and the CIA killed him.

You do know that you and your people have been targets of exploitation for more than a hundred years.

If you were somehow made aware of Trump’s remark, you might wonder why no one is actually doing something to change the circumstances of life in your country. That’s the only question for you. And you don’t see any help coming.

You also know that chemicals from a mining company and a sugar company nearby have been seeping into the soil and making people sick and killing them. Why doesn’t someone stop that?

You aren’t analyzing what the Democrats and the Republicans are saying about a pending US immigration bill.

Every time doctors from foreign countries show up and label the latest round of illness and death with a disease name, you know they’re lying, because you can see, inside your shack, and out in the street, all the conditions that are destroying people.

So-called political correctness is not on your personal radar.

You don’t care who is sitting in the White House today or who sat in it yesterday. Trump, Obama, Bush, Clinton; it doesn’t matter. None of them have done anything to help raise up your people.

If someone told you about the uproar in the press and the capital city of the US, concerning Trump’ latest remark, you would see all that as just another way to distract people from the fact that YOUR people are sick and dying.

Who is talking about you?

They’re pushing back from the table after a meal in a room that has heat and insulation, and someone is taking a piece of plastic out of his pocket to pay for the meal, and they’re wearing new clothes, and they’re looking at their cell phones.

You know your country is a shithole. The point is: who made it that way? Who took a fertile paradise and turned it into a sewer?

You know how to fix your country.

Get back all the stolen land. Make small farms out of it. Return the land to the people who worked it and lived on it for centuries.

Does the US government care about that? Does the Russian or the Chinese government?

Do the shitholes called Washington and Moscow and Beijing care?

You may not know the word “Globalism,” but you do know you’re a pawn and a target in a big operation, and the operation involves stealing everything your family once had. The big criminals may have fancy ideas about why it’s a good thing “for the world,” but you don’t know about that, and you wouldn’t care if you did.

You just want to drink a glass of clean water for once in your life.

You want the piece of land your great-great-grandfather used to own, you want to get out of the city and breathe real air again.

You want soil that isn’t filled with poison from factories and mines and big company farms.

There isn’t any mystery about it.

The idea that some big shot called your country a shithole? That would be a good thing…

If he did something about it.

But you aren’t in the equation.

The people who are talking to each other about what the president said, when he was talking, aren’t looking at you. They don’t know you. They never will.

You’re one of the millions and millions of people who will live out their lives where they are.

What a US president said is the least of your worries. The people who are worried aren’t worried about you.

You’re just trying to keep your sick daughter alive through the night.

You know there has to be revolution in your country. You also know most revolutions are phony, staged to put a new psychopath in the palace. For starters, can you find ten good people who are smart, courageous, honorable, and willing? Who will mount a plan to eventually go up against the dictator and the foreign colossus behind him?

The odds are very long. But what else is there to do?

What people, thousands of miles away, are saying about what other people are saying is not on your mind.

If someone told you what the president of the United States said—and if you could, by some miracle, sit across from this president, you would say: “Sir, you called my country a shithole. It is really a beautiful place. It was. But you’re right. It’s turned into a shithole. Can you help us do something about that? Perhaps I see a glint of light, because finally a powerful leader used an accurate word to describe what has happened to us. You used a word that cut through many fairy tales. So, can you help us reclaim the land that was once ours? Forget about building roads and airports and hospitals and office buildings and malls. We just need our land back, and then we’ll figure out what we need to do ourselves.”

That would be a strange moment.

You aren’t a refugee who refuses to assimilate, who feels entitled to abuse his wife in any way he wants to, for any reason.

You’re not a member of the vicious MS-13 gang.

You’re not a pirate, a kidnapper, a street thug, or a drug dealer.

You represent a FAR larger population than all the above categories put together.

You’re one of the millions and millions of people who simply live out their lives where they are.

You want your land back.

Nobody is listening to you.

If you and millions like you could get their land back, you would start farming it, and you would turn the shithole where you live into something better.