In February 2009, the Obama administration commandeered a powerful supercomputer system known as THE HAMMER. THE HAMMER includes an exploit application known as SCORECARD that is capable of hacking into elections and stealing the vote, according to CIA contractor-turned- whistleblower Dennis Montgomery, who designed and built THE HAMMER.

SCORECARD has been activated to steal the vote on behalf of Joe Biden once again. Biden utilized THE HAMMER and SCORECARD while running for Vice President in 2012. Votes are again being stolen on Joe Biden’s behalf as he runs for President of the United States in 2020.

This time, SCORECARD is stealing votes in Florida, Georgia, Texas, Pennsylvania, Wisconsin, Michigan, Nevada, and Arizona, according to Montgomery.

SCORECARD steals elections by tampering with the computers at the transfer points of state election computer systems and outside third party election data vaults as votes are being transferred.

SCORECARD uses a prismatic scoring algorithm that Montgomery created, to achieve the desired results by those that control THE HAMMER and SCORECARD.

In Florida, one of the transfer points is VR Systems Inc, based in Tallahassee. Software vendor VR Systems operates in eight U.S. states.

CIA whistleblower Dennis Montgomery turned over a massive cache of illegally harvested surveillance and election data in August 2015 and December 2015 to the FBI and CIA under two immunity agreements that were granted to Montgomery by Assistant U.S. Attorney Deborah Curtis and FBI General Counsel James Baker.

Montgomery testified regarding SCORECARD and THE HAMMER while under oath and while being videotaped at the FBI’s secure Washington DC Field Office SCIF (Sensive Compartmented Information Facility). If CIA whistleblower Montgomery had lied about anything he would be in prison today for lying to the FBI. Montgomery is not in prison.

Director of National Intelligence John Negroponte invoked the State Secrets Privilege and the Government Protective Act against Montgomery in order to muzzle Montgomery and prevent him from revealing illegal acts that had been committed by the government.

The Obama Administration illegally commandeered THE HAMMER and SCORECARD. They moved THE HAMMER to Fort Washington, Maryland on February 3, 2009.

The Obama White House had an encrypted VPN in order to access THE HAMMER at will.

Florida voter registration disk removed and new disk inserted for redistricting via “THE HAMMER”
computer system in Fort Washington Maryland- via Navy Intel cover...
(they stole the Florida election via re-districting in Florida? How many other states did Brennan and Clapper do this?) 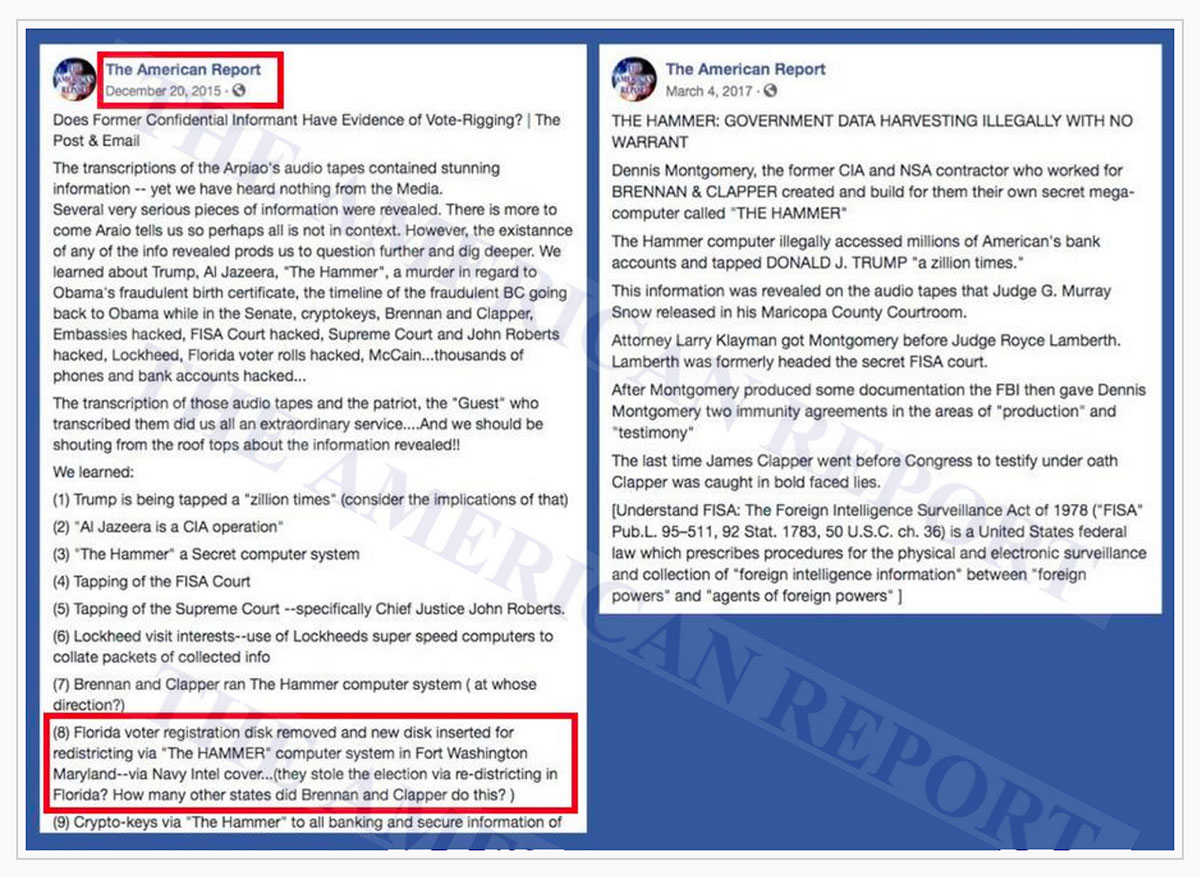 Can I just — I’m turning to the Bureau to describe this. So his client was an individual named Dennis Montgomery, who I believe, to the best of my recollection, he said that he had been a U.S. Government contractor and, in the course of that work, had come across evidence of unlawful surveillance by the government of Americans — and including government officials — and wanted to give that information to the Bureau, which eventually did take place.

It is of utmost importance to recognize that Robert Mueller’s FBI supplied the computers for THE HAMMER, according to Montgomery. Soviet dictator Joseph Stalin famously stated:

“I consider it completely unimportant who in the party will vote, or how; but what is extraordinarily important is this — who will count the votes, and how.”

This video was produced "before" the election to warn us about what the Democrats and Deep Staters were going to do.

Trackback URL for this entry: https://kickthemallout.com/trackback.php/V-Biden_Using_SCORECARD_and_THE_HAMMER_To_Steal_Another_US_Presidential_Election