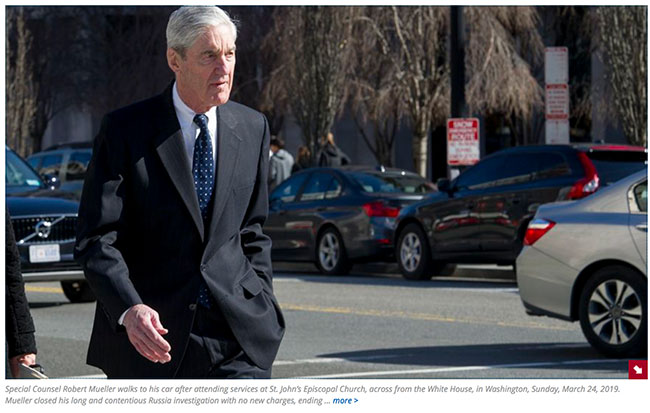 By Jeff Mordock
The Washington Times

Special counsel Robert Mueller vindicates President Trump of conspiring with Russia to influence the 2016 election, according to a summary of his findings released Sunday by Attorney General William Barr.

“The Special counsel recognized that ‘the evidence does not establish that the President was involved in an underlying crime related to Russian election interference,” Mr. Barr wrote.

“The Special Counsel did not find that the Trump campaign, or anyone associated with it, conspired or coordinated with the Russian government in these efforts, despite multiple offers from Russian-affiliated individuals to assist the Trump campaign,” Mr. Barr also wrote.

Mr. Barr also said Mr. Mueller did not reach a conclusion on the president’s firing of former FBI Director James Comey did not constitute obstruction of justice. But Mr. Barr said he could not find any evidence in Mr. Mueller’s conclusions that Mr. Trump obstructed justice.

“The report identifies no actions that, in our judgment, constitute obstructive conduct, had a nexus to a pending or contemplated proceeding, and were done with corrupt intent,” Mr. wrote.

Mr. Mueller finished his nearly two-year probe and turned his report into Mr. Barr on Friday. The attorney general spent the weekend reading the report along with Deputy Attorney General Rod Rosenstein, the man who initiated the special counsel in 2017.

The investigation has dogged Mr. Trump, his family and others in his orbit during the campaign, the presidential transition and his time in the White House.

Donald Trump Jr. and Mr. Trump’s son-in-law, Jared Kushner, both had been rumored to be targets for their role in arranging a 2016 Trump Tower meeting with a Russian lawyer who promised dirt on his Hillary Clinton.

Mr. Mueller ended his probe without a public indictment of them. Indeed, while he brought dozens of charges against others in the Trump orbit, those all stemmed from concealing information and financial crimes of their own making, rather than conspiracy to subvert the election.

Yet the lack of charges is not necessarily a full exoneration.

Justice Department regulations prohibit releasing damaging information about an individual who is not being charged with a crime.

Congressional Democrats, though, have demanded Mr. Mueller’s full report to Mr. Barr be made public. Democrats have also told Mr. Mueller to preserve all of his work, signaling that Congress will want to see his raw materials and perhaps pursue its own investigations.

They have already publicly discussed subpoenaing Mr. Mueller to testify before Congress.

Democrats say they fear an attempt to cover up information damaging to the president.

“If the Justice Department doesn’t release the whole report or tries to keep parts of it secret, we will certainly subpoena the parts of the report and we will reserve the right to call Mueller to testify before the committee or to subpoena him,” House Judiciary Committee Chairman Jerry Nadler, D-N.Y., said in a statement

The Cohen case was brought by federal prosecutors in New York based on information Mr. Mueller turned over. Cohen says Mr. Trump is implicated in campaign finance malfeasance, though no charges have been brought against the president.

While none of the Trump associates were charged with conspiracy to subvert the 2016 election, Mr. Mueller did uncover evidence that Russia did interfere.

He charged 25 Russians, accusing them of either hacking email accounts of members of Ms. Clinton’s campaign or organizing a social media campaign to spread lies and misinformation about the candidates on the Internet.

The Kick Them All Out Project
https://kickthemallout.com/article.php/William_Barr-Mueller_Clears_Trump_In_Russia_Probe