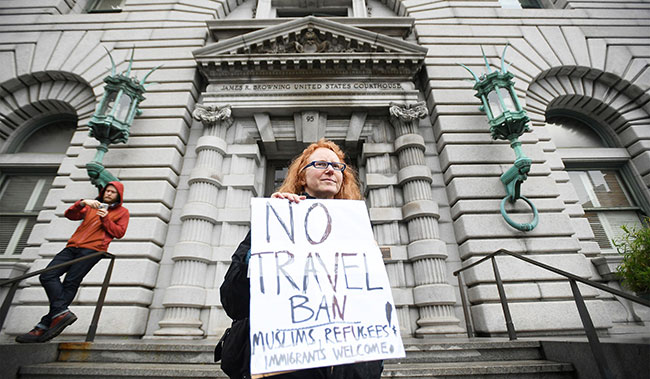 While we fill a Supreme Court vacancy, let’s also have that debate.

Whenever there is a Supreme Court vacancy, I view it as a chance to teach voters about the courts and their legitimate role in our government. We could use that. Last year, the Annenberg Center found that only 26 percent of those it surveyed could name the three branches of government (executive, judicial, and legislative). A full 33 percent couldn’t name even one branch.

Confusion about the proper role of the courts extends to many of our sitting judges. Last month, while the Supreme Court narrowly upheld the so-called Trump travel ban, Justice Clarence Thomas raised an issue that the next Supreme Court justice may have to weigh in on. Why is it, he asked, that a single federal district judge can impose an injunction blocking a presidential executive order in all 50 states even if none of his colleagues (599 district judges) thinks it’s a good idea?

These injunctions are beginning to take a toll on the federal court system — preventing legal questions from percolating through the federal courts, encouraging forum shopping, and making every case a national emergency for the courts and for the Executive Branch.

I am skeptical that district courts have the authority to enter universal injunctions. These injunctions did not emerge until a century and a half after the founding. And they appear to be inconsistent with longstanding limits on equitable relief and the power of Article III courts. If their popularity continues, this Court must address their legality.

Since January 2017, the “resistance” to President Trump has succeeded in getting 22 injunctions against his actions on issues ranging from the “Dreamers” to sanctuary cities and transgender policy in the military.

The U.S. survived without judges’ imposing nationwide injunctions for the vast majority of its history. The first such injunction came in a 1963 minimum-wage case, in which the D.C. Circuit Court ruled that executive-branch officials should honor a court decision “in all cases of essentially the same character.” But such injunctions have been rare until, well, the Trump administration.

Justice Thomas says their recent explosion calls for a rethinking of their validity because “no statute expressly grants district courts the power to issue universal injunctions.” He concludes that, as used today, they “boi[l] down to a policy judgment” about how judges define the limits of a president’s power. But that judgment is supposed to spring from the Constitution, not from the preferences of a black-robed figure.

Even after the Supreme Court made its definitive ruling in the 16-month-old travel-ban case, the “Resistance” made clear that it hasn’t given up. On the very day the Court ruled, a total of 16 states and the District of Columbia sued to stop President Trump over his border-security measures. The suit was “forum-shopped” so it would be heard by a federal judge in the distinctly anti-Trump Seattle area.

In another ruling that came down the same day the Supreme Court acted on the travel ban, a federal district judge in California overturned an executive order Trump issued June 20: Parents crossing the border with their migrant children must have regular phone calls with their children and be reunited with them within 14 days, the judge ruled. Parents with children younger than 5 must be reunited by this coming Tuesday.

It is madness that a single federal district court judge can impose such an arbitrary deadline covering the entire country and not have his decision reviewed for weeks or months.

The Department of Health and Human Services has been tasked with reuniting the children. Alex Azar, the HHS secretary, has said that he will comply with those artificially imposed deadlines, but at a cost: Some of the “parents” being reunited with children are actually in league with smugglers, he noted. In a conference with reporters last Friday, Azar said:

Proper and careful vetting for child safety is essential. . . . Two purported parents were identified in ICE criminal background checks as having criminal history that were inconsistent with child safety. For example, these purported parents had a history of charges of child cruelty, rape, and kidnapping based on information revealed by ICE. . . . [But] we will comply even if those deadlines prevent us from conducting our standard or even a truncated vetting process.

It is madness that a single federal district court judge can impose such an arbitrary deadline covering the entire country and not have his decision reviewed for weeks or months. No one wants children separated from their parents, whether they are U.S. citizens or migrants, but many of these largely Central American parents bringing their kids across the border have made an unfortunate choice.

As Hans von Spakovsky, a scholar at the Heritage Foundation, points out, such parents passed through Mexico and other nations that have their own generous asylum laws. By not seeking asylum in those countries, they are sending a strong signal that they are illegally entering the U.S. to better their economic condition rather than to escape persecution.

Of course, something must be done to clean up our archaic immigration laws that make it impossible to issue regulated work visas for legitimate job seekers (such as we had until the 1960s) while also making it almost impossible to send back people who are abusing the system. Congress has failed to act, but the solution is not to have a single, unelected federal district judge make determinations on what our nationwide immigration policy should be

If the confirmation hearings and debate about President Trump’s Supreme Court nominee can bring some of those issues forward, we might have the beginnings of a more rational debate on just what legitimate power judges have and how some are currently abusing it.

Trackback URL for this entry: https://kickthemallout.com/trackback.php/Why_Should_A_Single_Federal_Judge_Be_Able_To_Make_Law_For_The_Whole_Country