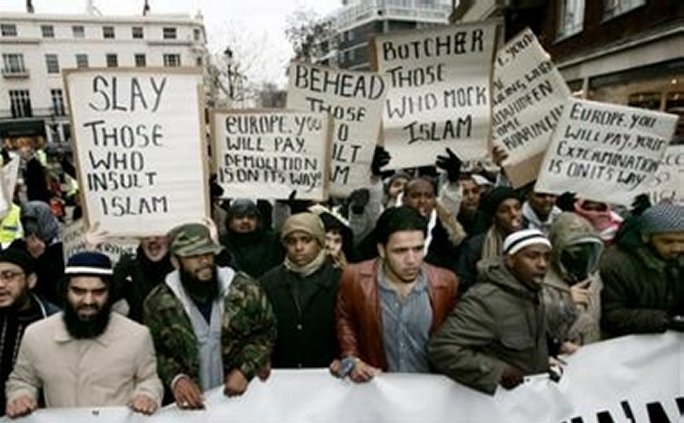 “The Quran teaches fear, hatred, contempt for others, murder as a legitimate means for the dissemination and preservation of this satanic doctrine. It talks ill of women, classifies people into classes, calls for blood and ever more blood. Yet, that Muhammad, a camel trader, sparks uproar in his tribe, that he wants to make his fellow citizens believe that he talked to the archangel Gabriel; that he boasted about being taken up into heaven and receiving a part of that indigestible book there, which can shake common sense on every page, that to gain respect for this work, he covers his country with fire and iron, that he strangles fathers, drags away daughters, that he leaves the beaten a free choice between death and his faith; now this is certainly something that no one can excuse, unless he came as a Turk into the world, unless superstition has stifled any natural light of reason in him.” Voltaire 1694-1788

Where Islam gains a foothold in any host country, conflict ensues at the local level until it boils over onto the national stage. While Moslems lay low in the beginning stages of their “hijrah” (‘seeding’ as advocated by the Quran to spread Islam) of host countries, as their numbers grow, they push for Sharia Law.

Today in Canada, America and Europe—Moslems dictate the rules with millions of followers creating parallel societies inside of Western countries. Once they arrive, no one understands why they fail to leave their barbaric rituals and become modernized.

I spoke with fellow research journalist Peter Goodchild on his understanding of Moslems in Western countries. Could you give us an idea as to how and why Moslems cannot and do not assimilate into Western countries?

“The Muslim world-view differs greatly from that of the Westerner,” said Goodchild. “Largely because Muslims are tribalist. There are many forms of Islamic culture, and tribalism is very much an Arabic characteristic, but it is common throughout the Muslim world. Muslim tribalism is also similar to that of native people in the Americas, or in Africa. Allegiance is to the tribe, not to a “country.” Arabic countries did not even exist until such political entities were forced upon them in the 20th century by the British and the Americans. The essence of tribalism is that a man’s (and secondarily a woman’s) loyalty is to the tribe. (Even in my Omani classrooms in 2008-11, if there was a student in a class who was not in the same tribe as the other students, then there could be trouble.) Muslims have two names, just as Westerners do, but the big difference is that a Westerner’s last name is a family name, whereas a Muslim’s last name is that of a tribe.

“Because a Muslim belongs to a tribe, he is raised from birth to regard people outside his own tribe as enemies. Because other people are enemies, it is senseless to speak of a “crime” against them. For example, killing someone from another tribe is not “murder.” “Lawrence of Arabia” fell into this problem when he was trying to unite the Arabs and get them to side with the British against the Turks in WWI.

“The issue of tribalism came up — with apparently little awareness on the part of Westerners — in the last few years, when large numbers of Muslim migrants poured into Europe. Westerners were appalled by the “crimes” being committed. But from a Muslim perspective these were not crimes at all. And from a Muslim perspective, Westerners are basically subhuman because they have no tribes. Because they have no tribes it is senseless to say that a Muslim is committing a “crime” against such people.

“Again as in the Americas or in Africa, a member of a tribal society regards his women as his property. The more women the better! To a tribalist, a law enforcing monogamy is senseless. Why should a man be deprived of a chance to increase his women or his donkeys or camels? And why should a man have to accord a woman the same rights as a man?

“One can go beyond the above, and consider religion. Muslims commonly say that Allah appeared first to Moses, secondly to Jesus, and thirdly to Muhammad. Westerners understand only the first two stages and are therefore doomed by Allah. A Muslim feels no compassion for a Westerner, since the latter has not only no tribe, but no real religion

“What people such as Justin Trudeau, [Merkel, Macron, Trump, Theresa May, et al.] are doing is getting themselves elected as overlords of the Muslim tribes. The political unit is geographically somewhat larger than the Muslims are used to, but the concept of the Westerner as a subhuman pre-tribal enemy is already well in place.

“Westerners often use simple emotion-laden language, based almost entirely on Western assumptions about morality, to criticize Muslims for their “crimes,” or to criticize people such as Trudeau or [Trump] for helping Muslims. But to do so is to display the Westerner’s misunderstanding of the Muslim world-view. We can be appalled at tribal mentality, but it goes back thousands of years and should not be dismissed as merely some unfortunate aberration. In any case, without an understanding of that world-view, any moral objections are certainly simplistic — and somewhat misplaced. To deal with Islam one must first understand it.

“The above comments about Muslim tribalism are relevant to patterns of immigration in Canada, [America and Europe], but they are especially relevant to what can be called psychological warfare, “PSYOP” — warfare carried out by psychological devices rather than conventional weapons. Such warfare is often used by governments against their own citizens. Trudeau and his colleagues are experts at psychological warfare.

“Canadian leader Justin Trudeau is using Muslims, people who do not understand Western values, and would have no interest in such values even if they did understand them, as a means of asserting control over his own compatriots, Canadians — Westerners. In that sense, Trudeau is betraying his country.”

“Immigrants devoted to their own cultures and religions are not influenced by the secular politically correct façade that dominates academia, news-media, entertainment, education, religious and political thinking today,” said James Walsh, former Associate General Counsel of the United States Immigration and Naturalization Service. “They claim the right not to assimilate, and the day is coming when the question will be how can the United States regulate the defiantly unassimilated cultures, religions and mores of foreign lands?  Such immigrants say their traditions trump the U.S. legal system.  Balkanization of the United States has begun.”  Speech given by James Walsh in 1991

The Kick Them All Out Project
https://kickthemallout.com/article.php/Why_Muslims_Cannot_Assimilate_Into_Western_Countries