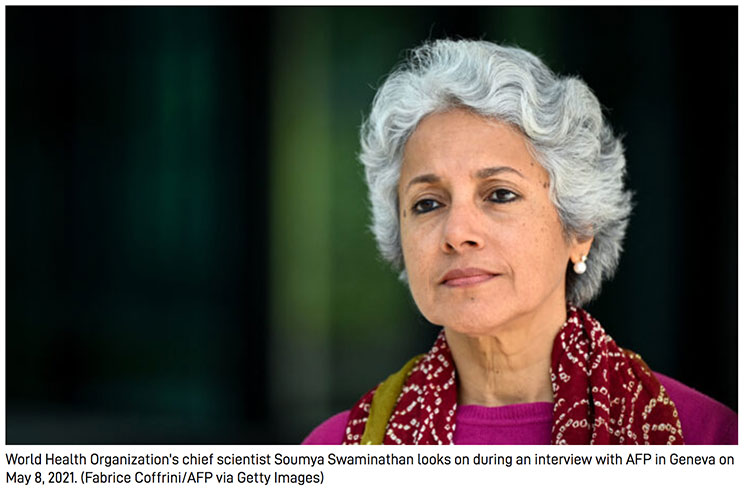 The Indian Bar Association has taken legal action against the World Health Organization’s (WHO) Chief Scientist Dr. Soumya Swaminathan for her alleged role in spreading disinformation on the use of ivermectin to treat COVID-19.

The association served a legal notice (pdf) on Swaminathan on May 25, claiming that she was “spreading disinformation and misguiding the people of India, in order to fulfill her agenda” and sought to prevent her from “causing further damage.”

They further say that Swaminathan, in her statements against the use of ivermectin, ignored research and clinical trials from two organizations—the Front Line COVID-19 Critical Care (FLCCC) Alliance and the British Ivermectin Recommendation Development (BIRD)—who have presented solid data showing ivermectin prevents and treats COVID-19.

“Dr. Soumya Swaminathan has ignored these studies/reports and has deliberately suppressed the data regarding effectiveness of the drug Ivermectin, with an intent to dissuade the people of India from using Ivermectin,” the plaintiff said in a statement (pdf).

In a May 10 tweet that has since been deleted after the notice was issued, Swaminathan wrote, “Safety and efficacy are important when using any drug for a new indication. WHO recommends against the use of ivermectin for COVID-19 except within clinical trials.”

Swaminathan made the Twitter post soon after Goa’s health minister announced that every Goa resident 18 and older would be given ivermectin as prevention regardless of their COVID-19 status, as part of the state government’s effort to stop the transmission of the virus. India has been hit hard in the second wave of the CCP (Chinese Communist Party) virus pandemic beginning in March 2021.

The legal notice calls for a clear response from Swaminathan on a number of key points, and the association said that in the case of a failure to provide a clear response, it reserves the right to initiate prosecution under sections of the Indian Penal Code and Disaster Management Act, 2005.

The WHO’s chief scientist didn’t reply to a request for comment. 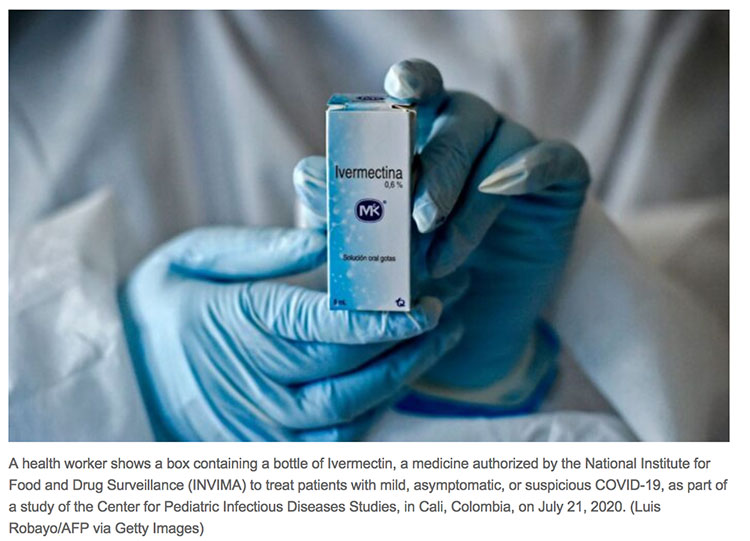 A link to Merck’s statement on ivermectin was also included in Swaminathan’s tweet. The pharmaceutical company that developed the anti-parasitic drug in the 1980s and held a patent until 1996 said in February of this year that the available data did not support the efficacy and safety of ivermectin beyond what the Food and Drug Administration (FDA) had approved it for.

Merck, in collaboration with Ridgeback Biotherapeutics, is conducting a Phase 3 trial of an investigational anti-viral drug molnupiravir, which the company says has shown to reduce infectious viruses quicker in COVID-19 outpatients. But unlike ivermectin, molnupiravir demonstrated no clinical benefit in hospitalized patients.

The trial is expected to complete later this October and Merck said it will apply for an emergency authorization use for the drug if results are favorable.

Researchers are hoping that molnupiravir will impair the CCP virus’s ability to replicate so as to prevent severe illness and hospitalization, something that ivermectin has demonstrated to do in a meta-analysis of 57 clinical trials involving more than 18,000 patients, according to ivmmeta.com, a website that provides real-time meta-analysis of ivermectin studies.

Proponents of ivermectin say the drug can treat all stages of COVID-19 and reduce hospitalization and mortality rates due to its anti-viral and anti-inflammatory properties. But there has been pushback on approving the drug as a COVID-19 treatment by the United States federal health authorities and the WHO.

The FDA says it hasn’t approved ivermectin for COVID-19 and issued a warning in early March informing people to not take the drug meant for animals, as the larger doses intended for animals may be harmful to humans.

While the National Institutes of Health (NIH), the largest medical research agency, is neither recommending for or against using ivermectin to treat COVID-19 in its updated guideline in February. This comes after members of the FLCCC Alliance presented their data to the agency at the beginning of the year.

In April, the NIH announced it would fund a large randomized, controlled study of seven repurposed drugs to treat mild to moderate COVID-19 patients. The research agency said it will begin enrolling for its Phase 3 trial on ivermectin next month.

“Trial enrollment is expected to open this month, and the trial is expected to run for up to 2 years,” an NIH spokesperson told The Epoch Times via email.

The WHO, in its Living Guideline, has advised against the use of ivermectin except in a clinical setting, citing inconclusive data similar to both the FDA and the NIH.

“The current evidence on the use of ivermectin to treat COVID-19 patients is inconclusive,” the WHO said in a press release. “Until more data is available, WHO recommends that the drug only be used within clinical trials.”

Dr. Pierre Kory, President and Chief Medical Officer of the FLCCC Alliance claims there is a concerted effort to censor information on the effectiveness of ivermectin against COVID-19, a disease caused by the CCP virus.

“There are forces that are seeking to make sure that ivermectin is not accepted widely as an effective therapy,” Kory said in an interview on June 1.

“We have randomized [trials], you have observational [studies], you have case series, you have epidemiologic analyses, and then the clinical experience of doctors. You can’t find a doctor who has incorporated ivermectin into their treatments who will come back and say my patients didn’t get better, you can’t find that doctor,” he added.

A screenshot of the results of a meta-analysis of 57 clinical trials
on the use of ivermectin in COVID-19 patients, from ivemmeta.com.

While ivermectin is yet to be approved as a treatment for COVID-19, doctors around the world, including in the United States, are offering the drug to their patients. And for doctors who refuse to administer the drug to patients suffering severe COVID-19, judges have had to order them to do so.

In their legal notice, the Indian Bar Association cited the case of 80-year-old Judith Smentkiewicz, who made a full recovery after being on a ventilator and told she only had a 20 percent chance of survival. Her family obtained a court order that allowed her to receive additional doses of ivermectin after doctors were hesitant to give her more than one dose, according to Buffalo News.

Smentkiewic’s family and attorneys say they believe that ivermectin saved her life.

Ivermectin is on the WHO’s list of essential medicines and has a high safety profile with more than 3.7 billion doses having been distributed in over 30 years.

Since the drug was first given to humans in 1987, there have only been 4,600 adverse events and 16 deaths reported on the pharmacovigilance database, according to Dr. Tess Lawrie in an interview on March 6. Lawrie is director of Evidence-based Medicine Consultancy Ltd. and co-founder of the BIRD panel, which includes international expert scientists and doctors who are advocating for the use of ivermectin to treat COVID-19.

Remdesivir, an anti-viral drug, is the only FDA-approved therapy for treating hospitalized COVID-19 patients. The drug has shown no effect on mortality and a minuscule benefit on time of recovery that even the WHO has recommended against its use last November.

A treatment course of remdesivir is a little over $3,000, while ivermectin ranges between $3 to $12 a treatment, according to Kory.

He also said that places in India where ivermectin is used preventatively or as early treatment, such as Goa and Uttar Pradesh, are seeing COVID-19 cases declining versus states that have banned the drug.

“Every one of those states, the curves are now precipitously declining,” said Kory.

“But there’s a state in India called Tamil Nadu whose minister there basically effectively outlawed ivermectin and went all-in on remdesivir, bought a whole bunch of remdesivir, [and] the cases and deaths in that state are skyrocketing,” he added.

The Epoch Times has reached out to the chief minister in Tamil Nadu for comment.

According to data by the Johns Hopkins University Center for Systems Science and Engineering, Tamil Nadu saw 20,421 new cases and 434 deaths on June 6, while Goa recorded 403 new cases and 16 deaths, and Uttar Pradesh reported 1,037 cases and 85 deaths.

Uttar Pradesh, one of the most populous states in India with over 200 million people, has been handing out free medical kits containing seven days’ worth of medication, one of which is ivermectin, for COVID-19 positive patients under home isolation.

The Kick Them All Out Project
https://kickthemallout.com/article.php/WHO_Chief_Scientist_Served_Legal_Notice_for_Allegedly_Suppressing_Data_on_Drug_to_Treat_COVID-19