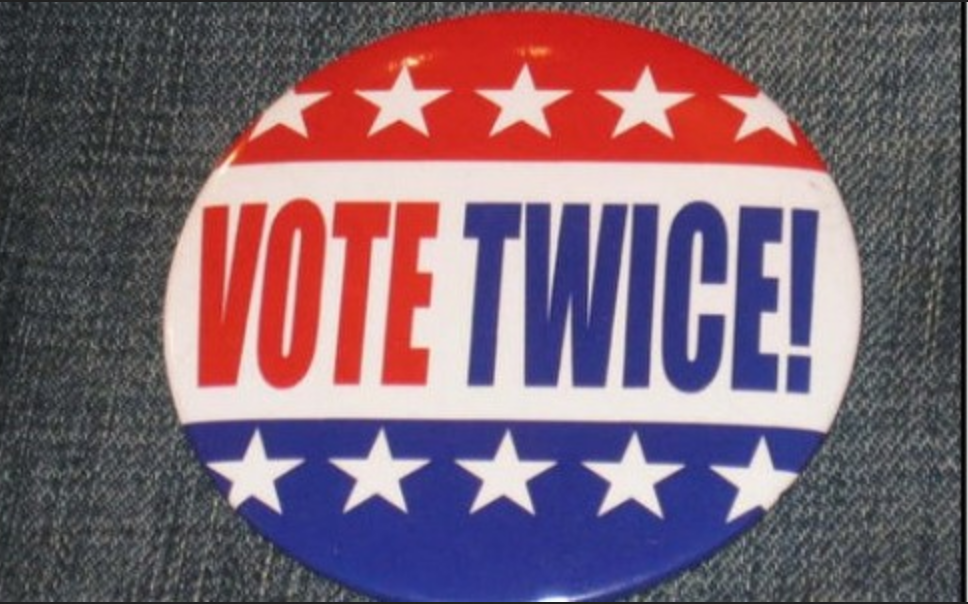 The federal government has confirmed organized voter fraud in America, with the arrests of six people who allegedly ran a fake-ID scam inside the Massachusetts Registry of Motor Vehicles.

In fact, WND reported only weeks ago a new study concluded as many as 5.7 million noncitizens may have voted in the 2008 election, suggesting the problem could be even bigger than what Trump estimated.

In Massachusetts, the U.S. attorney’s office said six people, including four RMV clerks, were arrested in connection “with a scheme to produce false identification documents through the Massachusetts Registry of Motor Vehicles.”

“Some of the false identities and addresses were used to fraudulently register to vote in the city of Boston.”

The federal report said the fake paperwork was based on Puerto Rican birth certificates and was used “to fraudulently register the clients to vote in the city of Boston.”

Washington watchdog Judicial Watch pointed out it had reported more than a year ago a rise of faked Puerto Rican birth certificates to obtain authentic U.S. documents.

“The case is the latest of many illustrating that there’s an epidemic of voter fraud in the U.S. that’s seldom reported in the mainstream media,” Judicial Watch said. “It’s not clear how many false identities and addresses were used to fraudulently register to vote in Boston, but the feds indicate that it occurred in multiple cases and Judicial Watch is investigating the matter as part of a five-year-old Election Integrity Project.”

The report continued: “The scheme was operated by four taxpayer-funded employees at the Massachusetts Registry of Motor Vehicles along with two outside accomplices who sold Puerto Rican documents to illegal aliens. All six were recently arrested and charged with aggravated identity theft. They probably never would have been caught if not for an anonymous tip received by the Massachusetts State Police nearly two years ago and there’s no telling how long the illicit scheme operated.”

The government “won’t reveal the magnitude of the operation and how many authentic state documents were issued fraudulently to illegal aliens,” Judicial Watch said.

“Last year Judicial Watch published a story about the increasing number of illegal aliens using fake Puerto Rican birth certificates to obtain authentic American documents,” the watchdog said. “Located about 1,000 miles southeast of Florida, Puerto Rico became a U.S. territory about two decades after the Caribbean island was acquired from Spain at the end of the Spanish-American war. Puerto Ricans are American citizens at birth though they don’t have the right to vote in federal elections and the island has only one non-voting representative in Congress.”

In recent years, an economic recession has triggered an exodus of Puerto Ricans not seen in years, Judicial Watch said.

The recent study on vote fraud was done by Just Facts, a research group in New Jersey.

It said it found that after examining post-election polling data, the number of noncitizens voting illegally in U.S. elections is likely far greater than previous estimates, the Washington Times reported.

As WND reported in March, many election experts believe the president is correct that widespread vote fraud exists, including illegal-alien voting.

However, they are reluctant to make estimates, because of a lack of hard data.

That, however, will change as information concealed by the Obama administration is released. Trump has commissioned Vice President Mike Pence to lead an investigation of vote fraud, and private groups are conducting their own research.

The White House investigation will include a look at outdated voter lists with names of dead people and multiple registrants.

Just Facts examined a new review of a Harvard/YouGov study of tens of thousands of voters, the Times said.

The data from the Harvard study previously was thought to support an estimate that between 38,000 and as many as 2.8 million noncitizens voted.

Just Facts’ analysis of the same Harvard polling data estimated that as many as 7.9 million noncitizens were illegally registered that year and 594,000 to 5.7 million voted.

The Times noted those numbers are more in line with the unverified estimates given by President Trump, who said voting by noncitizens is the reason Hillary Clinton ended up with a higher number of popular votes nationally. Clinton lost the only count that mattered, the state-by-state Electoral College vote, 305-232.

There is other documentation of voter fraud. For example, J. Christian Adams, who worked in the Justice Department’s Voting Rights Section under President George W. Bush and now is with the Public Interest Law Foundation, got voter-registration records from eight Virginia cities and counties. He confirmed 1,046 illegal aliens were illegally registered to vote.

John Fund, the author of several books on election fraud, told WND in March the Obama administration created an environment for vote fraud to thrive.

“When it comes to illegal votes,” he said, “we need to end the Obama administration’s consistent refusal to cooperate with states on allowing access to records of legal foreigners, illegal aliens and the Justice Department’s refusal to require states to maintain clear voter lists if they accept federal funds for voting purposes.”

Catherine Engelbrecht, founder of the Houston, Texas-based vote-monitoring nonprofit True the Vote, told WND “no one knows how many noncitizens are voting, because under the Obama administration, attempts to find answers were blocked at every turn.”

The Kick Them All Out Project
https://kickthemallout.com/article.php/Vote-Fraud_Scheme_By_State_Employees