Scholar: US Colleges Are ‘Breeding Grounds For Civil War’
Students taught to hate Western civilization, each other 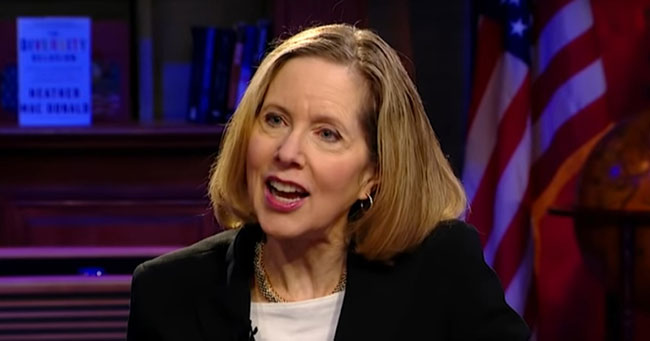 Mac Donald, regarded by many as a leading conservative intellectual and researcher, asserts that students are being trained to “hate” and obsess upon identity politics by predatory cultural Marxists in faculty and administration.

“Come the 80s, students were given a license for ignorance,” Mac Donald told Fox News host Mark Levin. “They were taught the only thing they needed to know about a book were the race and gender of the author to know whether it was thoroughly dismissable, without being read, and they could go on to instead wallow in their own delusional oppression.”

“It has only gotten worse since then, and what we are doing is breeding the grounds for, I fear, civil war,” she warned. “Because students are being taught to hate — to hate the greatest works of Western civilization, and frankly, to hate each other.”

“From the moment a student steps on college campus today as a freshman — or as a ‘freshperson’ I should probably say — the bureaucracy is determined to drum into that student’s head, identity politics, which says he’s either a victim or an oppressor,” she continued.

Mac Donald contends that this extreme manipulation of young minds is creating hordes of damaged collectivists who carry a “chip on their shoulders,” preventing them from “seizing the magnificent opportunities” and vast knowledge made available to them by modern society and technology.

“They carry this chip, this delusional victimology, into the world at large, and they are going around blaming American institutions of endemic racism and sexism when that no longer is true,” Mac Donald said.

Mac Donald’s comments echo sentiments she expressed in a recent article in the American Mind.

“The core sickness of the academy is not relativism but hatred,” Mac Donald wrote. “Students are taught to hate the greatest works of Western civilization, and to hate each other, based on the tribal trivialities of gonads and melanin.”

Mac Donald, a Fellow of the Manhattan Institute, made waves in 2016 with her bombshell PragerU presentation “Are the Police Racist?” analyzing police shootings and challenging the Black Lives Matter narrative.

The Kick Them All Out Project
https://kickthemallout.com/article.php/V-Heather_McDonald_Warns_US_Colleges_Are_Breeding_Hate