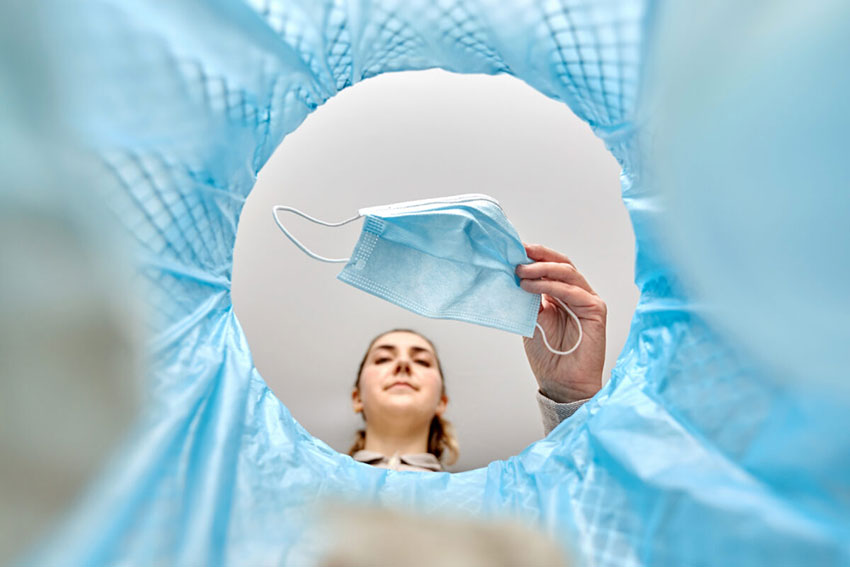 Microplastics used to make surgical masks were found in 11 of 13 patients undergoing lung surgery. Data demonstrate how these particles may cross into the bloodstream and could enter organs, the brain and developing babies.

Tiny bits of plastic about the size of a sesame seed or smaller are everywhere. News headlines often show intact plastic bags, rings and bottles as the primary threats to the environment — and these are indeed harmful to marine life and more — but the smaller, more insidious microplastic bits may even be more harmful. A study1 from Great Britain2 found microplastics in 11 out of 13 patients’ lungs.

Chemicals found in plastic products are known to act as endocrine disruptors.6 These chemicals are similar in structure to natural sex hormones, and they interfere with the normal functioning of those hormones in your body.7 This poses a particular problem for children who are still growing and developing.

The price that society will pay for the ubiquitous use and distribution of plastic particles has yet to be quantified. Evidence suggests that the long-term exposure to endocrine-disrupting chemicals like phthalates poses a significant danger to health and fertility.

The amount of plastic that enters the environment grows each year as manufacturers continue to produce products in disposable containers and consumers continue to demand a disposable lifestyle. At a time when advocacy groups warn that plastics are falling from the sky8 and have become a global tragedy,9 the COVID-19 pandemic has driven the plastic problem to even greater heights.

Study Finds Microplastics in 11 Out of 13 Patient’s Lungs

Decades of research have shown that people breathe in microparticles of air pollution as well as consume them in food and water. A 2021 autopsy study10 showed microplastics in 13 of the 20 people analyzed and over 20 years ago a 1998 U.S. lung cancer study11 found plastic and fibers in 99 of the 114 lung samples that were examined.

According to the Natural History Museum,12 microplastics measure less than 5 millimeters. They call microplastics “one of the greatest man-made disasters of our time.” While there are industrial uses for microplastics, most form when they break away from larger plastic products in the environment.

Primary microplastics are those produced in small sizes for industrial use, such as in sandblasters, cosmetics or microfiber clothing. Secondary microplastics result from the breakdown of larger plastic products caused by exposure to environmental stressors.13

They found microplastic contamination in 11 of the 13 patients.14 The team found 39 pieces in 11 lung tissue samples. Laura Sadofsky, senior lecturer and lead researcher in the study, commented on the importance of the results:15

“Microplastics have previously been found in human cadaver autopsy samples — this is the first robust study to show microplastics in lungs from live people. It also shows that they are in the lower parts of the lung. Lung airways are very narrow so no one thought they could possibly get there, but they clearly have.

This data provides an important advance in the field of air pollution, microplastics and human health. The characterisation of types and levels of microplastics we have found can now inform realistic conditions for laboratory exposure experiments with the aim of determining health impacts.”

Study authors found the subjects harbored 12 types of microplastics, “which have many uses and are commonly found in packaging, bottles, clothing, rope/twine, and many manufacturing processes. There were also considerably higher levels of microplastics in male patients compared to females.”16

Another unexpected finding was that a higher number of microplastics were found in the lower portions of the lung. The most abundant types of microplastics were polypropylene (PP) and polyethylene terephthalate (PET).17 This finding points to the recent ubiquitous use of blue surgical masks during the pandemic as PP is the most commonly used plastic component in those masks.

They said, “Surgical, cotton, fashion, and activated carbon masks wearing pose higher fiber-like microplastic inhalation risk …”19 and yet, according to Chris Schaefer, a respirator specialist and training expert, the masks used by millions of people throughout the world are not really masks at all.20

Schaefer calls these “breathing barriers” as they “don’t meet the legal definition” of a mask. He was emphatic that the surgical masks used by consumers throughout Canada, the U.S. and the world are shedding microplastics small enough to be inhaled.21

“A [proper] mask has engineered breathing openings in front of mouth and nose to ensure easy and effortless breathing. A breathing barrier is closed both over mouth and nose. And by doing that, it captures carbon dioxide that you exhale, forces you to re-inhale it, causing a reduction in your inhaled oxygen levels and causes excessive carbon dioxide. So, they’re not safe to wear.”

He encourages people to cut one open and look at the loose fibers that are easily dislodged within the product.22

“The heat and moisture that it captures will cause the degradation of those fibres to break down smaller. Absolutely, people are inhaling [microplastic particles]. I’ve written very extensively on the hazards of these breathing barriers the last two years, I’ve spoken to scientists [and other] people for the last two years about people inhaling the fibres.

If you get the sensation that you’ve gotten a little bit of cat hair, or any type of irritation in the back of your throat after wearing them. That means you’re inhaling the fibres.”

He went on to note that anyone exposed to these types of fibers in an occupational setting would be required to wear protection. Instead, people are using products that increase the risk of inhaling fibers that “break down very small and, well, what that’s going to do to people in the in the form of lung function — as well as toxicity overload in their body — I guess we’ll know in a few years.”23

German physician, Dr. Zacharias Fögen, published a study24 in the peer-reviewed journal Medicine, which analyzed data across counties in Kansas, comparing areas where there was a mask mandate against counties without a mandate.

He found that mandatory masking increased the death rate by 85%. The mortality rate remained 52% higher in counties that mandated masking even when the analysis accounted for confounding factors. Fögen writes that further analysis of the data showed that 95% of the effect “can only be attributed to COVID-19, so it is not CO2, bacteria or fungi under the mask.”25

He has named this the Foegen Effect which refers to the reinhalation of viral particles trapped in droplets and deposited on the mask, which worsens outcomes. He writes:26

“The most important finding from this study is that contrary to the accepted thought that fewer people are dying because infection rates are reduced by masks, this was not the case. Results from this study strongly suggest that mask mandates actually caused about 1.5 times the number of deaths or ~50% more deaths compared to no mask mandates.

The mask mandates themselves have increased the CFR (case fatality rate) by 1.85 / 1.58 or by 85% / 58% in counties with mask mandates. It was also found that almost all of these additional deaths were attributed solely to COVID-19. This study revealed that wearing facemasks might impose a great risk on individuals, which would not be mitigated by a reduction in the infection rate.

The use of facemasks, therefore, might be unfit, if not contraindicated, as an epidemiologic intervention against COVID-19.”

The second study28 was published in PLOS|One, which demonstrated there was an association between negative COVID outcomes and mask mandates across 847,000 people in 69 countries. The researchers estimated that ending the mask mandates could reduce new cases with no effect on hospitalization and death.

Past research has highlighted the impact microplastics have on the environment, wildlife and human health. However, many studies have not drawn an association between microplastic consumption or inhalation and disease. Instead, they identify research gaps and recommend further study.29

A paper30 published in April 2022 has suggested why this data has been inconsistent. The lab data was the first to find that microplastics damaged human cells at levels that are relevant to the number of particles humans ingest or inhale.

This suggests that past lab data using spherical microplastics may not fully represent the damage that microplastics cause to human health. Evangelos Danopoulos from Hull York Medical School in the U.K., who led the study, commented on why research is increasing: “It is exploding and for good reason. We are exposed to these particles every day: we’re eating them, we’re inhaling them. And we don’t really know how they react with our bodies once they are in.”31

Where Does Plastic Pollution Go in Your Body?

Researchers have found that tiny microplastics are not only deposited in your lungs and gut but can also be found floating in your blood. Researchers from The Netherlands analyzed samples32 from 22 healthy volunteers and found plastic particles in 77% of the samples. These particles were 700 nanometers or greater in dimension, which is a size that can be absorbed across membranes.

Some samples contained up to three different types of plastic. The study author told The Guardian “Our study is the first indication that we have polymer particles in our blood — it’s a breakthrough result. But we have to extend the research and increase the sample sizes, the number of polymers assessed, etc.”33

The researchers wrote that where these plastic particles end up in the body also requires further study. They stated that it’s “scientifically plausible” that the plastic particles are being transported by the bloodstream to organs, based, for instance, on data showing that 50, 80 and 240 nm polystyrene beads and microsized polypropylene can permeate the human placenta.34

After these microplastics cross the placental barrier, they end up in a newborn’s first feces. This means they migrate from the infant’s blood to the gut. A pilot study35 published in 2021 looked at the magnitude of human exposure to microplastics and found that the microplastic polyethylene terephthalate (PET) was found in meconium samples, which is a baby’s first stool.

The amount of PET in infant stool was 10 times higher than found in adult samples, which suggested that babies have plastic in their system that is absorbed from their mother. How this will affect the future of human health is still being studied. An animal study found that just 24 hours after maternal inhalation exposure, nanopolystyrene particles could be detected in the placenta and fetal brain, lungs, liver, heart and kidney.36

It appears that inhaling or consuming microplastics allows micro particles access to your bloodstream and then to your vital organs. While researchers have demonstrated that the irregularly shaped microplastics found in the environment cause cell damage and death, the long-term effects on disease have not been identified. Yet, you may be sure that cell damage and death do not occur without consequences.

Originally published May 25, 2022 on Mercola.com

The Kick Them All Out Project
https://kickthemallout.com/article.php/Microplastics_From_Masks_Found_Deep_in_Lungs_of_the_Living